UPDATE: (July 21, 2016) Following the release of HRC’s media action alert on Friday July 15, today, the Toronto Star published three letters (click here) in its print edition (2 which took Columnist Rick Salutin to task for his scathing commentary which vilified Elie Wiesel’s legacy and which attacked Israel with half truths and outright falsities). Seven letters in total were published on the Star’s website, 5 were pro-Israel and 2 were anti-Israel. They can all be read online by clicking here.

Special thanks to all HRC subscribers who wrote en masse to the Toronto Star! In so doing, you have affirmed that HonestReporting Canada’s efforts in combining media monitoring and grassroots mobilization can achieve demonstrable results. While one person alone may not make a difference, but a network of thousands united can be effective in fighting media bias against Israel. 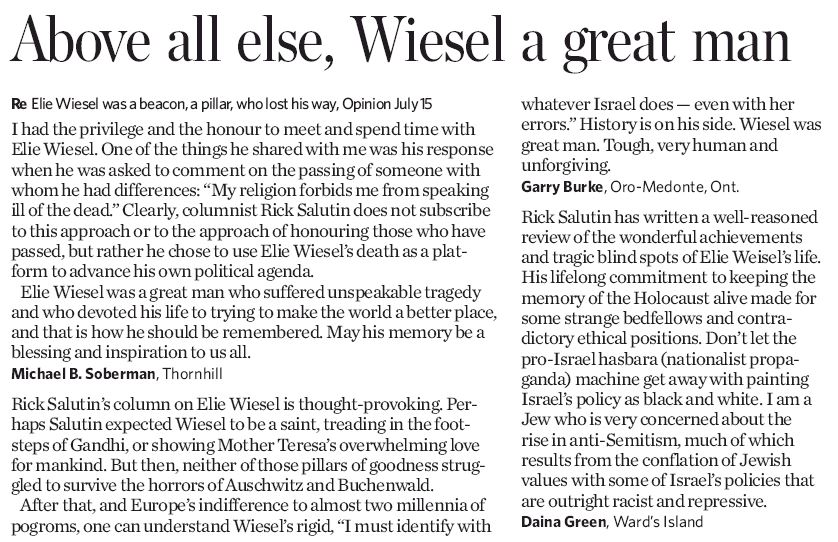 In a disgraceful attempt to vilify the legacy of Nobel laureate Elie Wiesel, Toronto Star Columnist Rick Salutin today attacked the revered hero as a moral beacon who “lost his way” and whose role became “troubling”. Salutin’s op-ed can be found online here or appended below.

While death certainly doesn’t confer sainthood, Wiesel deserves to be regarded in history as a principled man of conscience, a stalwart humanitarian, and a man of moral convictions.

As Prime Minister Justin Trudeau put it: “Elie Wiesel spent his life in service to humanity, keeping the memory of the Holocaust’s horror alive. It is for us all to carry this torch.” U.S. President Barack Obama paid homage to Wiesel by saying: “Elie (Wiesel) was not just the world’s most prominent Holocaust survivor, he was a living memorial. After we walked together among the barbed wire and guard towers of Buchenwald where he was held as a teenager and where his father perished, Elie spoke words I’ve never forgotten — ‘Memory has become a sacred duty of all people of goodwill.’ Upholding that sacred duty was the purpose of Elie’s life. Along with his beloved wife Marion and the foundation that bears his name, he raised his voice, not just against anti-Semitism, but against hatred, bigotry and intolerance in all its forms. He implored each of us, as nations and as human beings, to do the same, to see ourselves in each other and to make real that pledge of ‘never again.'”

Wiesel was a stalwart defender of Israel, and for that reason it seems, Rick Salutin condemned the Nobel Peace Prize winner. Full of half-truths, Salutin misleads in his commentary when claiming that Wiesel stood in “opposition to a U.S. peace with Iran.” In reality, Wiesel merely opposed the Iran Nuclear Deal as he felt it wouldn’t block Iran’s path to acquiring the bomb, but would pave it.

Salutin cavalierly wrote: “As recently as two years ago, Wiesel called Israel’s attacks on Gaza, which killed hundreds of children, entirely the fault of Hamas, who were practising ‘child sacrifice’ and ‘barbarism.’ His inevitably lofty moral justifications for these actions rang … dubiously.” Nowhere did Salutin condemn Hamas and other Palestinian terrorists for firing thousands of rockets at Israeli civilians, or tunneling into Israel to attack kindergartens. Nowhere did Salutin acknowledge the unprecedented efforts Israel took to safeguard the lives of innocents. Nowhere did Salutin condemn Hamas’ double war crimes: firing on civilians while hiding behind civilians.

Salutin whitewashed radical anti-Israel detractor Max Blumenthal, an activist who assimilated Israelis to the Nazis and whose book is popular on neo-Nazi websites as being “not anti-Israel”. This is the same Max Blumenthal who was recently condemned by Hilary Clinton’s campaign for making “offensive, hateful, and patently absurd statements about Elie Wiesel.”

Salutin’s comments come in stark contrast to the majority of outpourings from world leaders and dignitaries, public figures, and countless people who were touched by Elie Wiesel’s works, the life he lived, and his continued efforts. 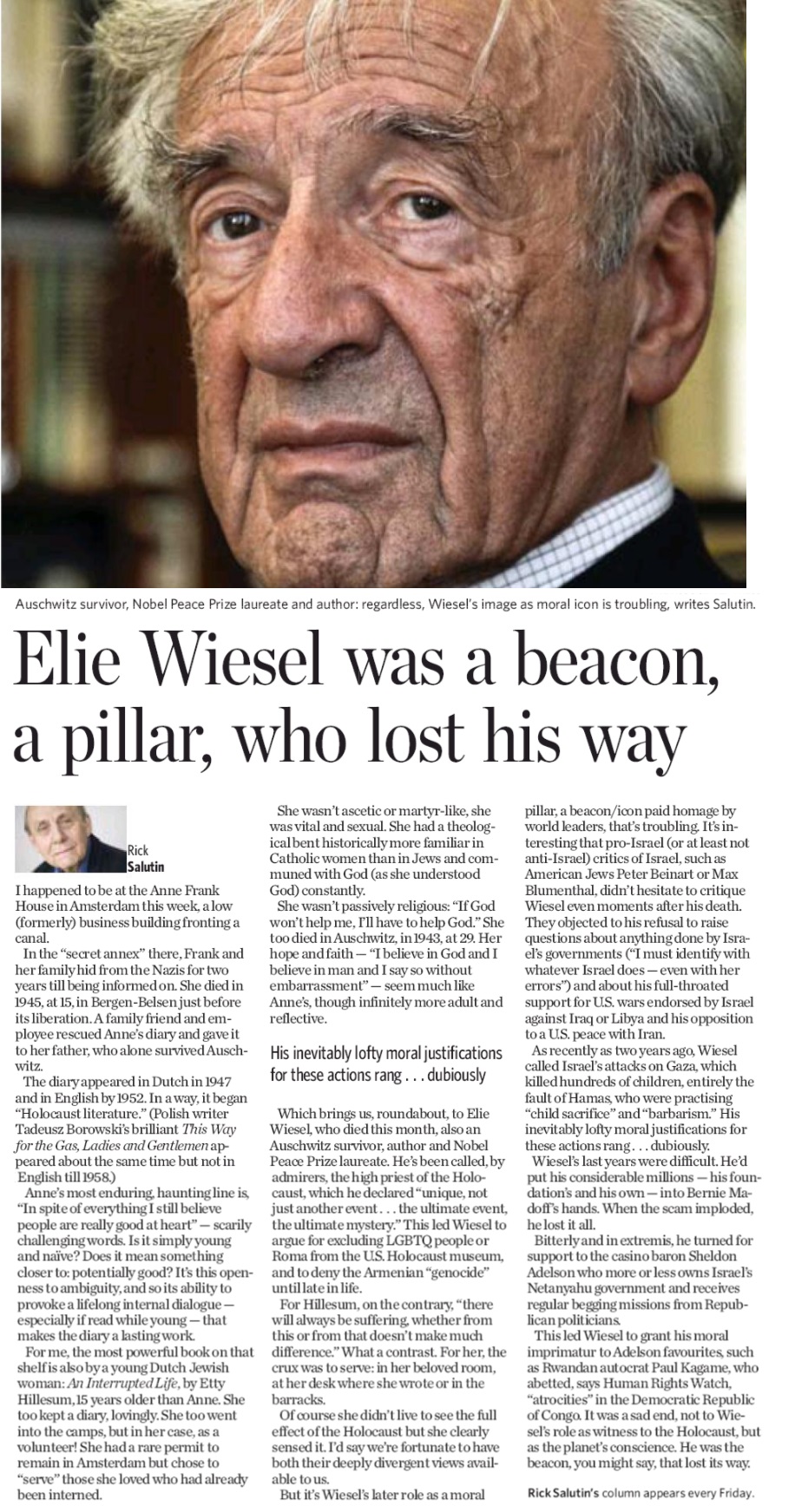