Following our media action alert where we condemned Toronto Star columnist Linda McQuaig for her nasty smear attack on Israel in her August 22 column which defended BDS, yesterday, the Toronto Star published 27 letters on the topic online and 19 letters in print. Of the 27 published on the Star’s website, 18 were anti-Israel letters and 9 were pro-Israel, and of the 19 letters in the Star’s print edition, 12 were anti-Israel and 7 were pro-Israel.

Naturally, the Star opted to have anti-Israel comments greatly outnumber the pro-Israel comments, but at the very least, many of HRC’s subscribers were published and their pro-Israel viewpoints were given a platform.

Yet again, this example ably demonstrates our impact and effectiveness in holding the media to account for their reporting of Israel. 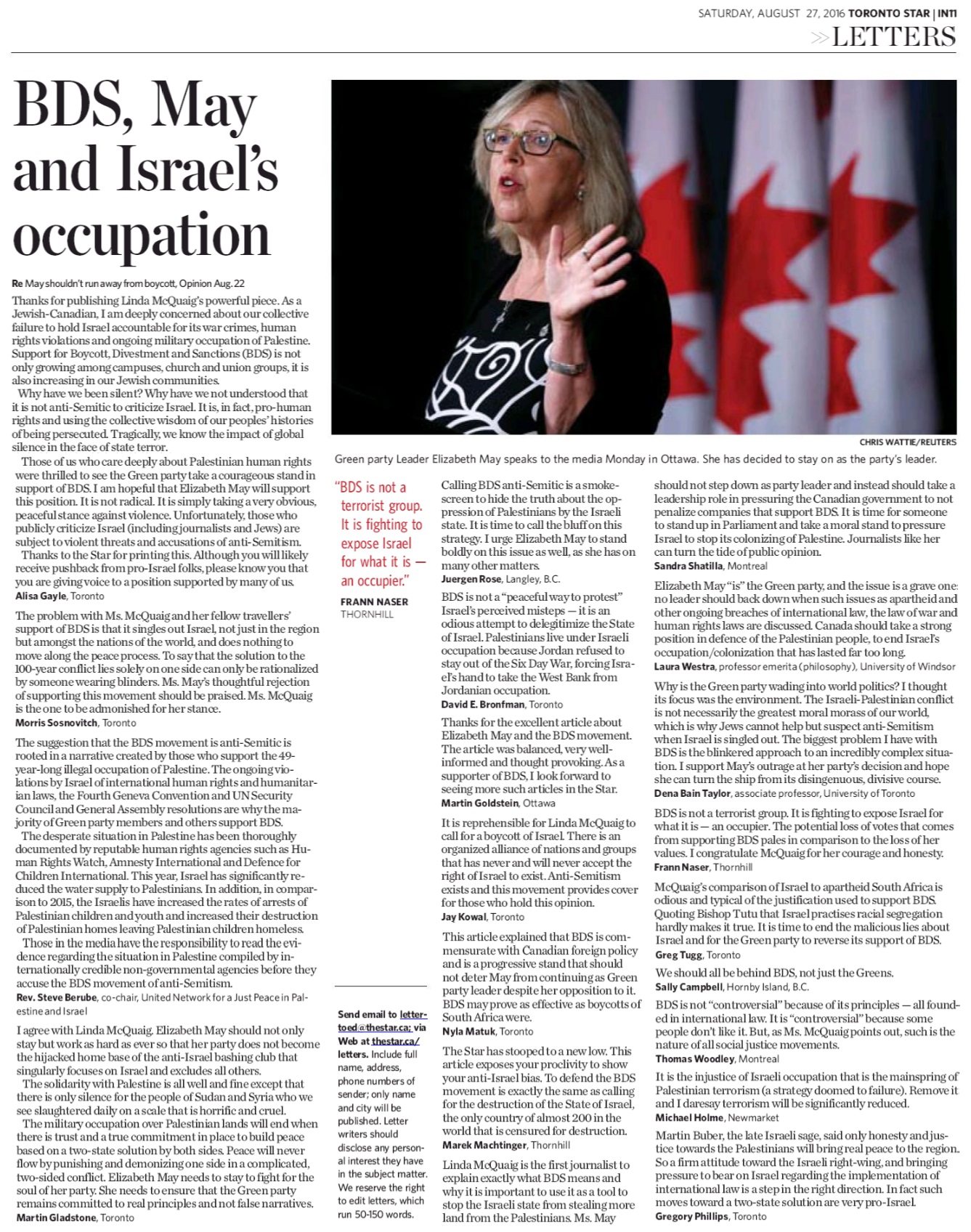 Writing in the Toronto Star today, columnist Linda McQuaig argued that “Elizabeth May shouldn’t run away from BDS” but should instead embrace it when saying that “It would take a leader with independence and courage to pressure Israel to end its military occupation – someone like Elizabeth May.”

According to McQuaig, a self proclaimed “journalist and author”: “Whether you agree with the boycott strategy or not, it is a peaceful way to protest a serious violation of human rights: the 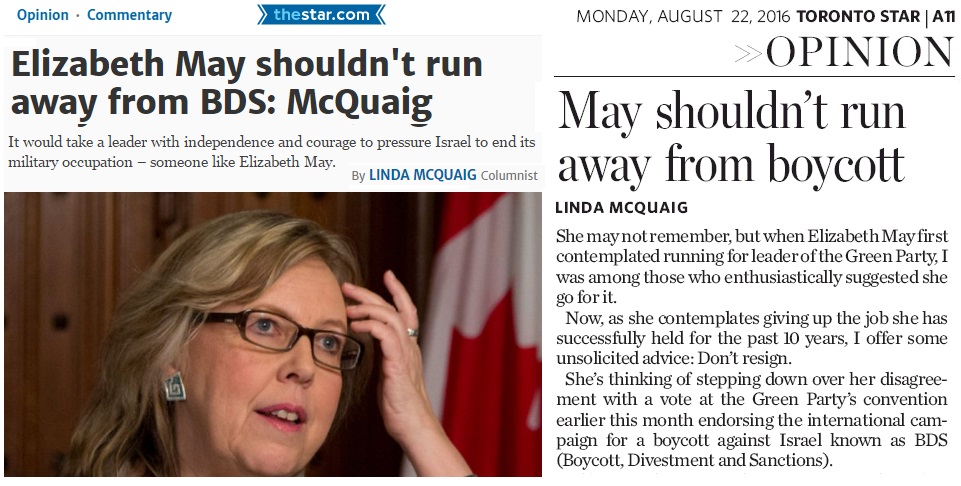 fact that millions of Palestinians have been living under Israeli military occupation in the West Bank and Gaza for almost 50 years, with Israel effectively annexing their land.”

(This is the same Linda McQuaig who in 2010 abhorrently likened Israel’s killing of 9 anti-Israel activists who initiated violence against interdicting Israeli forces on the Mavi Marmara flotilla vessel, to the brutal murder of an innocent Jewish-American on the Achile Lauro liner by Palestinian terrorists.)

To wit, why is the Green Party of Canada being more pro-Palestinian, than the Palestinians themselves? Consider the following words spoken by Palestinian President Mahmoud Abbas: “No, we do not support the boycott of Israel… We do not ask anyone to boycott Israel itself… we have relations with Israel. We have mutual recognition of Israel.”

Even the Palestinian’s own leader views BDS as counterproductive to the prospects of peace as it unfairly singles Israel out for opprobrium and doesn’t advance Palestinian interests.

While Ms. McQuaig is entitled to her own opinions, she’s not allowed to conjure her own facts. Importantly, in 2005, Israel disengaged its combined armed forces and over 8,500 settlers when it disengaged from the Gaza Strip. Israel does not “occupy” Gaza.

Lastly, there’s no truth to McQuaig’s smearing Israel as an “apartheid” state. In truth, Israel is a liberal and inclusive democracy, with a 20% Arab population which welcomes individuals irrespective of their faith, ethnicity, creed, sexual orientation, etc.

Please send a letter to the Toronto Star to counter Linda McQuaig’s odious defense of BDS and her smear attack against Israel. Send letters to: lettertoed@thestar.ca.

Olympics of Hate: Antisemitism at the World Games:...