What exactly is Linda McQuaig saying when she tacitly claims the “pro-Israel lobby” tail wags the Canadian political dog? This claim was made in the following September 27 Toronto Star column that she authored entitled: “Reactions to anti-Muslim video highlight political double standard”. 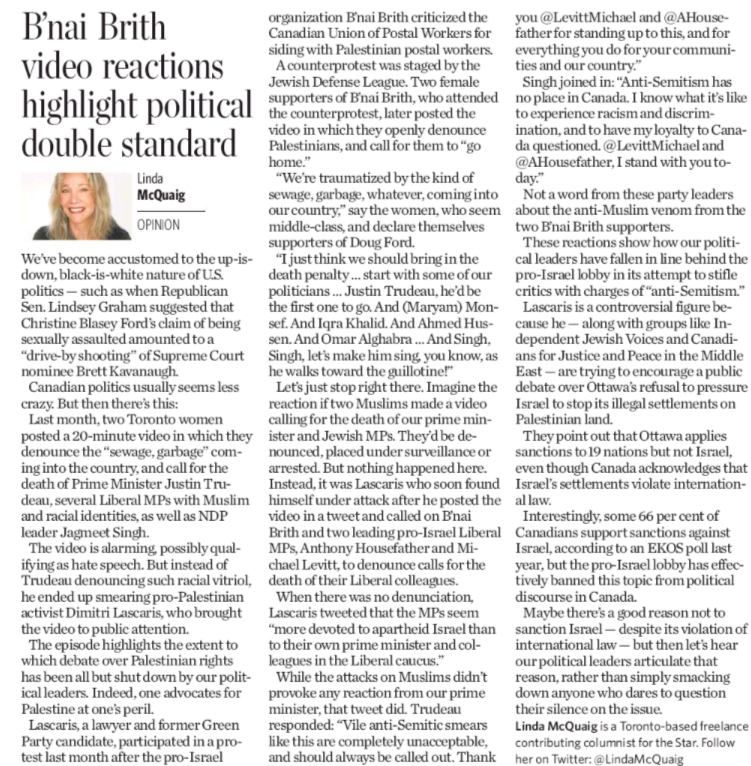 Substitute the word “Israel” with “Jewish” and you have a classic antisemitic Jewish conspiracy theory and trope which outrageously claims that a cabal of powerful Jews control government and as McQuaig argues, “political discourse” in our country.

Canada’s Ottawa Protocol on Combatting Antisemitism asserts the following: “Making mendacious, dehumanizing, demonizing, or stereotypical allegations about Jews as such or the power of Jews as collective – such as, especially but not exclusively – the myth about a world Jewish conspiracy, or of Jews controlling the media, economy, government or other societal institutions.”

Furthermore, when Dimitri Lascaris (Chairman of Canadians for Justice and Peace in the Middle East, CJPME) accused Jewish M.P.’s Anthony Housefather and Michael Levitt of being more loyal to Israel than Canada, Lascaris shamefully engaged in antisemitism.

This allegation, which was rightly condemned by the leaders of all federal parties, is antisemitic according to the Protocol and the International Holocaust Remembrance Alliance (IHRA) working definition of antisemitism.

To convey your concerns to the Toronto Star, please send a letter to the editor at: lettertoed@thestar.ca.