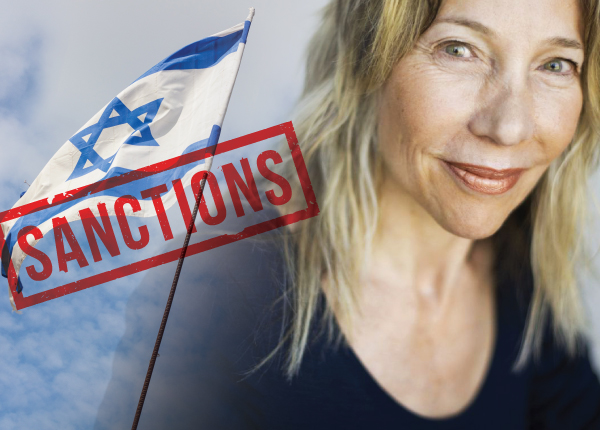 Today in the Toronto Star, columnist Linda McQuaig advocated that Prime Minister Trudeau should lift punishing sanctions that harm the vulnerable during this pandemic, but then audaciously called for Israel to be sanctioned and criticized by Canada.

Ottawa’s willingness to fall in line behind Washington is reflected in the fact it doesn’t impose sanctions against U.S allies Saudi Arabia or Israel, despite Saudi Arabia’s brutal murder of dissident Jamal Khashoggi and Israel’s illegal occupation of the West Bank. Even Israel’s announcement that it plans to annex the West Bank in July has produced no sanctions or criticism from Canada.” 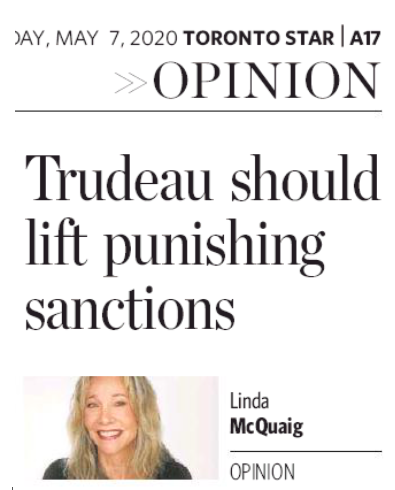 At the same time, McQuaig implicitly called for sanctions to be removed against state sponsors of terror Iran and Syria, and to Lebanon (run partly by the Hezbollah terror group), and to human rights offending countries like Venezuela, Libya, Somalia, Nicaragua and Yemen.

Yet Canada, ignoring the plea from the UN’s highest official, continues in the midst of the pandemic to impose sanctions on 20 nations, including Lebanon, Venezuela, Syria, Iran, Libya, Somalia, Nicaragua and Yemen.”

Leaving aside how morally bankrupt it would be to remove Canada’s sanction regime for these terror-supporting and human rights offending nations, why was Israel singled out by McQuaig? Simply put, Israel plans to apply sovereignty to the Jordan Valley and 30% of Area C territory per the Oslo Accords of Judea and Samaria (“west bank”) per the Trump peace plan and consistent with past U.S. peace proposals that have understood that Israel will retain these areas in a final peace accord.

Importantly, a nation cannot “annex” land which it has sovereign claims to. Israel doesn’t regard the “west bank” as “occupied” because there was no sovereign prior to the defensive Six-Day-War in 1967. Jordan illegally occupied and

administered the land from 1948-1967 after Israel’s War of Independence which was waged by pan-Arab armies seeking nascent Israel’s destruction. Jordan didn’t have sovereignty over the land which was ruled under British Mandatory Palestine. Israel says international law enshrines its rights to these lands, while citing pressing security concerns and biblical, historical and political connections to the land.

Thankfully, P.M. Trudeau is steadfastly opposed to BDS. In 2019 he said: “I will continue to condemn the BDS movement…We have to be very careful as a society and as a government and as a country not to sanction or support this new frame around antsemitism and undue criticism of Israel.”

Take action now! Linda McQuaig must be taken to task for her advocating the Canada sanction Israel and for implicitly suggesting that terror-supporting and rogue human rights offending nations have their sanctions removed. Send letters to the editor at the Toronto Star at: lettertoed@thestar.ca .Also, tweet your rebuttals @TorontoStar.