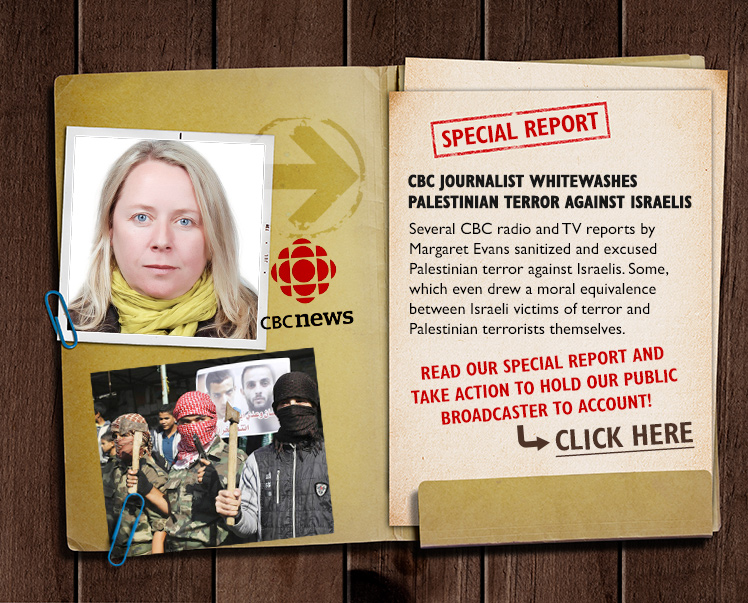 We recently took CBC News to task for its website’s failure to report on the recent Palestinian terror attacks. Though subsequent to our efforts, CBC News.ca did produce coverage of the attacks, it shouldn’t take the work of a media monitoring organization to prompt our public broadcaster to report on these incidents.

Not isolated to the CBC’s website, we have serious concerns with the CBC’s reporting of the recent hostilities by way of the coverage produced by reporter Margaret Evans. A former Mideast Bureau Chief, Ms. Evans, who is now back in Jerusalem, produced several television and radio reports which not only whitewashed and excused Palestinian terror, her journalism deligitimized Israel’s right to self defense, and drew a false moral equivalence between Israeli victims and Palestinian perpetrators of terror and their respective families.

In an October 12 CBC National report, Margaret Evans drew a false moral equivalence between Israeli victims of terror and Palestinian perpetrators of terror and their respective families.

Evans documented the attack on Odelle Bennet, an Israeli who was stabbed 13 times by a Palestinian terrorist and whose husband was murdered in the attack. Evans’ report then faded into coverage of the Palestinian mother and the family of the dead terrorist who are mourning the loss of their son/relative. As Evans describes it “Another woman in mourning” (like Odelle Bennet) and she even refers to “a banner which proclaims his martyrdom.”

Here’s an abridged transcript of this full report which can be viewed online by clicking here or on the image below. 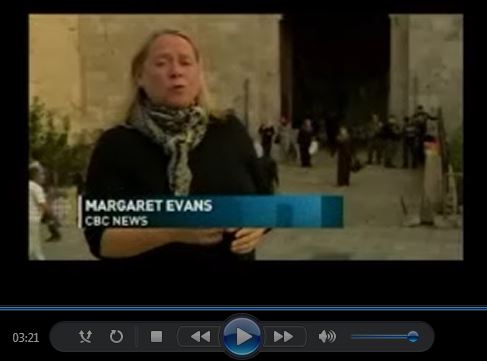 Margaret Evans: “This video was taken right after one of the first knife attacks in the Old City on October 3rd.  >> [screaming] >> … the screams are of a young Jewish mother named Odelle Bennett after she was stabbed 13 times by a young Palestinian as people watched. Today she’s recovering in a Jerusalem hospital and met the woman who stayed with her until help did arrive. Her husband Aaron was killed along with the rabbi who tried to intervene. My children saw everything, she says, it’s very traumatic. I begged for help but no one did. Another woman in mourning. Shareen Badran waits for her 16-year-old’s son’s Izak’s body to come home. He stabbed and injured two Jewish men near the Old City before being killed by Israeli security forces. Outside his life seems as fleeting as the banner that proclaims his martyrdom. The place he grew up has the feel of a lost land. The family has tried to barricade the road, they fear the Israeli army will demolish their house in retaliation. There is great distress amongst Palestinians over the young age of those carrying out a wave of knife attacks and being killed, but Izak’s mother does not accept that his death is futile.”

Interview with Izak’s mother (Palestinian terrorist’s mom): “No, she says, because these children have put fear in the hearts of the Israelis.”

Margaret Evans: “Palestinian fears that Israel is planning to extend Jewish control over the Al-Aqsa Mosque, known as Temple Mount to Jews, is behind much of the unrest. There are near daily clashes between Israeli troops and Palestinian youths throwing stones. a reminder of the first intifada or uprising. What the Israeli government fears it may be facing now. Over the weekend the Israeli Prime Minister Benjamin Netanyahu ordered his government to approve legislation that will impose minimum prison terms of at least four years for Palestinians throwing stones. That’s unlikely to deter an increasingly frustrated Palestinian population now living under an Israeli occupation nearly half a century old. Margaret Evans, CBC News, Jerusalem.”

Here are just some of the images of this report which equivocated Israeli victims of terror and Palestinian perpetrators of terror:

Importantly, there’s only one side which has initiated violence, Palestinian terrorists, and another side which is defending its citizens, Israelis. CBC’s drawing a moral equivalence on this matter was repugnant and beyond the pale. Furthermore, Evans’ report was marred by her referring to the baseless Palestinian allegation claiming “Israel is planning to extend Jewish control over the Al-Aqsa Mosque.” In reality, Israel vehemently denies this allegation and says it’s committed to the status quo arrangement.

On October 12 at 9am EST, CBC Radio carried a Margaret Evans report which stated the following:

CBC Anchor: “Violence continues in Jerusalem’s Old City. An Israeli policeman was stabbed in the latest attack, the assailant was shot dead by police. Five Israelis and two dozen Palestinians have been killed in the upsurge of violence in recent weeks. And as Margaret Evans reports, tensions in the city remain high.”

Margaret Evans: “In Kfar Akab (sp?) a neglected Palestinian neighbourhood in east Jerusalem, a family waits for the return of the body of their sixteen-year-old son. He was killed by Israeli security forces on the weekend after he tried to stab 2 Jewish men by the Old City’s Damascus Gate. “They shot him four times” says Shirin Badran of her son Izak’s final moments and still they were afraid of him even as he was lying on the ground. There’s a lot of fear in their hearts for these children, she says, of the young Palestinians launching their knife attacks. The fear on both sides is that the violence of these past two weeks is now building in an irreversible momentum. Izak’s mother says she’d sacrifice another child if it meant an end to the Israeli occupation. Margaret Evans, CBC News, Jerusalem.”

Untold by the CBC, is that 11 of the two dozen dead Palestinians were terrorists themselves who were killed after carrying out their attacks. The remainder of the dead are Palestinian demonstrators/rioters and civilians who were accidentally killed in conflict with Israeli forces. Failing to mention this misled CBC viewers into thinking that these Palestinians were all innocents.

More troublesome was that Margaret Evans’ report drew sympathy to the fate of the dead Palestinian terrorist and his family who are mourning him. CBC listeners were told that Israel acted disproportionately: “they shot him four times” according to the mother of the 16-year-old Palestinian terrorist. The mother then presented her son as a so-called martyr for the Palestinian cause of ending the “Israeli occupation”. At no time did Evans attempt to explain the terror and grief currently existing in Israeli society who are under the brunt of this wave of relentless Palestinian terror.

Throwing Stones is an Act of Violence, not Protest:

Reporting from near Ramallah on October 9, Margaret Evans opened her 5:13pm EST radio report by stating: “In the west bank, the anger is starting to burn bright again. The stone throwers using sling shots to hurl their frustrations at Israeli occupiers. Young Palestinians driven or drawn to the edge again and again of the fault lines that are Israeli checkpoints, this one between the Palestinian city of Ramallah and the Israeli settlement of Beit El.” 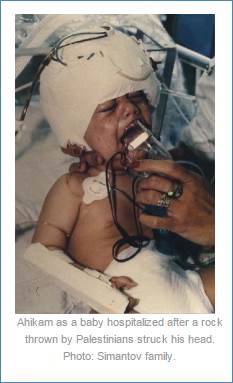 Evans’ characterization that sling shots “hurl their (Palestinian) frustrations at Israeli occupiers” is highly objectionable. Such statements, simple put, whitewash violence and terror directed against Israelis. A slingshot is a weapon, plain and simple, and its use by Palestinians (irrespective of if they are “drawn to the edge”) has seen innocent Israelis maimed and murdered. Palestinian “anger” in the face of what Evans describes as “Israeli occupiers” could have been vented through legitimate political protest using non-violent means, but instead, when these Palestinians use weapons to advance their interests, they are not simply hurling their frustrations, they are launching deadly weapons and their goals are to inflict harm, to kill, and to intimidate Israelis.

For reference purposes, here’s an image of an Israeli baby hospitalized when a rock was thrown at a vehicle she was in.

Furthermore, Israeli checkpoints are not just mere “fault lines”, instead they are a necessary security measure to protect Israelis. Just days ago, at a checkpoint near Maale Adumim, a Palestinian woman who was pulled over for driving suspiciously, detonated an explosive device. Had this checkpoint not been there, this Palestinian terrorist could have caused massive damage and murdered many innocents.

Delegitimizing Israel’s Right to Self Defense:

In an on-the-street report on CBC TV on October 13, Margaret Evans’ report implied that Israeli forces were “heavy-handed” in dealing with Palestinian terrorists:

Margaret Evans: “Most of the attacks have been carried out by young Palestinians, teenagers as young as 13-years-old. Some analysts are actually calling it the “Intifada of the young people” that means, uprising. There are a lot of people who fear that another a 3rd intifada is on its way. That’s because of the youth of these people, they’re coming out with knives, there’s a lot of unhappiness amongst Palestinians over the way in which the Israeli government or Israeli security forces have responded, they say that they shouldn‘t be so heavy-handed in some of these attacks, that they should be able to disarm the knife-wielding attackers, rather than to just shoot them down. So that’s causing a lot of unrest in the west bank as well…”

To watch this report please click here or on the image below. 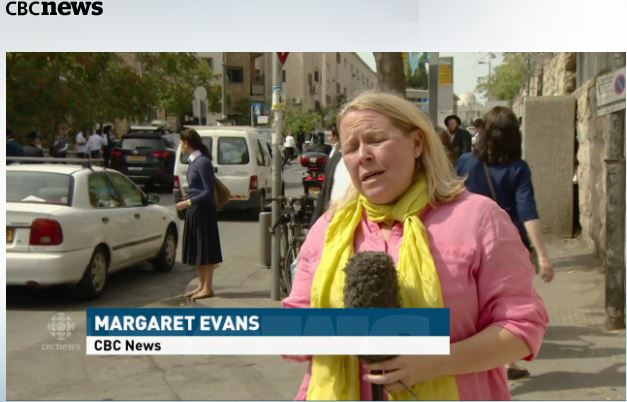 In an effort to deligitimize Israel’s right to self defense, once again, Israel is accused of a disproportionate response. Irrespective of if this statement was featured via indirect attribution, I.E. Palestinians say “they shouldn‘t be so heavy-handed in some of these attacks,” the inclusion of this narrative into this report is unwarranted.

As HonestReporting.com put it recently, that fewer Israelis have died in Palestinian attacks is due to quick Israeli responses at the scene, along with first rate medical expertise and no amount of sheer luck. Let’s be under no illusions – Palestinian attackers intend to murder. Yet, Margaret Evans filed a story pushing the line that Israelis have reacted disproportionately by using lethal force against Palestinians carrying out terror attacks.

Israel’s primary concern at this time is unsurprisingly to protect its own citizens and not the terrorists. Would CBC feature coverage of the terror attacks on Parliament Hill asking if Kevin Vickers was heavy-handed in neutralizing that terror attack on our nation’s capital? We think not.

Please refer to these TV and Radio reports produced by reporter Margaret Evans in recent days which not only whitewashed and excused Palestinian terror, her journalism deligitimized Israel’s right to self defense, and drew a false moral equivalence between Israeli victims of terror and Palestinian perpetrators of terror and their respective families.