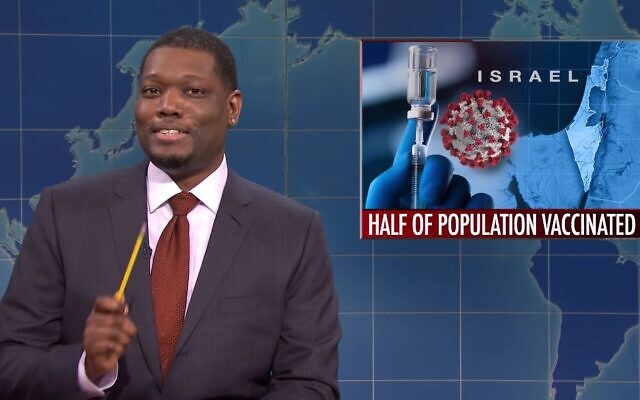 Anti-Israel misinformation has become so mainstream, that it now comes from the strangest of sources.

On February 20, the popular late night television comedy Saturday Night Live featured a “Weekend Update” mock news story, where the host veered into serious anti-Israel and antisemitic territory. In the segment, host Michael Che reported that Israel was leading the world in injecting Covid 19 vaccines, with most Israelis now inoculated. “Israel is reporting that they’ve vaccinated half of their population,” Che said, “and I’m gonna guess it’s the Jewish half,” he deadpanned.

Since virtually the moment Che said those words, critics have fumed at the nature of his comments. And although defenders of Saturday Night Live’s segment, including an editorial in the Jerusalem Post newspaper, have said the program is comedy, and not necessarily to be taken so seriously, that has not assuaged critics.

“Just to let you know that anti-Semitism is not funny, it is dangerous, and also a lie,” tweeted Israel’s Health Minister Yuli Edelstein, adding: “By the way, in Israel, all residents regardless of religion and ethnicity have equal access to vaccines, and Israeli-Arabs enjoy one of the highest vaccination rates in the world.”

So how offensive is the Saturday Night Live segment, and why is it so significant?

In truth, the biggest problem with the joke is less about the specific context in which it was said, and more about what it signifies. Anti-Israel misinformation about Israel hoarding vaccines and refusing to vaccinate the population living under the Palestinian Authority, for example, has been reported in news media outlets around the world, including in Canada.

And although these news stories rely on factually incorrect information, and ignores the critical fact that Israel bears no legal or moral obligation to vaccinate the Palestinian population, that has not stopped this falsehood from spreading far and wide.

But this misconception is perhaps tied to another, more insidious belief about the Jewish people in general: their alleged selfish nature.

For example, in last year’s survey of antisemitic attitudes towards Jews in the United States, the Anti-Defamation League (ADL) found that one in four respondents harboured views that suggested Jews were more loyal to Israel than their own communities. While that belief does represent a minority view, it is nonetheless significant enough to reflect a common attitude many people hold towards Jews.

One of the biggest dangers of anti-Israel and antisemitic messages becoming normalized in the news media and comedy, is that it can often be so entrenched in society that pushing back is nearly impossible. 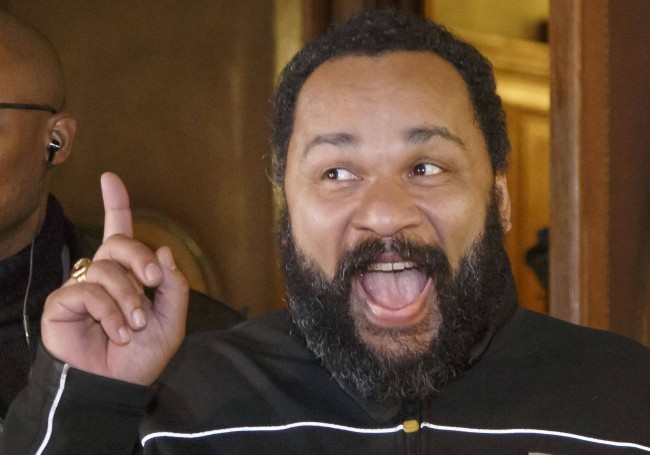 One example is a powerful lesson that comedy can piggyback off normalized antisemitism, and then become a force for hatred in its own right. In France, actor and comedian Dieudonné M’bala M’bala (pictured right) first publicly entered the world of anti-Israel and antisemitic messaging when in 2003, he performed a skit where he portrayed Israeli soldiers as Nazis. Since then, he created the quenelle gesture, an inverted Nazi salute, with clear antisemitic undertones. And while it is true that he was eventually charged in French courts on antisemitism charges, it was not before his antisemitic slander was broadcast to millions of listeners and viewers around the globe.

Another concern about problematic comedy show programming is that for many people, that is their source of news and information. In 2000, the Pew Research Center for the People and the Press found that only nine per cent of those aged 18 to 29 listed the comedy programs The Daily Show and Saturday Night Live as sources for their news. Four years later, that number had more than doubled to 21 per cent. Clearly, then, these comedy programs aren’t just a reflection of the news; for a rapidly growing number of young people, these comedy programs have become a source of news.

And therein lies the dangerous nature of the situation, and what last week’s Saturday Night Live sketch has shown.

When anti-Israel – and often times antisemitic – messaging and misinformation becomes normalized, or at the very least common enough in the news media, it is only inevitable that it seeps its way in to comedy programming, as well, which then amplifies it and regurgitates it to an even wider, more diverse and typically younger audience. As such, it is axiomatic that in order to combat anti-Israel and antisemitic messages in comedy, it needs to be rooted out and addressed in the mainstream news media context where it often finds a fertile foothold.