Today, the Globe and Mail issued the following correction on page A2 subsequent to receiving our complaint, our letter to editor, and scores of letters that were sent by HonestReporting Canada subscribers: 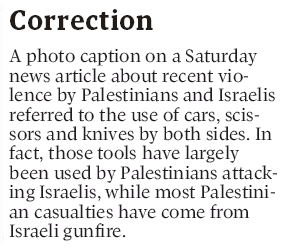 It goes without saying that this correction is not satisfactory by any means and does not remedy the Globe’s falsely claiming that Israeli civilians committed terror on Palestinians using cars, scissors, and knives. Firstly, to recall the Globe’s original claim, they contended that Israeli civilians used cars, scissors and knives to “inflict harm” on Palestinians. While the Globe claims that Palestinians have “largely” used these weapons which this correction whitewashes as mere “tools”, they should have said “exclusively”. The Globe also elected to take a disgraceful and misleading shot at Israel by saying that “Most Palestinian casualties have come from Israeli gunfire.” In truth, Israel contends that the majority of these Palestinian casualties were killed while carrying out terror attacks and Israelis acted in self defense. The remainder of the Palestinian casualties were killed in violent riots initiated by Palestinians during hostilities with Israel’s Defence Forces. The Globe omitted making mention of this fact and context.

The Globe has yet to comment on the other shortcomings in this article that we pointed out, specifically its implied claims that Palestinian terrorists are mere “vigilantes” and reporter Patrick Martin’s audacious claim that “It is also hard to justify the violence meted out by Israelis who increasingly take the law into their own hands.” Public Editor Sylvia Stead has emailed complainants offering an apology of sorts on behalf of the Globe: “The error in the photo caption has been corrected. (Please see page A2 where all corrections are published). Just so you know, photo captions and headlines are not written by the reporter in question. We are sorry that mistakes happen, but we correct them in a timely manner.”

Of importance, the Globe and Mail has been named and shamed for having committed these serious journalistic transgressions.

Canada’s so-called paper of record, the Globe and Mail, produced reporting on November 28 which outrageously claimed that Israeli civilians have committed terror on Palestinians by using “cars, scissors and knives to inflict injury.”

This claim was made in a photo caption to a prominently placed Patrick Martin report entitled “Vigilante violence grips Israelis, Palestinians”.

The photo caption (see immediately below) shockingly claimed: “… It is one of the many attacks in which civilians on both sides have used cars, scissors and knives to inflict injury“.There is no foundation to the Globe and Mail’s claim that Israeli civilians have carried out terror attacks on Palestinians using “cars, scissors and knives to inflict injury”. In sharp contrast, dozens of Palestinian terrorists have shot, stabbed and have intentionally run over Israelis with their cars killing 19 Israelis and an American citizen and wounded hundreds. 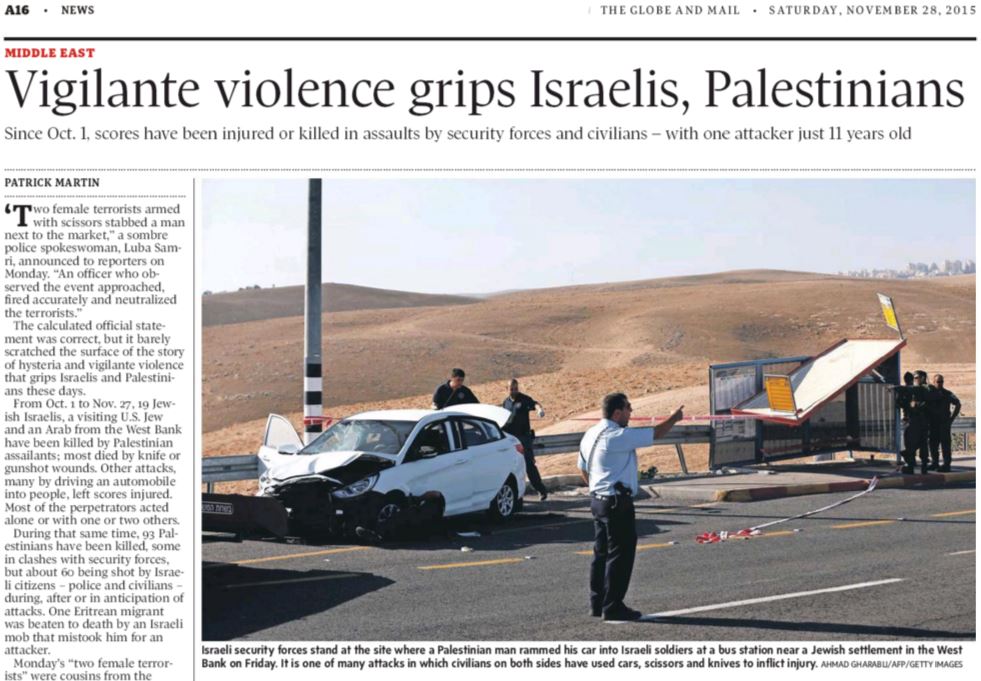 Faced with this unrelenting wave of Palestinian terror, Israel is exercising the utmost restraint and is taking all security precautions to safeguard its people, Jews and Arabs alike. And yet, Globe reporter Patrick Martin has the audacity to deny Israelis their right to self defense by claiming that “It is also hard to justify the violence meted out by Israelis who increasingly take the law into their own hands.” Martin then contradicted himself by reporting that “… Mr. Netanyahu called on Israelis who are licensed to own weapons to take them into the street and to be prepared to use them to defend themselves. ‘The responsible civilian population – in the framework of the rule of law – has a part to play’ in defence, the Prime Minister’s spokesman said.” In other words, Israelis are not allowed to take the law into their own hands, they are expressly forbidden from doing so and they must act in strict adherence to the rule of law.

Make no mistake, there’s no moral equivalence between Israelis who are under the brunt of daily terror attacks and Palestinians who are incited into carrying out premeditated violence against innocents. These Palestinians – despite the Globe’s implied claims that they are vigilantes – are bona fide terrorists.

HonestReporting Canada has already filed a complaint with the Globe and Mail and has called on this publication to issue a formal retraction for its falsely claiming that Israeli civilians have committed terror on Palestinians using cars, scissors, and knives. To maximize impact, we need you to file a complaint now with the Globe’s Public Editor, Sylvia Stead, sstead@globeandmail.com and call on the Globe to retract this malicious allegation.