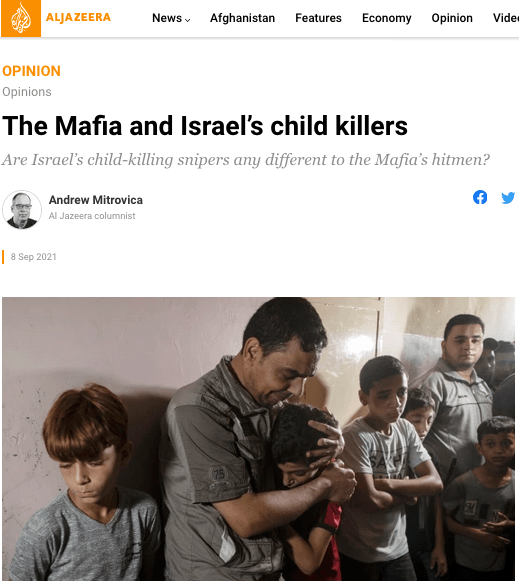 There’s an important line separating legitimate opinion that enhances the public discourse, from inflammatory rhetoric that interferes with constructive dialogue.

In our view, it’s alarming to see a Sheridan College Professor write a baseless and hateful column against Israel entitled: “The Mafia and Israel’s child killers,” which paints a grotesque and false caricature of Israel’s armed forces.

In his screed, Andrew Mitrovica, a journalism instructor in the Faculty of Animation, Arts & Design, describes the recent death of a 12-year-old Palestinian boy, and bizarrely compares the Israel Defense Forces (IDF) to the mafia, or as he describes it, a “ruthless crew of gangsters masquerading as ‘soldiers’ who populate the Israeli military.” In his eyes, the IDF is an organized crime syndicate and its soldiers, criminals. As he put it “Israel’s child-killing snipers” are no different than mafia-hitmen.

While Mitrovica attempts to portray the death of the preteen as a premeditated act of a murderous army, he conveniently omits a critical detail: that the boy was killed during violent clashes on the border between Hamas-controlled Gaza and Israel, where rioters threw explosives and attempted to breach the barrier to gain entry into Israel. Because if that detail was mentioned, readers would understand that there is a chasm of difference between a premeditated act of murder, and a casualty of war. Even more so, the fact that a 12-year-old boy was on the front lines of a violent riot on the border with Israel begs the question as to whether the boy was recruited into conflict by Hamas terrorists, as it has done with other child soldiers in the past.

Mitrovica feebly attempts to compare the Israel Defense Forces to the mafia, claiming both groups target children indiscriminately. While such nonsense may be fit to be published on Al Jazeera, it is demonstratbly false. Israel faces nonstop terror threats to the lives and safety of its civilians, who were bombarded by more than 4,000 Hamas rockets this past spring. Israel acts in an extraordinarily restrained and targeted manner when faced with such violent, hateful terrorism, whether coming from Hamas, Hezbollah, Islamic Jihad or other groups. One cannot envision any other country who would tolerate nonstop terrorism, calls for its destruction, rockets fired indiscriminately at its civilian population centres, all emanating from the never-ending incitement of hate peddled by Hamas, the genocidal, homophobic and medieval Islamist death cult which rules Gaza with an iron fist.

While factual omissions like this are reason enough to dismiss Mitrovica’s column, that is the least of the problems. While reasonable voices can disagree on policies or the actions of the Israeli military, in our opinion, he goes far beyond that line. The bigger issue is that, throughout his oped, Mitrovica repeatedly dehumanizes all Israelis who serve in their country’s armed forces – which, with some exceptions, applies to the vast majority of Israeli Jews who turn 18-years-old.

Mitrovica refers to Israel’s armed forces as a “diseased, irredeemable army” and said the Israeli soldiers who strove to protect their border with Gaza against a violent riot of attempted armed infiltrators have “forfeited the privilege of being called a human being.”

But Mitrovica is doing more than spreading factual errors; in our opinion, he is peddling the very fiery hate that he is accusing Israel of perpetrating. As the famous adage goes, “when you point a finger at someone else, you have four pointing back at you.”

Even beyond the misinformation speckled throughout his column, Mitrovica, in our view, is adding to the ongoing feeding frenzy of hate against Israel and its Jewish population. He is attempting to strip the humanity of the vast majority of Jews in Israel, who have served in the military, are currently serving in the military, or who will one day serve in their country’s military.

Importantly, the IHRA Definition of antisemitism holds that: by “making mendacious, dehumanizing, demonizing, or stereotypical allegations about Jews…” is antisemitic or in layman’s terms: Jew hatred.

History has shown with tragic regularity what happens when propagandists attempt to dehumanize “the other” and portray them as subhuman. The Nazis did it to Europe’s Jewish population more than 80 years ago, and more recently, Serbia’s government dehumanized ethnic Albanians, and in Rwanda, the minority Tutsis were dehumanized widely. In all these cases, dehumanization predated a genocide.

Andrew Mitrovica is doing more than spreading misinformation against Israel; he is portraying millions of Israeli Jews as less than human. History has shown the high price paid when that kind of language is used.

In our view, Sheridan College, and indeed Ontario taxpayers in general, should be outraged that a lecturer teaching young, impressionable minds, is spreading this kind of hate propaganda.