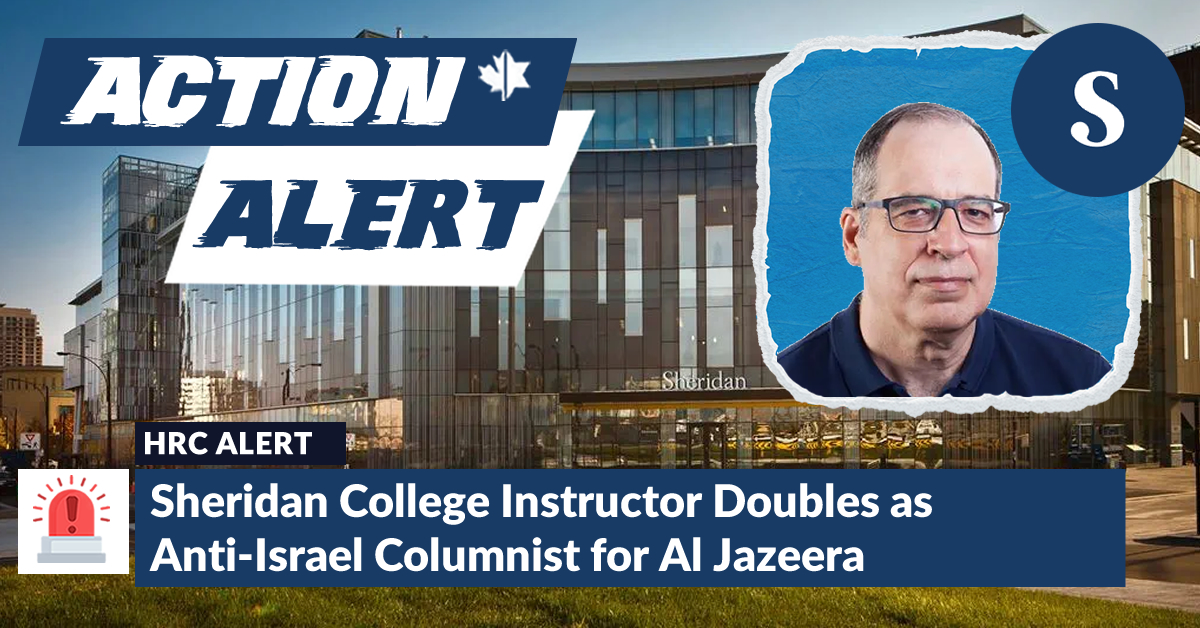 But perhaps one of the most pernicious elements of this campaign foisted on post-secondary campuses has been the involvement of professors and lecturers in disseminating anti-Israel disinformation from their positions of influence, both in the classroom and in the news media.

In this category, Andrew Mitrovica has been a very prominent player.

Mitrovica, a journalism instructor at Oakville’s Sheridan College, also serves as a columnist for Al Jazeera, where he has written more than half a dozen columns lambasting Israel in the last six months alone. While Mitrovica is certainly entitled to his own opinions, his columns have veered far outside of legitimate disagreement with Israeli policy and into blatant anti-Israel disinformation.

In a June 19 column entitled: “Gaza’s children are suffering: Trudeau’s shame is Canada’s shame,” Mitrovica refers to Gazans as “victims of incessant Israeli perversions,” claiming that “Israel murdered and maimed many Palestinians” in 2018, and refers to the 2021 Hamas-Israel war as “an 11-day Israeli turkey shoot.”

Mitrovica ignores the actions of Hamas, the terrorist group in charge of Gaza, including its firing of more than four thousand rockets into Israel in May 2021, its widespread usage of its own people as human shields against Israel and its abuse of young Palestinians as child soldiers in its terror war against Israel. He also falsely gives the impression that Israel purposefully targets Palestinians in Gaza, rather than take extreme precautions to avoid civilian casualties, including sending warning leaflets, making calls and sending text messages in advance of attacks on terror targets in civilian neighbourhoods.

In a July 22 column entitled: “Shireen Abu Akleh’s killing: Lies, investigations and videotape,” Mitrovica made unsubstantiated claims about the death of Shireen Abu Akleh, a Palestinian journalist for Al Jazeera, who died when she was hit by a bullet in the Palestinian city of Jenin while covering fighting between Israeli soldiers and Palestinian terrorists.

In the column, Mitrovica groundlessly refers to Abu Akleh’s death as a “murder” and that she was “assassinated” by Israel.

Importantly, the conclusions drawn from a ballistics test of the bullet were inconclusive, and even if an Israeli soldier fired the bullet, there is zero evidence that it was done with any intention whatsoever.

Mitrovica’s parroting of unsubstantiated disinformation on Al Jazeera is distressing under any circumstances, but even more so coming from an instructor teaching journalism.

Mitrovica has also creatively and forcibly shoehorned Israel into current events, writing in an April 19 column entitled: “President Zelenskyy, one Israel is enough,” that Ukrainian President Volodymyr Zelenskyy should not cozy up to Israel and stand “with the oppressor, rather than the oppressed.”

Offering commentary on Israel, even half-baked and misinformed, is the right of a columnist, but to forcibly import Israel into a column ostensibly about the Russo-Ukrainian war demonstrates quite simply an obsession with Israel, no matter what is happening elsewhere in the world.

Unfortunately, peddling anti-Israel propaganda is hardly a new activity for Mitrovica. In September 2021, in his column entitled: “The Mafia and Israel’s child killers,” Mitrovica compared members of Israel’s Defence Forces (IDF) to  the mob, describing Israeli soldiers to a “ruthless crew of gangsters masquerading as ‘soldiers’ who populate the Israeli military.”

He also referred to Israel’s military as a “diseased, irredeemable army” and that an Israeli soldier who tried to protect his country’s border from infiltrators from Gaza “forfeited the privilege of being called a human being.”

These poisonous words were condemned as a blood libel and they went beyond the scope of reasonable disagreement, and veered into the category of objectionable language, as, in our view, he engaged in hate by dehumanizing Israelis who serve(d) in the Israel Defense Forces (IDF).

Mitrovica’s incessant and baseless attacks against Israel in his capacity as a columnist for Al Jazeera is repugnant enough, but all the more so given his role teaching journalism at an Ontario post-secondary institution, particularly for impressionable young adults.

Sheridan College, as a publicly funded institution, must take responsibility for the actions taken by a member of its faculty, and must condemn publicly and powerfully, Mitrovica’s anti-Israel diatribes, as well as take the appropriate remedial action to make their displeasure known.

Take Action Now: Andrew Mitrovica has accused Israel of assassinating a Palestinian journalist, of purposefully murdering Palestinians, and even compared Israeli soldiers to members of the mafia and has engaged in Jew hatred by dehumanizing the Jewish people of Israel collectively.