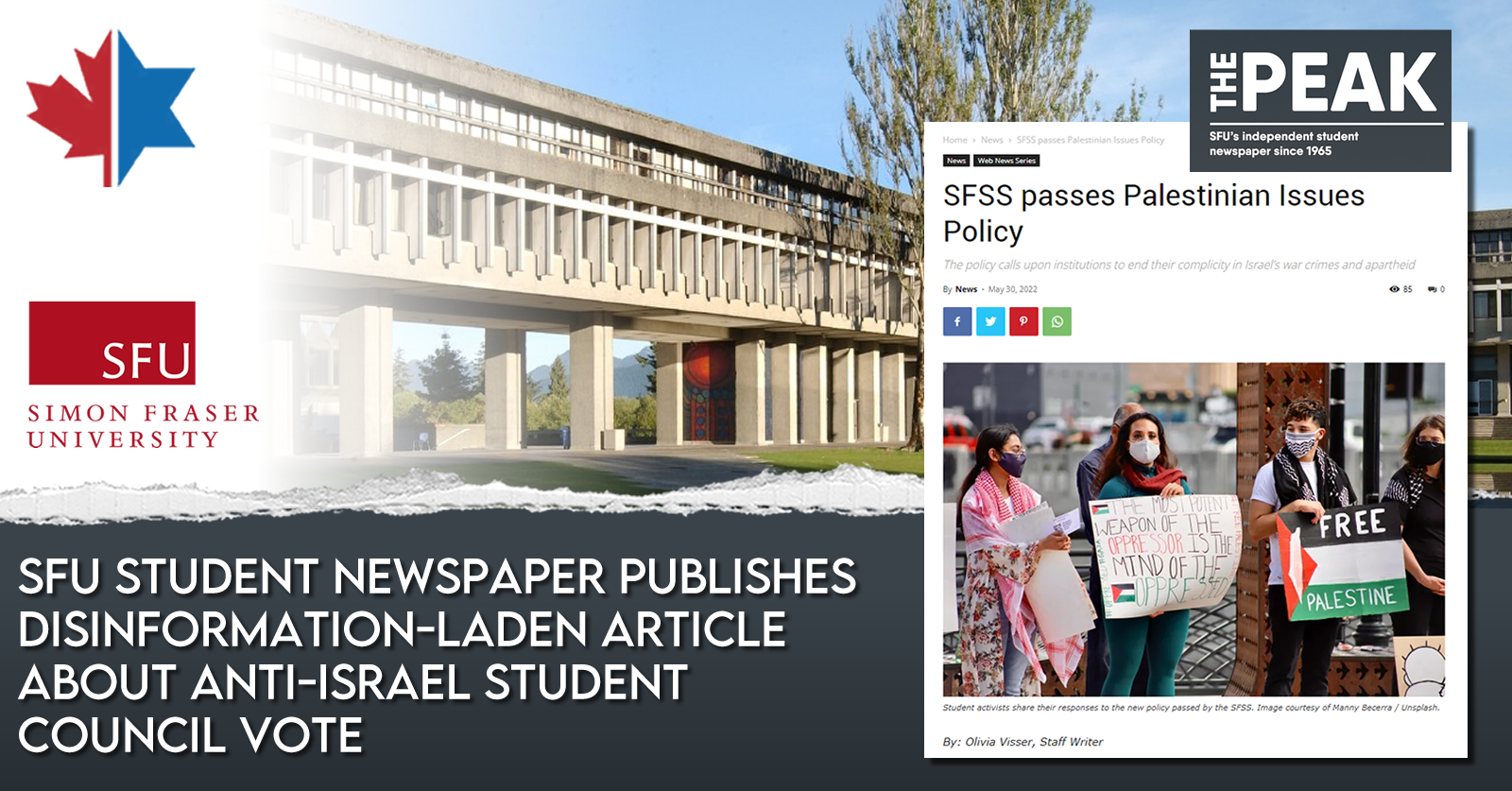 Regrettably, the article was filled with misinformation, ranging from referencing “the war crimes carried out against Palestine by the state of Israel” and “the Israeli occupation of Palestine,” among others.

The claims of alleged Israeli war crimes against Palestinians, while frequently made, simply do not hold up to even the basic levels of scrutiny.

As for the oft-repeated claims of occupation, it is no more factually accurate, either. Israel is in possession of full legal title to the land of Israel according to international law, in part because the land in question was not the sovereign territory of another state and was acquired in a war of self-defense.

Visser refers to “Israeli settler-colonial practices” and quotes two pro-Palestinian student activists, Parsa Alirezaei and Tuleen Awad, who allege that Palestinian students are “constantly met with collective punishment and incarceration,” ostensibly for their support for the Palestinian cause.

This is a truly eyebrow-raising allegation being made by these students, and being repeated by The Peak, with no evidence whatsoever being marshaled in support of these claims.

Israel is a country governed by the rule of law, and any Palestinians arrested by Israel and who are detained or convicted are incarcerated because they pose a very real threat to the safety of Israelis. Unlike the Palestinian leadership under both Hamas and the Palestinian Authority, Israel does not arrest individuals for their political views.

The claim of “settler-colonial practices” on Israel’s part may make for good talking points, but they are utterly vapid. Israel is the manifestation of two millennia of Jewish yearning for an independent homeland in the Jewish people’s ancestral territory, and today Israel – the world’s only Jewish State – possesses the same land as its ancient forefathers from thousands of years ago.

In fact, Israel represents the polar opposite of a settler-colonial state, but rather an indigenous people, though suffering through exile and persecution, reclaiming their ancient heritage, language, and land.

Visser quotes two student activists who claim that the “Israel lobby” conducts smear campaigns against “Canadian institutions, students, staff and faculty.” But rather than promoting a position of dialogue, understanding, and compromise, the two students called for Simon Fraser University to “cut off all ties with Israeli institutions.”

This is an exercise in self-contradiction. These anti-Israel student activists at Simon Fraser University, being given a fawning platform by The Peak, rail against alleged injustice and collective punishment, but nevertheless, promote collective punishment by wanting Simon Fraser University to hold all Israeli institutions to be held accountable for the actions of the Israeli government.

The disinformation and calls for collective punishment against Israeli institutions in the news article are problematic enough, but at the end of the report, Visser quotes one student, Rea Chatterjee, the Vice-President of Equity and Sustainability for the SFSS, as calling for students to become involved with a group called Samidoun to help promote the Palestinian cause.

Samidoun, which bills itself as a “Palestinian prisoner solidarity network,” is, in reality, an organization with close ties to the Palestinian Front for the Liberation of Palestine (PFLP), a recognized terror entity under Canadian law. Shamefully, this critical fact goes entirely unreported by The Peak.

If the student union at Simon Fraser University wants to pass an anti-Israel motion, based in emotion and not fact, it is a slap in the face against thousands of tuition-paying students who did not sign up for their institution’s student body to be represented in such a regressive way.

But equally problematic is the university’s independent student newspaper giving heavily unbalanced coverage to this shameful vote, providing no context or corrections to the anti-Israel claims, and interviewing no dissenting voices.

Tens of thousands of students at SFU are being held hostage by the whims of an agenda-driven student council and a student newspaper that is failing to fulfill its basic obligations as a publication.