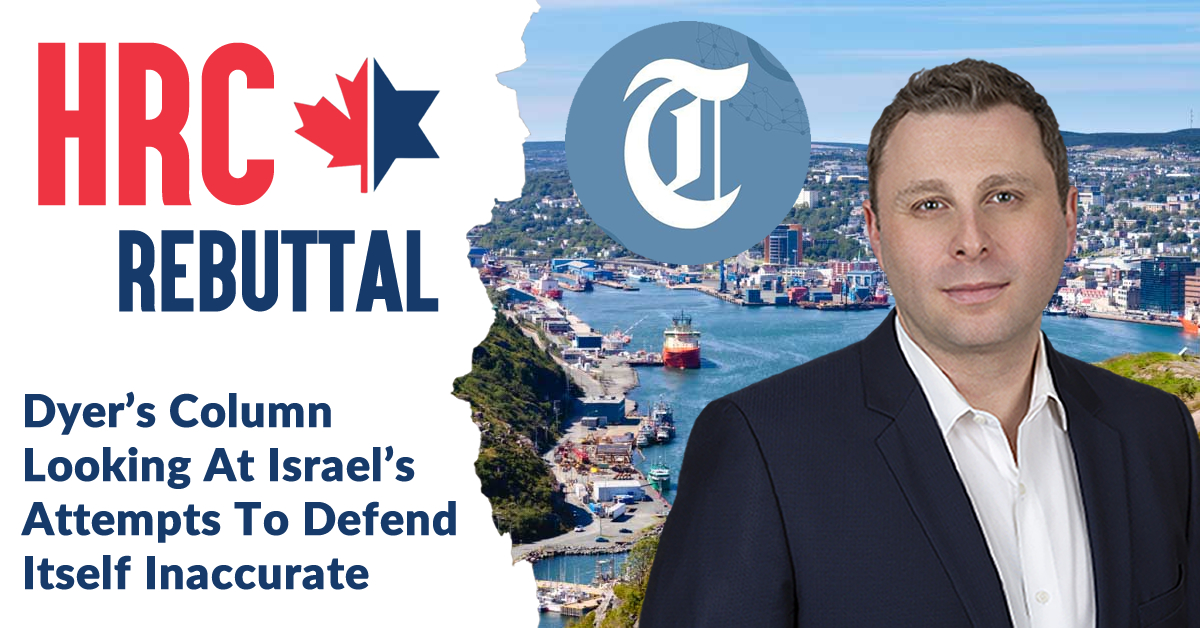 On August 27, The Telegram published HRC’s rebuttal to columnist Gwynne Dyer’s column which claimed without foundation that Israel escalated its recent conflict with Islamic Jihad purposefully to invite a confrontation with Iran. 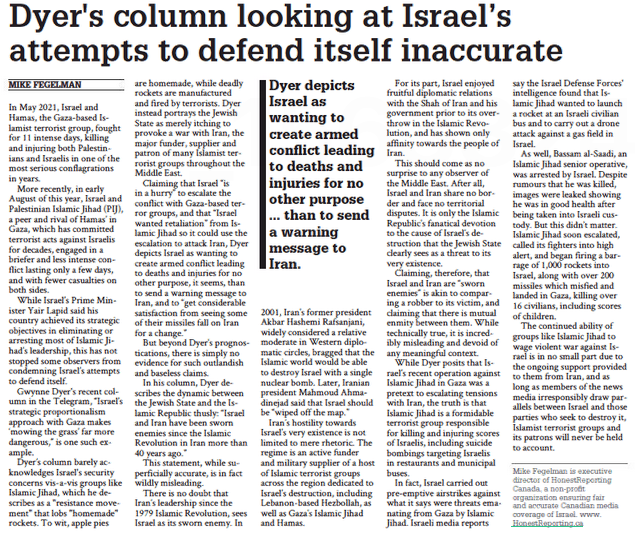 In May, 2021, Israel and Hamas, the Gaza-based Islamist terrorist group, fought for 11 intense days, killing and injuring both Palestinians and Israelis, in one of the most serious conflagrations in years.

More recently, in early August of this year, Israel and Palestinian Islamic Jihad (PIJ), a peer and rival of Hamas’ in Gaza which has committed terrorist acts against Israelis for decades, engaged in a briefer and less intense conflict lasting only a few days, and with fewer casualties on both sides.

While Israel’s Prime Minister, Yair Lapid, said his country achieved its strategic objectives in eliminating or arresting most of Islamic Jihad’s leadership, this has not stopped some observers from condemning Israel’s attempts to defend itself. 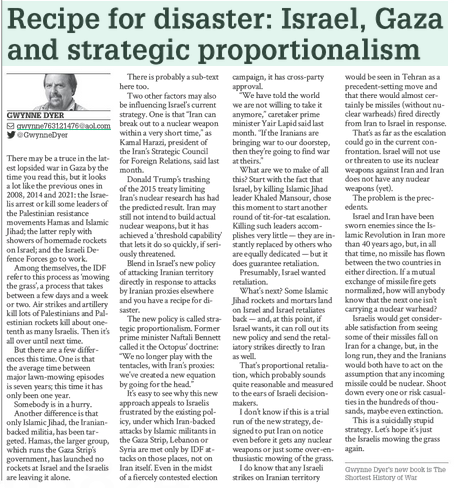 Dyer’s column barely acknowledges Israel’s security concerns vis-a-vis groups like Islamic Jihad, which he describes as a “resistance movement” that lobs “homemade” rockets. To wit, apple pies are homemade, while deadly rockets are manufactured and fired by terrorists. Dyer instead portrays the Jewish State as merely itching to provoke a war with Iran, the major funder, supplier and patron of many Islamist terrorist groups throughout the Middle East.

Claiming that Israel “is in a hurry” to escalate the conflict with Gaza-based terror groups, and that “Israel wanted retaliation” from Islamic Jihad so it could use the escalation to attack Iran, Dyer depicts Israel as wanting to create armed conflict leading to deaths and injuries for no other purpose, it seems, than to send a warning message to Iran, and to “get considerable satisfaction from seeing some of their missiles fall on Iran for a change.”

But beyond Dyer’s prognostications, there is simply no evidence for such outlandish and baseless claims.

In his column, Dyer describes the dynamic between the Jewish State and the Islamic Republic thusly: “Israel and Iran have been sworn enemies since the Islamic Revolution in Iran more than 40 years ago.” This statement, while superficially accurate, is in fact wildly misleading.

There is no doubt that Iran’s leadership since the 1979 Islamic Revolution, sees Israel as its sworn enemy. In 2001, Iran’s former president Akbar Hashemi Rafsanjani, widely considered a relative moderate in Western diplomatic circles, bragged that the Islamic world would be able to destroy Israel with a single nuclear bomb. Later, Iranian president Mahmoud Ahmadinejad said that Israel should be “wiped off the map.”

Iran’s hostility towards Israel’s very existence is not limited to mere rhetoric. The regime is an active funder and military supplier of a host of Islamic terrorist groups across the region dedicated to Israel’s destruction, including Lebanon-based Hezbollah, as well as Gaza’s Islamic Jihad and Hamas.

For its part, Israel enjoyed fruitful diplomatic relations with the Shah of Iran and his government prior to its overthrow in the Islamic Revolution, and has shown only affinity towards the people of Iran.

This should come as no surprise to any observer of the Middle East. After all, Israel and Iran share no border and face no territorial disputes. It is only the Islamic Republic’s fanatical devotion to the cause of Israel’s destruction that the Jewish State clearly sees as a threat to its very existence.

Claiming, therefore, that Israel and Iran are “sworn enemies” is akin to comparing a robber to its victim, and claiming that there is mutual enmity between them. While technically true, it is incredibly misleading and devoid of any meaningful context.

While Dyer posits that Israel’s recent operation against Islamic Jihad in Gaza was a pretext to escalating tensions with Iran, the truth is that Islamic Jihad is a formidable terrorist group responsible for killing and injuring scores of Israelis, including suicide bombings targeting Israelis in restaurants and municipal buses.

In fact, Israel carried out pre-emptive airstrikes against what it says were threats emanating from Gaza by Islamic Jihad. Israeli media reports say the Israel Defense Forces’ intelligence found that Islamic Jihad wanted to launch a rocket at an Israeli civilian bus and to carry out a drone attack against a gas field in Israel.  As well, Bassam al-Saadi, an Islamic Jihad senior operative, was arrested by Israel. Despite rumours that he was killed, images were leaked showing he was in good health after being taken into Israeli custody. But this didn’t matter. Islamic Jihad soon escalated, called its fighters into high alert, and began firing a barrage of 1,000 rockets into Israel, along with over 200 missiles which misfired and landed in Gaza, killing over 16 civilians, including scores of children.

The continued ability of groups like Islamic Jihad to wage violent war against Israel is in no small part due to the ongoing support provided to them from Iran, and as long as members of the news media irresponsibly draw parallels between Israel and those parties who seek to destroy it, Islamist terrorist groups and its patrons will never be held to account.

Take Action: Contrary to Gwynne Dyer’s reckless claim, there’s no proof to support his allegation that Israel intentionally escalated recent hostilities with Islamic Jihad to send a message to Iran, in the hopes of spurring on a larger war with the Islamic Republic. Send letters to The Telegram at: letters@thetelegram.com.