By HonestReporting Canada May 9, 2022 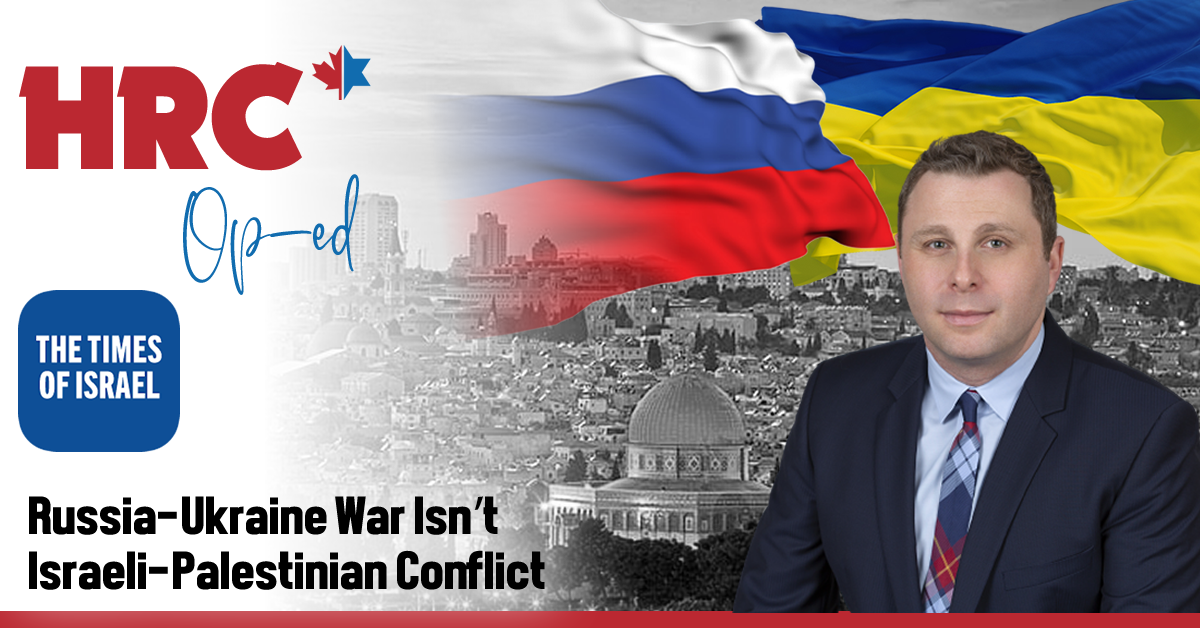 This Op-ed was published in The Times of Israel on Monday, May 9, 2022
Source: Russia-Ukraine War Isn’t Israeli-Palestinian Conflict


Ever since February 20, when Russian forces began their invasion of Ukraine, the world’s attention has been focused on Eastern Europe and the humanitarian disaster unfolding as a result of the war.

Individuals, organizations, and states around the world have stepped up their humanitarian aid, including accepting Ukrainian refugees and providing assistance to those fleeing the fighting.

Here in Canada, the last two and a half months have been characterized by more than these altruistic offers of support for those impacted by the horrors of war. There has also been a dark undercurrent of personal political agendas being shoehorned into the war in Ukraine in an attempt to further completely separate causes.

One of the most notable examples is how pro-Palestinian activists have repeatedly used news from Eastern Europe in an attempt to draw a false parallel between the Russian invasion of Ukraine, and the conflict between Israelis and Palestinians in the Middle East.

For example, in a first-person CBC column published in early April entitled “Palestinian Winnipegger grateful for world’s response to Ukraine, though it’s been painful to witness,” Idris Elbakri, a Palestinian living in Winnipeg, attempted to compare Russia’s invasion of Ukraine to Israel’s relations with the Palestinians.

On February 25, the CTV talk show, The Social, featured a guest commentator named Ivory, who used the war in Ukraine to share anti-Israel comments, suggesting that Palestinians have been “bombed and invaded for years.”

In a March 5 column in British Columbia’s The Georgia Straight newspaper, columnist Gurpreet Singh took the British Columbia government’s pulling of Russian alcohol from provincial shelves as an opportunity to repeat anti-Israel talking points, and demand the provincial government do the same with liquors from the Jewish state.

There are two major problems with those who have attempted to draw a parallel between Ukraine and the Palestinians.

First, the analogies are extraordinarily problematic. In Ukraine, a sovereign state was invaded by a separate sovereign state, Russia. Contrast this with Israel, where despite claims frequently made by anti-Israel activists to the contrary, the Jewish state is neither an illegal occupier nor an invader of Palestinian land. Backed by significant international law, as well as three thousand years of Jewish inhabitation in the area, Israel’s presence in Judea & Samaria (sometimes called the “West Bank”) is entirely legitimate.

In 1948, after Israel announced its independence from the United Kingdom, it was almost immediately invaded by its Arab neighbours, and although the nascent Jewish State survived, it once again faced attacks and attempted invasions in 1967 and 1973. And for virtually all of the last 50 years, Israel has endured terrorism in multiple forms from anti-Israel Arab extremists, who have sought to murder innocent Israelis and destroy the Jewish state. In recent weeks, 18 innocent people in Israel were murdered in a spate of Palestinian-Arab terrorist attacks.

It should be clear, then, to any observer that the Russian invasion of Ukraine bears no resemblance to Israel’s struggle to survive against incessant hostile forces for more than 70 years. Israel has the legal, moral and historical right to its land, as well as the right to defend it against violent attacks, as it has done since 1948.

The second problem with the repeated attempts to drag the anti-Israel cause into the war in Ukraine is unrelated to the actual shortcomings of the analogies and parallels made by its advocates. When discussing the Russian invasion of Ukraine, there are a variety of related regional issues at play. But the anti-Israel cause simply isn’t one of them. As an estimated five million Ukrainians flee their country, seeking peace elsewhere, notably in Israel itself, anti-Israel activists in Canada are attempting to advance their own personal agendas, and piggyback off the suffering of regular people in Ukraine to further their own cause.

While it may be tempting to do, this is inappropriate, morally obtuse, and supremely self-interested. There is no justification for twisting facts, and taking advantage of civilians suffering in Ukraine, to push for a personal agenda that has no relation to the war in Eastern Europe. People are entitled to whatever beliefs they wish, regardless of their accuracy, but to force it into someone else’s suffering is inexcusable.