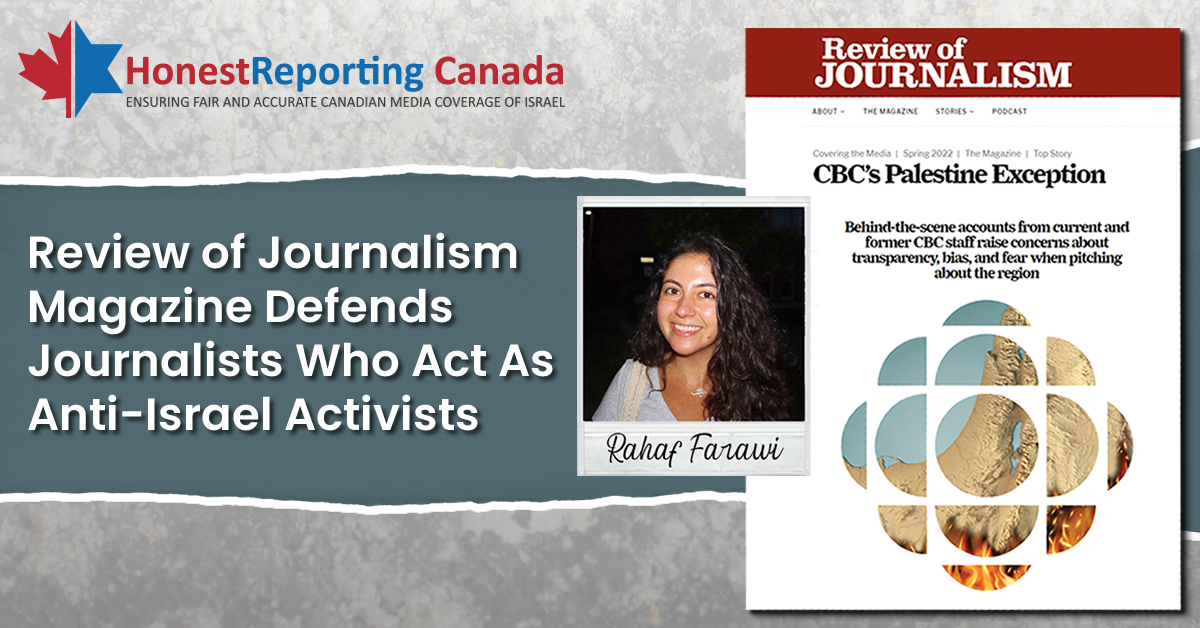 The intractable “Israeli-Palestinian conflict” is considered one of the most difficult beats for journalists to cover.

But a recent column in Review of Journalism, a Toronto-based magazine entitled: “CBC’s Palestine Exception,” Rahaf Farawi, a Podcast Producer for the magazine and a committee member with the Toronto Palestine Film Festival, not only grossly over-simplifies – and in some cases, misrepresents – the complexities and chronology of the Israeli-Palestinian conflict, but also the dynamics behind the scenes in Canada.

For example, Farawi refers to “the Israeli occupation” of Gaza, which is utterly false. Israel fully withdrew its soldiers and civilians alike, nearly 10,000 in total, from the coastal enclave in 2005. She also quotes Greg Shupak from the University of Guelph, who brazenly and falsely claimed that “Israel is founded on ethnically cleansing 750,000 Palestinians…” This is also utterly fictitious. While roughly that number of Arabs left Israel during its independence in 1948 – roughly equivalent to the number of Jews from Arab lands forced from their homes during the same period – Israel in no way ethnically cleansed its land of Arabs. Not only did many of these Arabs leave Israel at the encouragement of their own leaders, but the population of Arabs in Israel has risen dramatically, with more than 2.2 million Israeli-Arabs as of 2022.

Farawi also makes reference to the 2021 court case regarding Shimon HaTzaddik, or known in Arabic as Sheikh Jarrah, the eastern Jerusalem neighbourhood where a group of illegally residing tenants were legally recognized as being unlawfully present in their homes, having not paid rent. But Farawi merely refers to them as “Palestinian families in Sheikh Jarrah were facing forced expulsions from their homes,” completely disregarding the entire context of this incident.

Farawi’s essay is not merely a commentary on the 2021 Gaza war and one which depicts Israel as the aggressor, but on the response to an anti-Israel open letter which was circulated at the time. Signed by over 2,000 people, including 500 journalists, the letter accused Israel of perpetrating crimes against Palestinians and claimed that Canadian media outlets are insufficiently pro-Palestinian.

Rather than recognizing the scandal inherent in having journalists openly sign an anti-Israel letter riddled with factual inaccuracies and partisan bias, thereby jettisoning their journalistic objectivity and neutrality, Farawi instead accuses CBC of favouritism toward Israel.

Farawi quotes multiple individuals who bizarrely claim that Canadian news media outlets are timid when it comes to reporting on the Israeli-Palestinian conflict.

In her column, she quotes Mark Ayyash, a professor at Mount Royal University in Calgary who theorizes without evidence that news “editors are either themselves terrified or they’re ideologically committed to Israel.” This has not stopped Ayyash from spewing anti-Israel disinformation, as he did on Al Jazeera in April 2022.

Farawi also quotes Nahla Abdo, a professor at Carleton University in Ottawa, who claims there is a widespread “general unwritten rule” to underreport on the Palestinians because “they’re not worthy of being aired.”

This is a surprising claim to make. CBC News regularly covers the Israeli-Palestinian conflict, and the Palestinian point of view is given widespread attention. Whether it’s by promoting an anti-Israel film as part of Jewish Heritage Month accusing the Jewish State of stealing Palestinian land, using a culinary show as a platform to spread anti-Israel propaganda,  and even publishing a highly misleading segment on CBC Kids News about Israel.

Simply put, not only is there no evidence that the news media in general, and CBC News in particular, ignores the Palestinians, there is ample proof that the public broadcaster regularly – perhaps even disproportionally – reports on this news story.

Farawi also bemoans the fact that CBC News removed some of their journalists from covering the Israeli-Palestinian conflict as a result of their having signed this anti-Israel open letter. Unfortunately, this correct, if modest step, has now been reversed, and now journalists who added their names to the letter are back to covering this highly sensitive news story and producing anti-Israel coverage.

Farawi’s article features an editor’s note claiming that: “The Review of Journalism spoke with numerous former and current CBC journalists for this story. All asked for anonymity out of fear of impact on their current employment and/or professional reputation. They are referred to in this piece interchangeably as journalist, reporter, staffer and employee. We thank these journalists for speaking with the Review.” Isn’t that convenient, supposedly former and current CBC journalists refused to go on the record for this story.

While Farawi draws a picture of a shadowy pro-Israel lobby, where she specifically mentions a former CBC employee’s allegation that HonestReporting Canada intimidates Canadian journalists into submission, this is a gross misrepresentation of the truth. In reality, when journalists sign an open letter which falsely accuses Israel of the “ethnic cleansing” of Palestinians, they are in effect identifying themselves not as journalists, but as activists.

Farawi quotes an anonymous journalist making the unsubstantiated allegation that “pro-Israel organizations who have made a concerted effort to conflate criticism of Israel with racism against Jews.” The article even mentioned that “In an op-ed for Al-Jazeera, journalist Andrew Mitrovica wrote, ‘For CBC, a dog story is more important than Israel’s apartheid.’ The open letter also called out CBC for failing to report on it.” This is the same Andrew Mitrovica, a Professor at Sheridan College, who last year we exposed for his engaging in hate by dehumanizing Israelis who serve(d) in the IDF.

Journalistis who signed this anti-Israel open letter did so not only in poor taste, but contrary to CBC’s own Journalistic Standards and Practices, which makes clear that “CBC journalists do not express their own personal opinion because it affects the perception of impartiality and could affect an open and honest exploration of the issue.”

CBC News has shown little hesitation in covering the Israeli-Palestinian conflict, and giving a voice to the Palestinians. While multiple voices have a right to be heard when it comes to the Middle East, anti-Israel activists have no right to abuse their platforms as journalists to push their personal agendas, and defending that right serves only to cheapen the entire journalistic profession and the CBC’s reputation.

Farawi is either an ignorant fool or a lying opinionist; certainly not a journalist. Her choice, by the way.
The CBC has long lost credibility with many Canadians who recognize the organization as a pawn of left wing adherents as well as a variety of terror supporting groups.