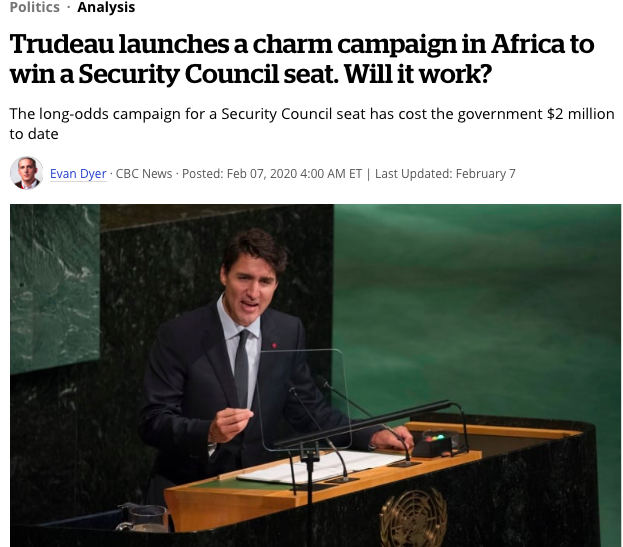 Today, CBC Ombudsman Jack Nagler released a review carried out at HRC’s behest regarding a February 7 CBC “analysis” report by Evan Dyer which claimed without any supportive evidence that the Harper government’s support for Israel was one of the main reasons that Canada failed in its bid to win a Security Council seat in 2010.

As we told the CBC, there’s no evidence which substantiates this matter as voting was done by closed ballot. We do not know why Canada did not secure a seat at the Security Council, we can only speculate. Accordingly, we felt that Mr. Dyer’s personal opinion was disguised as news as this was a subjective matter, not objective truth.

While the CBC Ombud felt that there was no violation of CBC policy, he did concede the following point of HonestReporting Canada’s:

I agree with you that a reporter can run into trouble if they assert as fact something which is in dispute. I also agree with you that in this instance it would have been better to qualify the statement which linked Canada’s support of Israel to its failed bid for a Security Council seat in 2010 by saying “It’s likely that…” or another similar device. “

Appended below, here is the full review by the CBC’s Ombudsman entitled: “Security Council Politics”

Complainant Mike Fegelman objected to a CBC analysis of Canada’s current campaign to win a seat on the United Nations Security Council. The last time Canada tried to win a seat was in 2010, and the article said that one of the reasons Canada failed back then was the Harper government’s record of support of Israel. Mr. Fegelman said that is a disputable point, and asked me to judge whether CBC failed by citing it as fact without attribution. 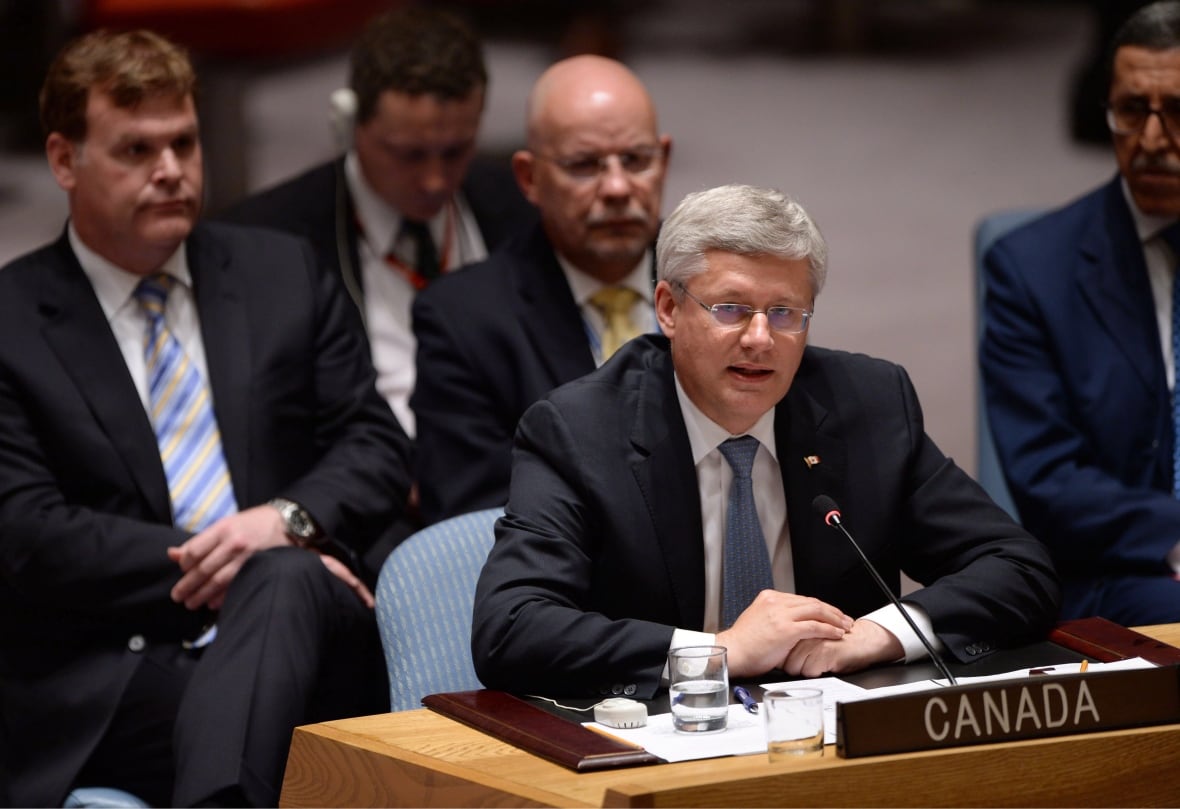 You expressed concern about a February 7th article published on CBC’s website under the headline that read: “Trudeau launches a charm campaign in Africa to win a Security Council seat. Will it work?”.

The article, written by Evan Dyer of CBC’s Parliamentary bureau, was labelled as “Analysis”. The author examined the status of Canada’s efforts to secure a seat on the United Nations Security Council. One issue that he suggested could hinder support for Canada is a perception that it is too supportive of Israel:

About 80 African and Islamic countries have tended to identify strongly with the Palestinian cause, using their UN votes to punish countries they see as taking Israel’s side.

Canada has for years made a point of voting against resolutions on the Israeli-Palestinian conflict — including those that accord with Canada’s own positions and laws — to argue that there is an excessive and unhealthy focus on the Jewish state at the UN.

It’s one of the main reasons why, under the government of Stephen Harper, Canada failed to secure a Security Council seat.”

The final sentence of that passage troubled you in your capacity as the head of HonestReporting Canada, an organisation that promotes “fairness and accuracy in Canadian media coverage of Israel and the Middle East”:

(Mr. Dyer) claims that it’s a matter of undisputed fact that Canada lost a seat in the Security Council, partially due to its support for Israel. That may or may not be the case, but the truth is, we just don’t know because all voting is done by secret ballot.

It’s one thing for Mr. Dyer to attribute this statement to experts, or to use the word allegedly somewhere in this statement, or the word “likely,” but to state this conclusively is a problem. For example, David Frum in the National Post at the time argued that it may not have been Canadian support for Israel that saw the Conservatives lose a seat.” 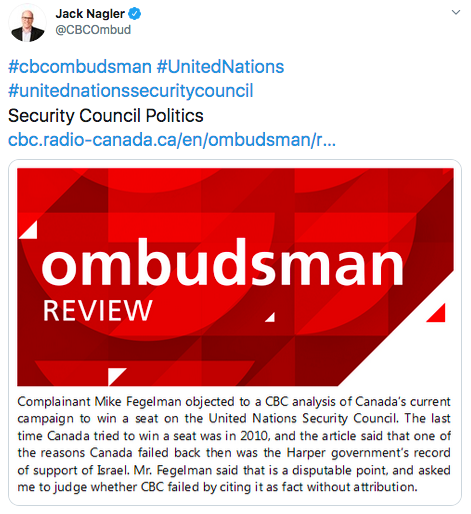 Paul Hambleton, Director of Journalistic Standards, replied on behalf of CBC. He agreed that the passage in question could have included an attribution or qualification of some sort, but disagreed that the absence of same meant the analysis was unsound:

(Mr. Dyer) has buttressed his claim that Harper’s support for Israel was a reason Canada did not win a seat in 2010 with the fact that roughly 80 countries in the UN General Assembly “identify strongly” with Palestinian issues, and that over the years Canada has itself has voted against resolutions that would condemn Israel on various matters. These are facts.

What Mr. Dyer did then was to make the analysis that this pro-Israel position was indeed one of the main reasons why Canada did not secure enough votes in 2010. I feel this was a reasonable conclusion to draw, and is certainly not one that is in dispute.”

Mr. Hambleton said that in this type of analytical journalism, Mr. Dyer was entitled to draw on his experience and expertise to “move beyond that level of attribution and make a determination based on supporting facts.”

Mr. Hambleton argued that subsequent paragraphs in the article bear that out, as Mr. Dyer described how Norway and Ireland’s current relationships with Middle East politics leave them better positioned to pick up support in the race for a Security Council seat.

The article was labelled as “Analysis”, and here is how CBC’s Journalistic Standards and Practices describe that term:

When appropriate, news and current affairs staff offer reports we refer to as “analysis”. Here, reporters may make observations and draw conclusions based on facts as well as their own experience and expertise.

Their intent is to give the audience insight into the true nature of events, not to be a forum for the personal opinions or preferences of the author.”

In more colloquial terms, analysis is meant to help the audience answer the question “what’s really going on here?”, but that is not a licence to take sides on a matter of public dispute.

Mr. Dyer, in assessing that Canada’s perceived stand on Israel is a factor in its pursuit of a Security Council seat, drew a conclusion based on a set of known facts, and on his own insights from observing politics both in Ottawa and at the United Nations. Mr. Hambleton is correct that he was entitled to do so. Readers, in turn, are entitled to disagree with those conclusions, but that does not mean the analysis violates the JSP.

I agree with you that a reporter can run into trouble if they assert as fact something which is in dispute. I also agree with you that in this instance it would have been better to qualify the statement which linked Canada’s support of Israel to its failed bid for a Security Council seat in 2010 by saying “It’s likely that…” or another similar device.

However, I note that the sentence is already qualified to a degree. Mr. Dyer wrote that Mideast policy was “one of the main reasons” Canada lost the seat, not that it was the entire reason. Surely that is a signal to the reader that other factors were also at play. It matters, too, that Mr. Dyer never hints one way or another whether Canada should prefer a Security Council seat to holding the line on its current Middle East policy. That would be an example of an opinion that does not belong in a CBC analysis.

Put all that together and it seems clear to me that there was no violation of policy in this column.