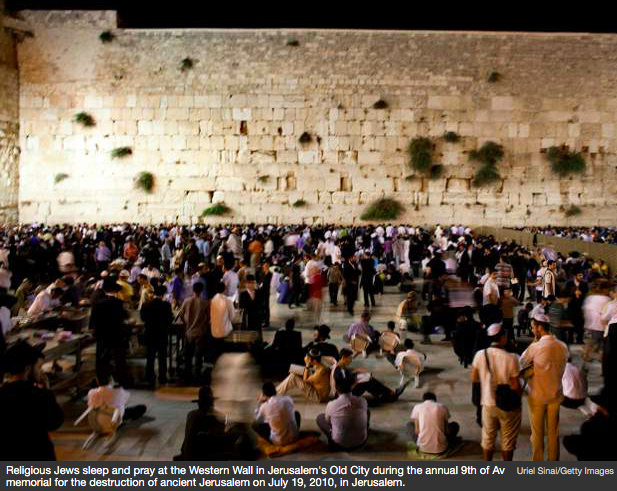 Courtesy of Barbara Kay at the National Post today, read abort the UN’s moral bankruptcy and its efforts to be revisionist historians by denying the Jewish and Christian connection to Jerusalem and by proclaiming the Temple Mount site as being an exclusively Muslim heritage site.

The United Nations Educational, Scientific and Cultural Organization was founded at the end of the Second World War on the understanding that economic and military treaties would not by themselves bring about peace. UNESCO’s mandate is to promote “humanity’s moral and intellectual solidarity” through universal education for children, “intercultural understanding” and the protection of “world heritage” sites of universal value.

This is all quite admirable, but when you’re talking about any UN organization, there’s many a slip between the aspirational cup and the reality lip: the reality in this case that many UN members are so obsessed with their hatred of Israel that words like “intercultural understanding,” and “moral and intellectual solidarity” are meaningless.

Charges of bias against Israel by UNESCO have been levelled in the past, but since 2010, when the Palestinians were admitted as members (and Israel and the U.S. suspended their funding to the body, thereby losing voting rights), it has become impossible even to pretend that Israel gets a fair shake from the group. Already frayed, under Palestinian influence, UNESCO’s ideals lie in tatters. For even the once-benign word “heritage” has now been weaponized by these singularly obsessive Israel haters.

Israel has officially broken with UNESCO over a proposed resolution drafted by the Palestinians, whose language deliberately detaches Jewish ties from Judaism’s holiest sites in referring to the Temple Mount — Har HaBayit in Hebrew, Haram al-Sharif in Arabic — only as Haram al-Sharif. These are fighting non-words, and part of a larger Israel-deligitimating campaign that started the day the Palestinians joined UNESCO.

Passed last Thursday at the committee stage, the resolution also describes sacred Jewish sites like the Tomb of Rachel in Bethlehem and the Tomb of the Patriarchs in Hebron (burial site of Abraham, Isaac and Jacob — you don’t get more “heritage” than that) — as “two Palestinian sites” and “deeply regrets” Israel’s refusal to remove them from its national heritage list.

There’s lots more in this vein, but the clear intention of the resolution is, as UN Watch declared,  “historical revisionism,” an attempt to reframe objective history through the lens of a fictitious Palestinian narrative that preposterously fantasizes the presence of Muslim Palestinians in antiquity (and which effectively cleanses Christianity of its own history to boot). In reality, before the seventh century CE when Islam was founded, the Muslim presence in Jerusalem in the days of the Temple was equivalent to the Christian presence in Macchu Pichu in the days of the Incas.

Israeli leaders suspended co-operation with UNESCO, and hammered the UN for its fecklessness in presiding over such nonsense. Amazingly — given the UN’s usual indifference to Israel’s moral claims — UNESCO and UN leadership were embarrassed by the brazenness of this Palestinian mischief-making and scrambled to distance themselves from the resolution. UN Secretary-General Ban Ki-moon firmly upheld the Temple Mount’s status as “the holiest place in Judaism,” while in a response to a denunciatory letter from the Zionist Union Knesset member, Tzipi Livni, UNESCO Director-General Irina Bokova (in a move reminiscent of Elizabeth May finessing her role in a recent Green party anti-Israel resolution) protested “such decisions are discussed and taken by the member states” and have nothing to do with her.

The chairman of UNESCO’s Executive Board, Michael Worbs, apologized for the resolution’s wording, and proposed a delay to a formal vote on the resolution (scheduled for Oct. 18, after the time of writing), which must be validated by the 58 members of his board, in the hope that the wording will be changed. There is little chance of that, though.

The absurd part of this story is that even if the resolution passes, it cannot void the fact that Jerusalem, its Old City and its walls have already been intractably inscribed as a World Heritage Site by UNESCO in 1982, denoted as having meaning for three religions. So today’s resolution would have no political teeth.

The Palestinians know that. But, like the campus boycott, divest and sanction crowd, they also know that it is “narratives” that win hearts and minds. In shamelessly propagating the crazy idea that Palestinians — who in reality trace their history as a people to 1948 — have been a people for thousands of years, historical deniers know they can count on widespread historical ignorance, enough to win a critical mass of hearts and minds. Truth means nothing to such schemers. As Palestinian Authority President Mahmoud Abbas, who actually knows the truth, taunted Israeli Prime Minister Benjamin Netanyahu in 2011: “Oh, Netanyahu, you are incidental in history; we are the people of history. We are the owners of history.” By “you,” he did not mean Israel. He meant Jews.

The Palestinians are using UNESCO-conferred credibility to keep playing their long game of delegitimating Israel as a nation. UNESCO should consider its own long game: what does it want to be perceived as? A credible organization committed to cultural pluralism and actual heritage protection, or hand maiden to anti-Semitism? If the former, then the Palestinians must be expelled from UNESCO.