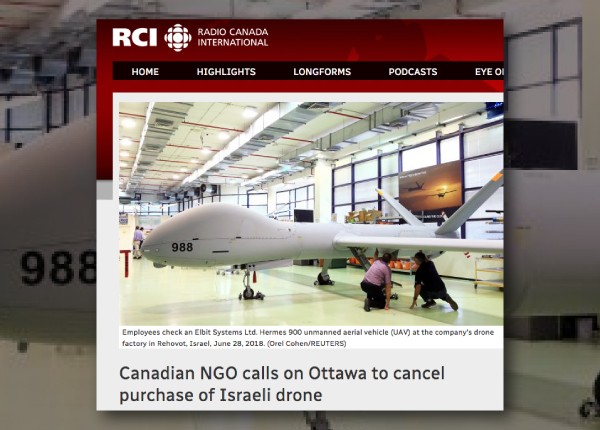 On February 16, Radio-Canada published an article to its website about how the anti-Israel organization CJPME, has called on Canada “to cancel its $36-million purchase of an Israeli-made civilian maritime surveillance drone over concerns about the manufacturer’s human rights record.”

The report by Radio-Canada’s Levon Sevunts (pictured right) masquerades propaganda as legitimate reporting and was press release journalism at its worst.

CJPME is a fringe Canadian NGO which calls for boycotts of a number of Israeli products and of various stores in Canada over their business relationships and activities in Israel, and Judea and Samaria, the “West Bank”. Its past chairman, Dimitri Lascaris, was rebuked by all of Canada’s major political parties for engaging in antisemitism.

Radio-Canada’s article quoted Michael Bueckert, vice president of CJPME saying: “Canadian taxpayer dollars should not be going to bolster the profits of an Israeli weapons company which builds drones to monitor and target Palestinian civilians under occupation.”

This inflammatory and unfounded claim that Israel uses drones to intentionally “monitor and target Palestinian civilians” depicts Israel as a country that engages in state terrorism. In sharp contrast, Israel solely targets terrorists and terror-infrastructure and the Israel Defense Forces have been lauded for doing more to safeguard civilian life than any other army in history.

Radio-Canada’s allowing such an allegation to be published and to not be rebutted was tantamount to journalistic malpractice and this runs counter to RCI’s Journalistic Standards and Practices.

The article then quoted Bueckert saying that “The Hermes 900 StarLiner drone is a civilian version of the lethal military drone the Hermes 900, which was first developed and tested during Israel’s 2014 assault on Gaza, when Israeli drone strikes alone killed 860 Palestinians, including 164 children.”

Bueckert attempts to use casualty statistics as a moral barometer. However, as Benjamin Disraeli said, there are three kinds of lies: lies, damned lies, and statistics. These casualty statistics are unreliable as the true percentage of civilian and combatant deaths in these hostilities are unknown. These numbers also don’t reveal the Israeli efforts to protect civilians, Israeli and Palestinian alike, and it doesn’t contextualize how the Hamas terror group endangers civilians by turning residential neighbourhoods into battle zones.

Untold by Radio-Canada, Israeli operations in Gaza in the Summer of 2014 were due to increasing rocket and mortar fire from Palestinian terrorists. The Independent newspaper noted that the “IDF claimed more than 3,700 rockets had been fired towards Israel by 20 August and it had destroyed 32 Hamas tunnels” and the New York Times reported that Israel claims it killed 900 terrorists.

While Radio-Canada’s article says that “Officials at Elbit and the Israeli embassy in Ottawa did not respond to Radio Canada International’s repeated requests for comment,” no pro-Israel sources were quoted in the article which could have brought context to the issue(s) at hand, and balance, which would have served as a counterpoint to the incendiary claims made by CJPME.

Importantly, the Government of Canada and all major federal political parties are steadfastly opposed to the BDS movement, which Prime Minister Trudeau regards as antisemitic.

Last year, HonestReporting Canada took Radio-Canada to task for promoting an anti-Israel art exhibit in Montreal, for being manipulated by anti-Israel groups with a deceptive push poll, and for publishing an article which blamed Israel for Gaza’s plight in fighting the coronavirus pandemic. Radio-Canada subsequently deleted the article following HRC’s complaint.

There is nothing controversial about Canada buying drones made by a private Israeli company for arctic maritime surveillance. According to a statement by Marc Garneau, then Transport Minister and now, Canada’s Minister of Foreign Affairs, these drones serve to protect our endangered species and our marine environment. As a cornerstone of the Canada-Israel bilateral commercial relationship, the Canada-Israel Free Trade Agreement (CIFTA) was renewed in 2019 and since 1997, trade between the two countries has more than tripled, and in 2017 was valued at $1.7 billion.

Radio-Canada’s article has only served to grant BDS advocates a platform in their quest to turn Israel into a pariah state. Shame on our public broadcaster for being complicit in this anti-Israel propaganda.