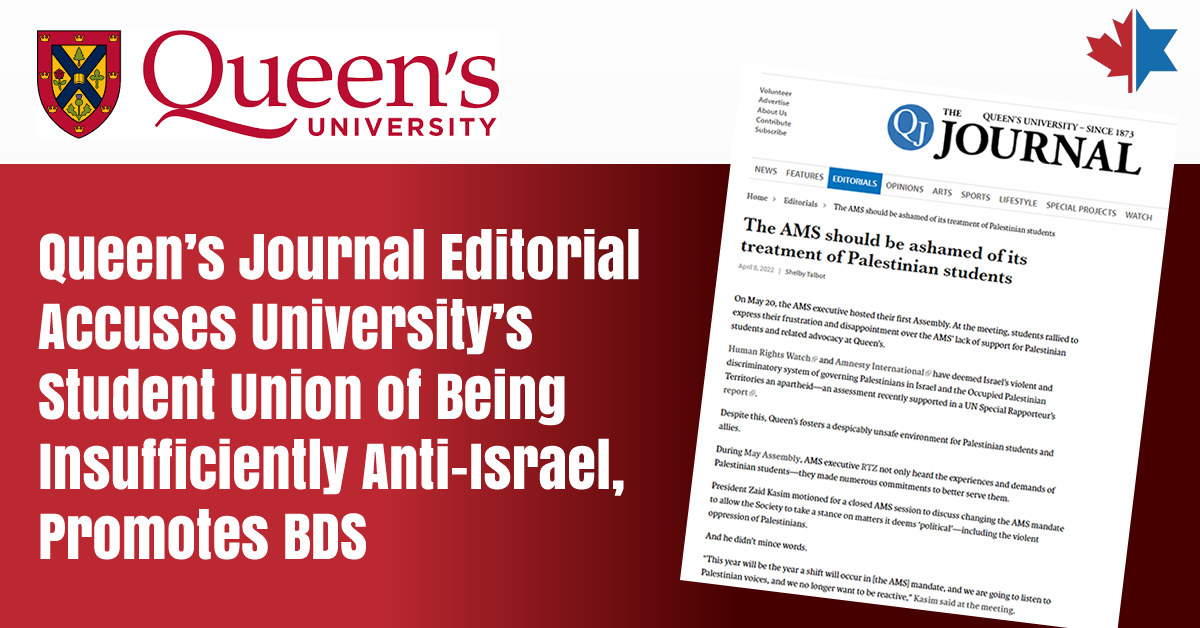 An April 8 editorial in the Queen’s Journal by one of the newspaper’s Editors in Chief, Shelby Talbot, “The AMS should be ashamed of its treatment of Palestinian students,” took the university’s student union, the Alma Mater Society (AMS), to task for what it considers its insufficient support for the Palestinian cause.

In attempting to make its case, however, the editorial was rife with half-truths and otherwise egregious disinformation about Israel.

For example, Talbot wrote the following: “Human Rights Watch and Amnesty International have deemed Israel’s violent and discriminatory system of governing Palestinians in Israel and the Occupied Palestinian Territories an apartheid—an assessment recently supported in a ​​UN Special Rapporteur’s report.”

While Human Rights Watch and Amnesty International have indeed accused Israel of practicing “apartheid,” the claims of both organizations should be taken with a massive dollop of skepticism, if not outright rejection. Both organizations have long bizarrely focused an inordinate amount of attention on Israel, a vibrant liberal democracy where citizens of all races and religions enjoy equal rights. These reports, rather than reflecting the reality on the ground, rely on a chaotic mix of allegations, distortions and falsehoods denying Israel’s existence as the nation state of the Jewish people.

Importantly, the rights of Israeli Arabs are so comprehensive and protected, that to accuse Israel of apartheid is simply misinformation and libel. Keep in mind, Israel is a country where an Arab Supreme Court judge sent a Jewish president of Israel to jail. Israel is the only liberal democracy in the Middle East where its 20% Arab minority enjoys full equal rights before and under the law. Israeli Arabs consistently affirm they would rather live in Israel as a minority than anywhere else in the Middle East as part of the majority. Israel’s vibrancy, its openness, and tolerance have solidified its credentials as a progressive liberal democracy whose Arab minority not only enjoys the same rights as all other Israeli citizens, they occupy positions at the pinnacle of Israeli society. Arabs have been elected to Israel’s parliament, they fight in the Israel Defense Forces and partake in every facet of Israeli society. Furthermore, Israel has over 400 mosques throughout the country and there are zero synagogues (and Jews) in Gaza and Palestinian Authority controlled-areas.

Talbot demands that the AMS follow in the footsteps of some other Canadian universities, and adopt the anti-Israel BDS (Boycott Divestment Sanctions) resolutions. What she neglects to mention is that these resolutions not only do not serve the interests of Palestinians in any way whatsoever, they have also been increasingly – and rightly – condemned by university administrators as discriminatory, with no place at a Canadian post-secondary institution.

At the University of Toronto, the university administration recently withheld more than $10,000 allocated to the U of T Graduate Student Union (UTGSU), identifying those funds as being earmarked for anti-Israel activities on campus. And at McGill University, the administration has threatened to terminate their agreement with the Students’ Society of McGill University (SSMU) unless the student union takes “prompt and appropriate remedial action” against a recent anti-Israel resolution, describing it as “in contradiction with the university’s values of inclusion, diversity and respect.” Meanwhile, the University of British Columbia (UBC) condemned a recent student union vote to divest from several companies with business in Israel, rejecting the movement to boycott the Jewish state as at odds with the school’s values.

In her editorial, Talbot also accused Queen’s University of fostering “a despicably unsafe environment for Palestinian students and allies” and refers to the “anti-Palestinian violence rampant at Queen’s.”

No evidence was marshalled to support these claims of widespread anti-Palestinian activity at Queen’s University, but by proposing that the AMS advocate a hateful and discriminatory policy which serves to erase the Jewish people’s three thousand years of history in their ancestral homeland, she is attempting to put out an illusory fire by creating a very real one.

Perhaps Talbot would be surprised to learn that in fact, Jews in Canada represent the country’s single largest target of religiously motivated hate crimes according to Statistics Canada.

During times of conflict in the Middle East, Jews throughout the world face an uptick in antisemitic hate crimes, including violent attacks. During the May 2021 conflict between Hamas terrorists and Israel, Jews in both Canada and the United States were physically attacked simply for being Jewish.

As tragic and infuriating as these attacks are, they unfortunately should come as no surprise to anyone. Careless and baseless rhetoric, such as denying the Jewish people the right to self determination in their own historic homeland, despite mounds of evidence proving beyond a shadow of a doubt their indigeneity, not only do nothing to advance the cause of peace in the Middle East, but to prioritize anti-Israel disinformation, and demonize all Jews and their allies.

Palestinians, many of whom are living in squalor and lacking many civil democratic rights, certainly deserve better. But the culprit is not the student union at Queen’s University for insufficiently demonizing Israel, but the incessant anti-Israel rhetoric, which serves only to muddle fact and fiction, truth and falsehoods. Only by acknowledging Israel’s right to exist as a Jewish state can university activists claim to support the Palestinians, rather than simply demonizing Israel. The Palestinians deserve better than these half-baked calls for support.

To communicate your concerns directly to the Queens Journal, send emails to: Journal_editors@ams.queensu.ca.