See below: Globe and Mail Photo

Two major Canadian news organizations recently shone a spotlight on Israel’s security checkpoints, without providing enough information for viewers to understand them in context. While the coverage showed Israelis with guns exerting authority over Palestinians, they omitted the reason the Israelis were there in the first place: to stop terrorists like the Palestinian bomber who killed 5 and wounded over 35 at a shopping mall in Netanya today.

On November 20, CBC Newsworld presented the film “CHECKPOINT” on its documentary program “The Passionate Eye.” Shot between 2001 and 2003, Checkpoint showed images of Israeli soldiers controlling the movements of unarmed Palestinians, often causing the Palestinians to experience hardship. But CBC showed the documentary without providing any information about the deadly terror attacks that led to the checkpoints being there, leaving viewers to conclude that they existed simply to cause hardship for Palestinians.

Although we believe we have an extremely well-informed audience, it’s possible that some viewers may not have remembered that the second Intifadah had begun during this period, or that the Oslo peace accord had failed, events around which we have shown many documentaries. In an effort to clarify this, off the top of the doc we have added a reference to these historic events, as well as the increase in tensions, the suicide bombings and civilian deaths. 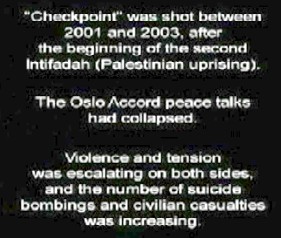 Accordingly, upon re-broadcasting the film, CBC inserted additional contextualizing information (see video) at the beginning of and during the presentation:

“Checkpoint” was shot between 2001 and 2003, after the beginning of the second Intifadah (Palestinian uprising). The Oslo Accord peace talks had collapsed. Violence and tension was escalating on both sides, and the number of suicide bombings and civilian casualties was increasing.

HonestReporting Canada congratulates the many members who contacted CBC, and commends CBC for agreeing to add context.

Contact CBC at audience_relations@cbc.ca or 1-866-306-4636. Please forward a copy of your communications to action@honestreporting.ca. 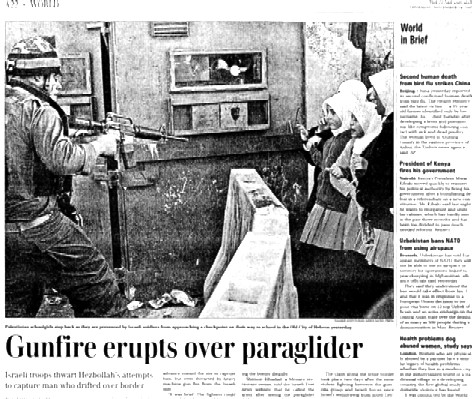 On November 24, the Globe and Mail published a large photo at the top of Page A22, showing an Israeli soldier apparently aiming his weapon at Palestinian schoolgirls. There was no relation between the photo and the smaller story that appeared beneath it, about a hang-glider who drifted from Israel into Lebanon. The caption on the photo read:

“Palestinian schoolgirls step back as they are prevented from approaching a checkpoint on their way to school in the Old City of Hebron yesterday.”

HonestReporting Canada contacted the Globe and Mail to point out that photos should carry enough context to inform and not mislead. As the Society of Professional Journalists’ Code of Ethics states, photos should not “oversimplify or highlight incidents out of context.” (For example, most readers do not know that, while schoolchildren may not appear to pose any threat to soldiers, in 2005 over 50 Palestinian minors were caught with weapons or explosives at security checkpoints.)

A senior editor at the Globe and Mail responded that, while the newspaper will continue to run stand-alone photographs, this particular photo lacked sufficient context and explanation. The newspaper agreed that the photo required a lengthier caption or a separate story in order to adequately explain the incident. The editor stated that the Globe and Mail will review its internal procedures on the use of such photographs in the future.

The editor stated that the Globe and Mail believes the Letters section is the best venue for addressing such issues, and the newspaper ran several letters (see here and here). However, HonestReporting Canada agrees with the Ontario Press Council that “publication of a letter to the editor does not, in itself, redress a complaint.”

Nevertheless, HonestReporting Canada commends the Globe and Mail for acknowledging the lack of context and for agreeing to review its internal procedures on the use of such photos.

How You Can Make a Difference

Monitor your local news coverage for fairness and accuracy, inform HonestReporting Canada when these basic rules of objectivity are violated, and contact your local editor.

Making a Difference, With Your Help (August 16,...