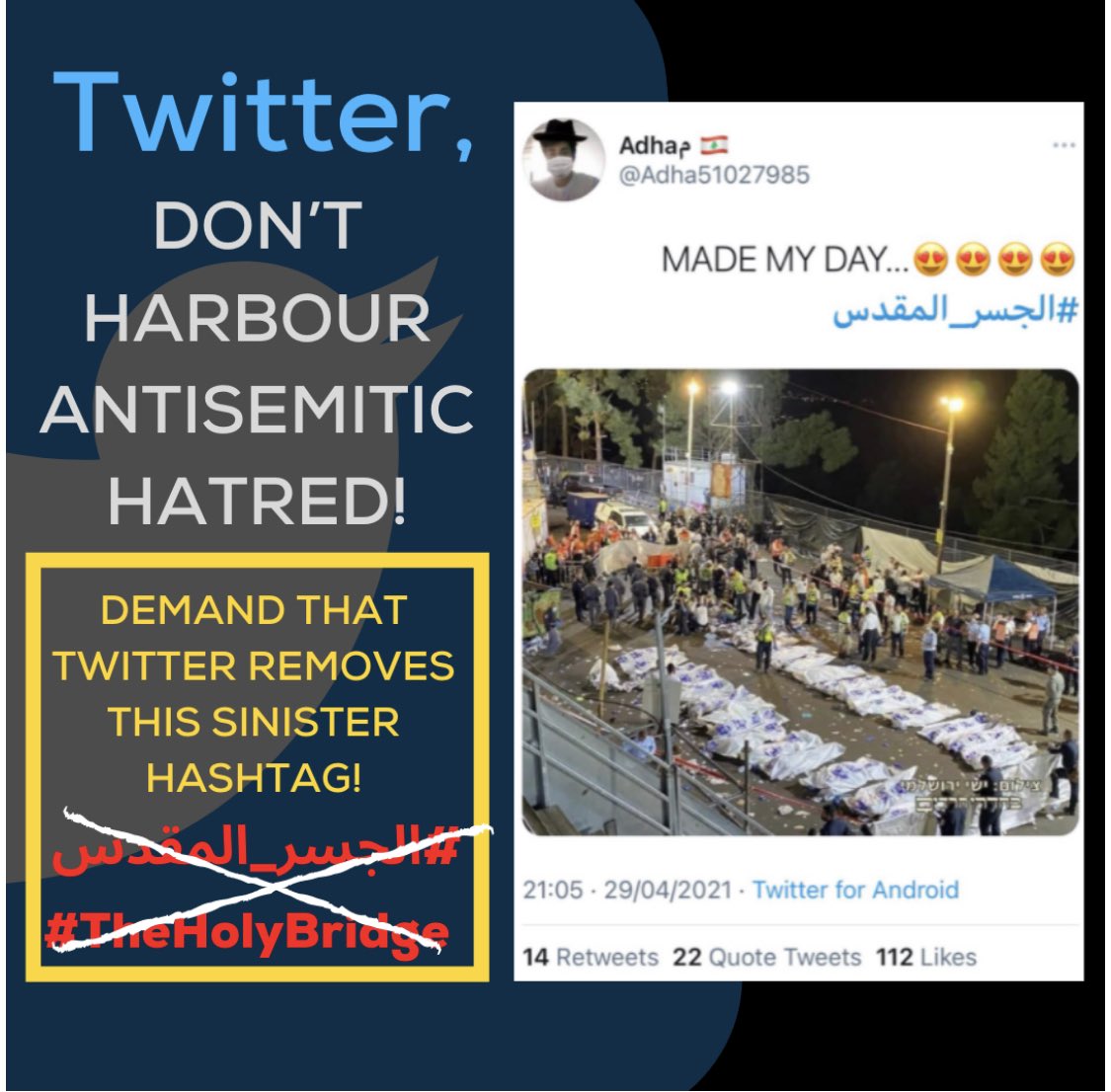 Last week, Israel suffered one of its biggest peacetime tragedies. Each year on the Jewish religious festival of Lag B’omer, Jews from across Israel gather at Mount Meron, the burial site of Rabbi Shimon Bar Yochai, a second-century mystic, for prayers, dancing and music.

This year, after Israel successfully emerged from the coronavirus pandemic, nearly 100,000 Jews attended the celebrations, and due to reasons still unclear, a horrific accident and stampede left 45 people dead, including many children and 2 Canadians, Shraga Gestetner and Dovi Steinmetz, both from Montreal. 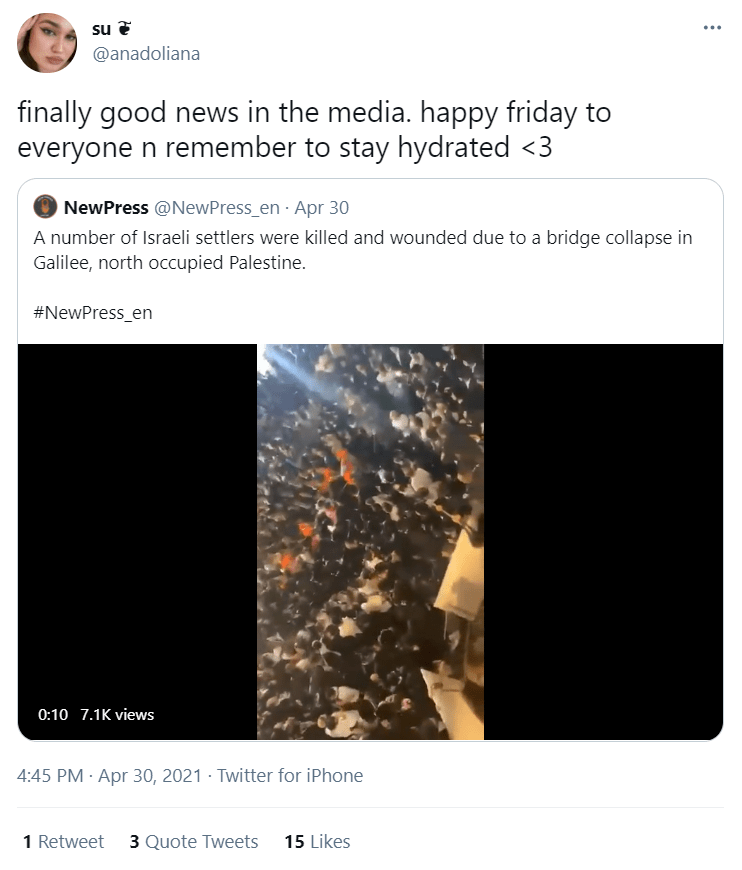 In short order, condolences poured in from around the world.

Prime Minister Justin Trudeau posted condolences from his official Twitter account writing: “Tragic news from Israel today – Canada is sending its deepest condolences to everyone who lost a loved one at Mount Meron, and wishing a full and speedy recovery to those who were injured. We’re keeping you all in our thoughts.”

But sadness and solidarity, though widespread, was not universally shared.

In the dark recesses of social media, pro-Palestinian social media accounts celebrated the Meron deaths, claiming they were divine punishment for Israel having allegedly stolen Palestinian land. On Twitter, the hashtag #الجسر_المقدس spread like a wildfire, referring to the sinister hashtag #theholybridge. 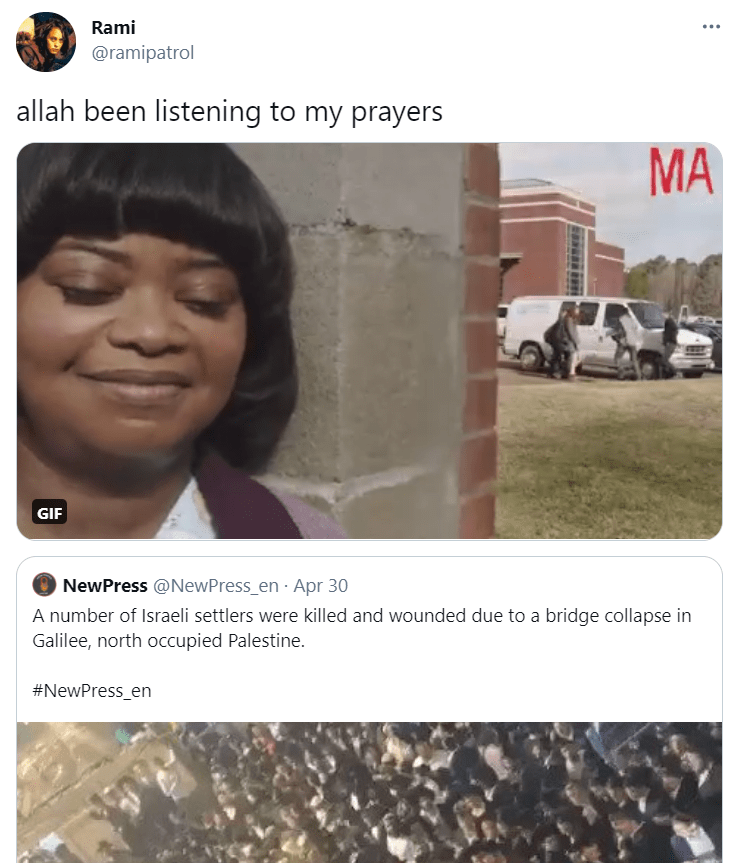 As the Jerusalem Post reported, a significant number of popular Arabic Twitter accounts, some with thousands of followers, celebrated the deaths, calling the fatalities “terrorists,” “monsters,” and “settlers,” even though the location, Mount Meron, is situated in northern Israel and is not disputed territory.

One account with more than two thousand followers called the tragic stampede a “victory.”

Alarmingly, there didn’t appear to be any significant corrective action taken by Twitter in response to the glorification of the deaths of 45 innocents.

Shocking as these posts are, they are far from the first time that social media and Palestinian society has erupted in celebration in response to suffering and death in Israel and elsewhere.

During the Second Intifada and fast forward to present day, when Palestinian terrorists attacked Israeli civilians with shooting attacks, stabbings, suicide bombings and car ramming attempts, jubilant crowds in the Gaza Strip and in Arab-majority areas of Judea & Samaria (the West Bank) celebrated Israeli deaths by handing out candies and other sweets on the streets, as passing cars honked and cheered. After the 9/11 attacks, Palestinians were recorded celebrating the attacks on the World Trade Centre buildings and the Pentagon that saw close to three thousand people murdered.

Tempting as it may be to ascribe these ghoulish actions to a fringe minority of hateful social media commentators and individuals, the chilling reality is that Hamas and the Palestinian Authority (PA) are major incubators and sources of encouragement for this widespread incitement. 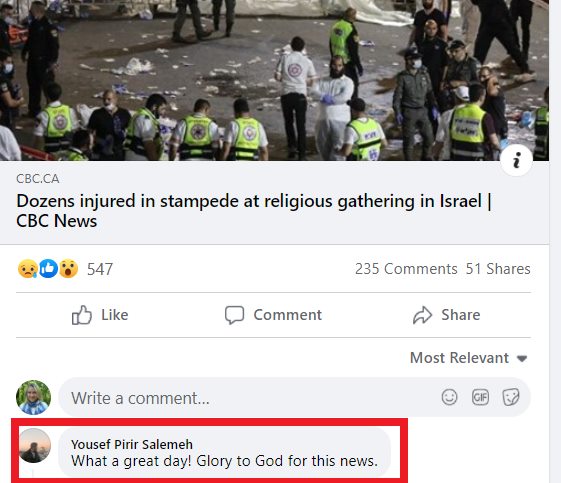 The Palestinian Authority’s incitement against both Israel and Jews more broadly is well documented. Whether in official PA media outlets, in schools, mosques and elsewhere, residents of the Palestinian Authority and abroad are regularly taught that Israel – and Jews – are foreign occupiers who have no historical, religious or other ties to the holy land.

In sharp contrast, when a massive explosion levelled the Lebanese capital of Beirut last summer, killing 207 people and injuring 7,500 more, a municipal building in Tel Aviv was illuminated with the Lebanese flag in a show of solidarity, despite the fact that the two countries are officially at war with one another. Importantly, in the immediate aftermath of the Meron disaster, local Arab villages in Israel set up stations to offer food and drink to evacuees from the site. This is the true moral underpinning of Israel.

All human beings are pained when they see the suffering and death of innocent people, no matter their race, religion, or creed. And Palestinians are certainly no different. But decades of incitement, brainwashing and child abuse against their own people has poisoned the minds of so many of their next generation.

As the world expresses its condolences to Israel on this tragic event, it’s incumbent on the news media to report – unseemly as it is – on the uncomfortable, but persistent glee expressed by many influential Arabic-language commentators who celebrated this tragedy. Only a bright light shone on the dark corners of social media can act as a disinfectant.

Take action now: Call on Twitter to remove the sinister hashtag #الجسر_المقدس / #TheHolyBridge from its platform.