10 PostMedia newspapers today claimed that as a matter of fact, that an “Israeli ???????? missile strike ???? kills four civilians,” including a baby, in Syria. 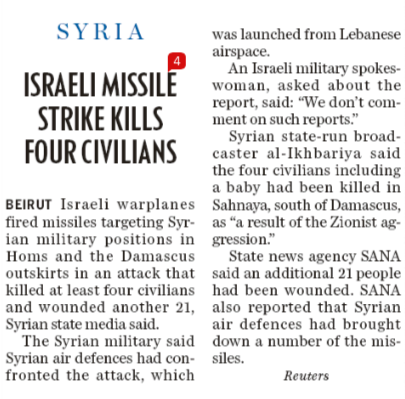 Importantly, these are only claims which were made by state-controlled Syrian ???????? state media, hardly a reliable, independent and trustworthy news source.

What’s unknown at this point is:

1) If Israel did carry out an airstrike
2) The make up of the alleged casualties and whether the four were actually killed and whether they are indeed civilians or combatants, and if a baby is included in the casualty list.

Editors at the following papers should have known better before publishing these claims as fact as this matter has not been independently verified by credible and neutral sources.