In an effort to paint Israel as a country undergoing an historic self-implosion and turmoil, Louis Delvoie engaged in mental acrobatics and drafted a fiction in his August 15 Kingston Whig-Standard commentary entitled: “Chaos in Israel”.

While Israel, like most countries, is struggling with the COVID-19 pandemic, but despite its challenges, Israel is fairing comparatively well with a rate of death per million citizens that is well below that of most developed countries in the Western world, including Canada.

Nearly every day, Israeli researchers and scientists are announcing new progress in the scientific fight against the deadly coronavirus pandemic, ranging from promising vaccine clinical trials and treatments, and most recently, a gargle test which, with 95 percent accuracy, is able to produce COVID test results in only one second.

Beyond Israel’s borders, the Jewish state and the United Arab Emirates (UAE) announced they will be soon be launching full diplomatic relations, in a historic first. The UAE is an influential Gulf Arab state, a significant exporter of petroleum around the world, and the news of the diplomatic breakthrough is a major sign that Israel, far from being the pariah state as Delvoie describes it as being, in fact is enjoying a never-before seen breakthrough in normalizing relations with the broader Arab world.

In fact, Israel’s detente the UAE may be just the tip of the iceberg. This past week, the president of Lebanon, Michel Aoun – a country still technically in a state of war with Israel – publicly mused about accepting a peace agreement with Israel. Such words would have been extraordinarily unlikely even a few years ago. Meanwhile, Bahrain, Oman, Morocco, Kuwait and even Saudi Arabia and inching towards making peace with Israel. So much for Delvoie’s argument that Israel is isolated.

In recent years, Israel has become a high-tech powerhouse in its own right, all the more remarkable considering that at a 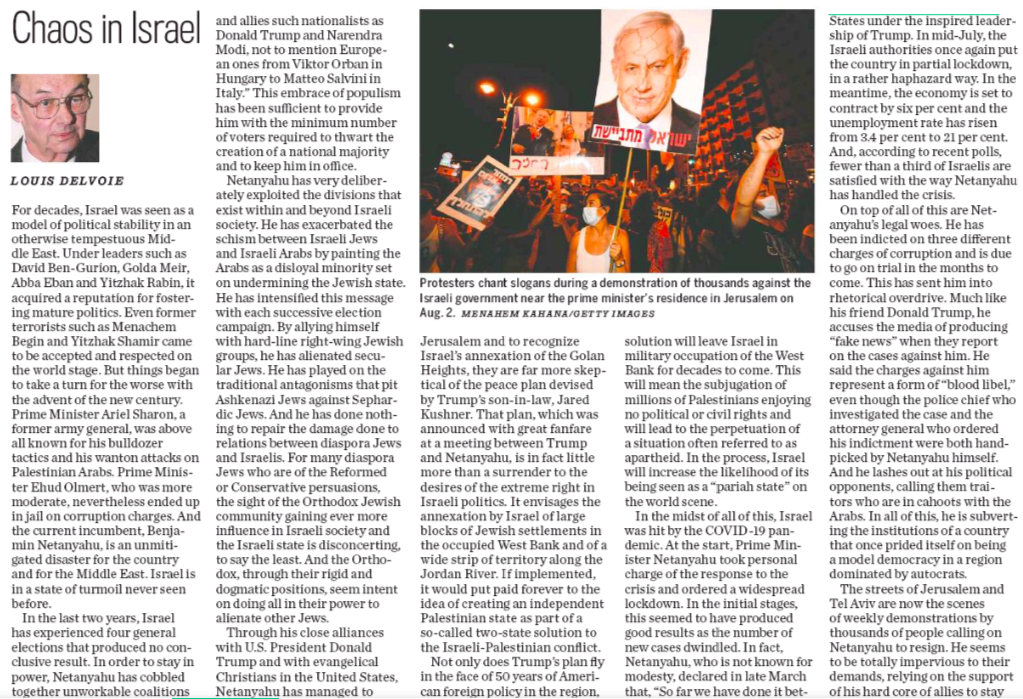 meagre 22,000 square kilometres, it’s significantly smaller than Vancouver Island, and with a population comparable to Quebec – and with virtually no natural resources. After the United States and China, Israel ranks third in the world for the number of countries listed on the NASDAQ exchange, and its percentage of Gross Domestic Product (GDP) spent on research and development is among the highest in the world. Israel has in fact earned the moniker “Start-Up Nation” as a result of its impressive achievements in the high-tech field.

And even Delvoie’s critique of Israel’s seemingly never-ending elections as a sign of distress is a bizarre and self-defeating contradiction. Elections happen in democracies, not in autocracies or dictatorships. Israel is a boisterous, vibrant country full of joie de vivre, and there are a dizzying menu of political parties, seemingly one for every person – two Jews, three opinions, says the old joke – but this is a sign of a vibrant democratic society. Israel’s frequent elections in recent years do not reflect turmoil, but rather the full exercising of democratic rights and a process which one hopes will be more, not less, widespread around the world. Compare Israel’s overabundance of elections with news from many corners of the earth where citizens cannot vote for their own leaders and have no say in the future and outcome of their society. Democracy is imperfect, but it’s certainly better than the alternatives.

Israel’s successes aren’t a secret, but are being noticed around the world. In January, before the COVID pandemic took hold in most of the world, Google reported that based on their search results, Tel Aviv, Israel’s largest city and cosmopolitan centre, was the fifth-highest ranking search for hotel data. Israel’s growth as a tourism hotspot isn’t a one-time aberration either. The number of tourists entering Israel climbed 10 percent from 2018 to 2019, continuing a trend in recent years. And it’s not just tourists who see Israel as safe and secure either. More people around the world are in fact choosing to make the country their permanent home. Israel’s Jewish Agency reported this week that it’s expecting upwards of 250,000 new immigrants to arrive in the next five years – a significant number considering the country’s small size, and is a true testament that Israel is still seen as a beacon of safety and promise to Jews around the world.

Israel, like all other countries, including Canada, is certainly not without its challenges, but far from being embroiled in chaos and turmoil as Delvoie describes, is in fact enjoying a period of stability, peace and prosperity never before seen in its 72 years since independence. That is great news not only for its 9.2 million citizens, but for all citizens of the world who have come to benefit from the Start-Up Nation’s creativity and innovation.

Sadly, commentator Louis Delvoie is out of touch with reality.

UPDATE: September 11, 2020: Our commentary was published in the Kingston Whig-Standard today: