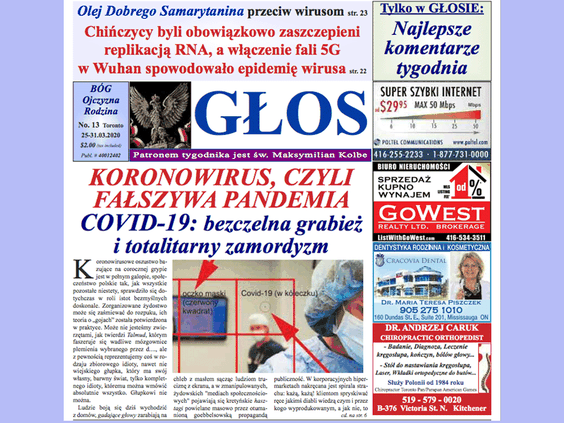 The National Post reports that a Polish-Canadian newspaper linked to a community group that’s received almost $300,000 in government funding, twice published an antisemitic tirade recently that suggested that COVID-19 is a creation of “organized Jewry,” and that Jews were the cause of all the world’s ills.

The story suggests that “biological weapons are being worked on in the US and Israel not by just any experts, but (under) the leadership of usually Jewish psychopaths”.

The commentary appeared first as the leading front-page article in the March 25 edition of Glos Polski, a weekly newspaper based in Toronto that claims to be read by Poles “around the globe.”

B’nai B’rith Canada says it has called on police to investigate the newspaper story as a hate crime, alleging it’s a blatant violation of the law.