Why Are Anti-Israel Activists So Afraid of The...
McGill Tribune Publishes Op-Ed Calling for a Boycott...
Ontario Arabic Paper’s Editor Downplays Holocaust; Meshwar Describes...
How the War in Ukraine is Having a...
Toronto Star Columnist Shree Paradkar Wrongly Claims IHRA...
After Vancouver Adopts IHRA, CBC Radio Interviews Fringe...
Qatar Prepares For The 2022 World Cup: Will...
Lawfare: Who is Using the Law More Effectively?...
Official Publication of the College of Physicians and...
French Rapper Accused of Antisemitism; HRC Comments on...
Home Daily Brief PM Gives Canadian Journalists a Lesson on Double Standards

In a candid and refreshing article, Sun Media Bureau Chief David Akin conceded that Prime Minister Harper made a “reasonable point” when he remarked to journalists that: 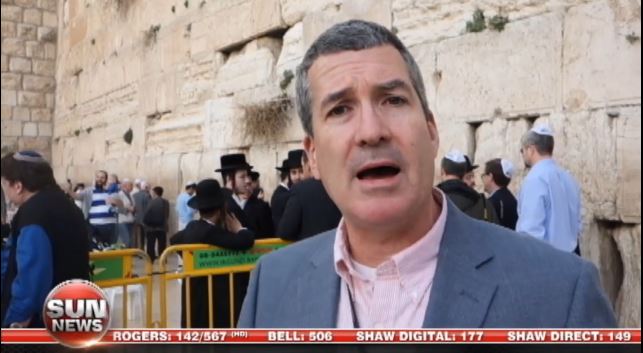 “Since August, 2005, 16,000 rockets have been fired into Israel from Hamas-controlled Gaza. The Palestinians have forever — long before Jewish settlements in the West Bank started going up — rejected Israel’s right to exist.

Why didn’t we ask what Abbas was doing to improve governance in his territory? What about the accountability of Abbas and the Palestinians? Canadian reporters had two chances to ask Abbas a question — in Ramallah, of all places — and instead of asking him why the Palestinians will not acknowledge Israel’s right to exist, we wanted Harper to explain why the Jewish settlements were illegal.”

Yesterday, HRC contacted Mr. Akin regarding a news report which he authored entitled “Harper’s Doctrine” as well as an article for QMI agency which appeared in various newspapers in Quebec and was accompanied by a headline asserting that “Harper says criticizing Israel is anti-Semitic”. This report appeared on Canoe, Le Journal de Montreal, Journal de Quebec, and 24 Heures.

Unfortunately, the claim that “Harper says criticizing Israel is anti-Semitic” contained a serious misrepresentation of Prime Minister Harper’s remarks. In his speech to the Knesset, the prime minister explicitly stated:

“ No state is beyond legitimate questioning or criticism”.  He also said: “Of course, criticism of Israeli government policy is not in and of itself necessarily anti-Semitic”. Rather, what Harper deemed to be anti-Semitic is the singling out of Israel among countries of the world for selective condemnation and opprobrium:

“But what else can we call criticism that selectively condemns only the Jewish state and effectively denies its right to defend itself, while systematically ignoring – or excusing – the violence and oppression all around it?

What else can we call it when Israel is routinely targeted at the United Nations?

And when Israel remains the only country to be the subject of a permanent agenda item at the regular sessions of its Human Rights Council?”

The singling out of Israel for condemnation is included in the definition of anti-Semitism as set out in the Ottawa Protocols, of which Canada is a signatory. The protocol, drawn up by international parliamentarians in a series of conferences, specifically distinguished between criticism of Israel, anti-semitism and indicated where the two overlap.

“The criticism of Israel similar to that levelled against any other country cannot be anti-Semitic,” the protocol states. “But singling Israel out for selective condemnation and opprobrium – let alone denying its right to exist or seeking its destruction – is discriminatory and hateful, and not saying so is dishonest.”

The same principles were adopted by the European Union which proposed its own working definition of anti-Semitism along the same lines  This definition was repeated by the Prime Minister in his speech to the Knesset.

We are awaiting a response from Mr. Akin.