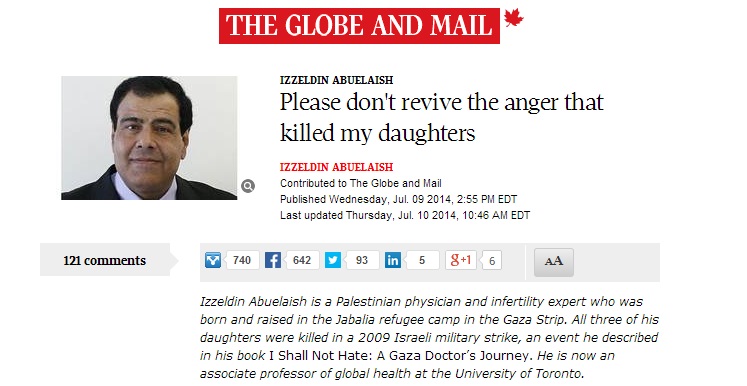 Dr. Izzeldin Abuelaish is a Palestinian physician and infertility expert now based in Toronto, but who was born and raised in the Jabalia refugee camp in the Gaza Strip. He first caught international attention during the Gaza War of 2008-09 and was a regular source for foreign and domestic journalists, especially the Israeli media.

Tragedy struck his family during hostilities between the IDF and Palestinian terrorists when an Israeli tank accidentally fired a shell at his apartment killing three of his daughters and his niece – Bessan, Mayar, Aya and Noor. Under such circumstances, most people would resort to hating the perpetrators, but Dr. Abuelaish instead ardently advocated peace, non-violence, and co-existence between Israelis and Palestinians. His critically acclaimed book is called “I Shall Not Hate” and he was nominated for the Nobel Peace Prize for his work in promoting peace between Palestinians and Israelis.

With the aforementioned in mind, we were dismayed that someone of Abuelaish’s caliber and stature, would claim in a Globe and Mail op-ed that Israel was committing a “human genocide” against Palestinian “women and children”.

Writing in the Globe and Mail on July 10, Abuelaish said: “There have been hundreds of strikes recently by Israel, with more than 50 innocent people killed and 500 severely wounded. Gaza Strip is being bombarded. It is war against women and children, who constitute 70 per cent of the Gaza Strip population; it’s human genocide.”

To claim that Israel is practicing “genocide” against Palestinians, meaning that Israel intentionally is trying to wipe all Palestinians off the map, whether men, women or children is beyond hateful and baseless. This bellicose rhetoric has only served to inflame tensions.

Abuelaish also claims it’s up to the Israelis to “… admit its failure to end the conflict by military means. The way is to end occupation”. But what of Hamas, who in recent days has fired over 500 rockets at innocent Israeli civilians and whose charter calls for Israel’s destruction? Amazingly, Dr. Abuelaish doesn’t once refer to Israel’s opponent in these hostilities and implies that Israel occupies Gaza, even though it disengaged all 8,500 settlers and its combined armed forces from the territory.

How anti-Israel groups are hijacking progressive causes, with...