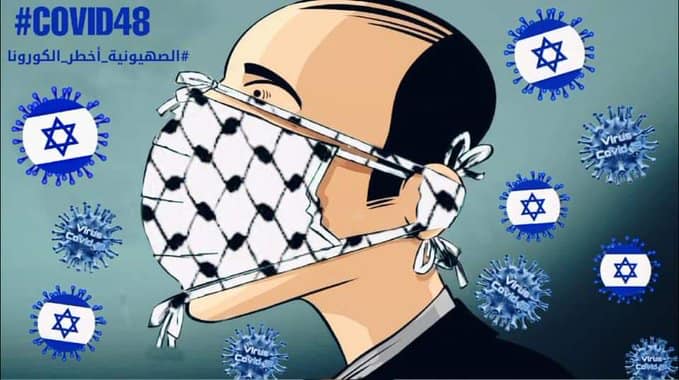 An example of a campaign going on in Palestinian social media using the hashtag #Covid48 where Jews and Israel is blamed for the Coronavirus.

The P.E.I. Guardian published four more lengthy letters which countered Richard Deaton’s antisemitic polemic blaming Israel for the Coronavirus’ spread, and two letters which applauded the antisemitic letter, one by Judy Haiven, a member of the fringe anti-Israel group Independent Jewish Voices (IJV) who repeated the antisemitic trope that Israel is to blame for the Coronavirus’ spread to Palestinians, who falsely claimed that Israel has denied medicines to Gaza, and who wrongly said that Israel occupies the Gaza Strip. 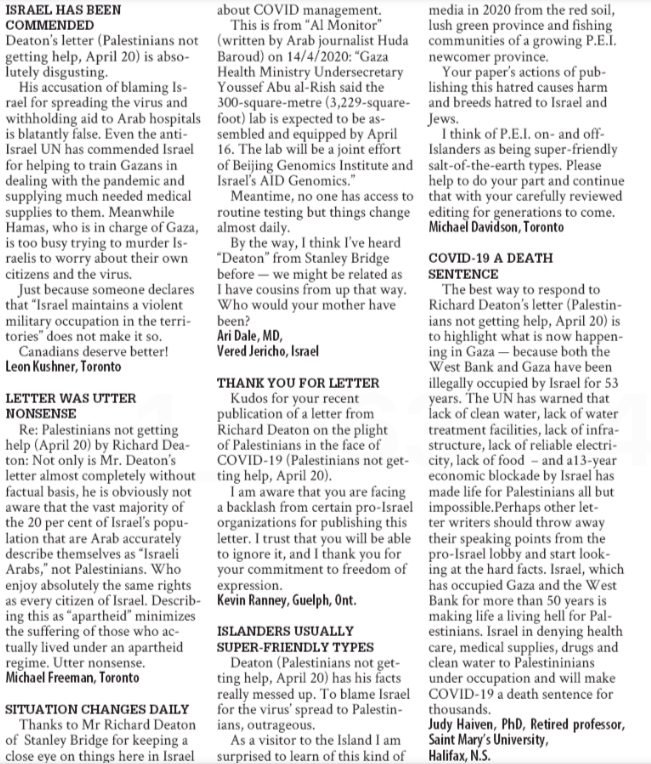 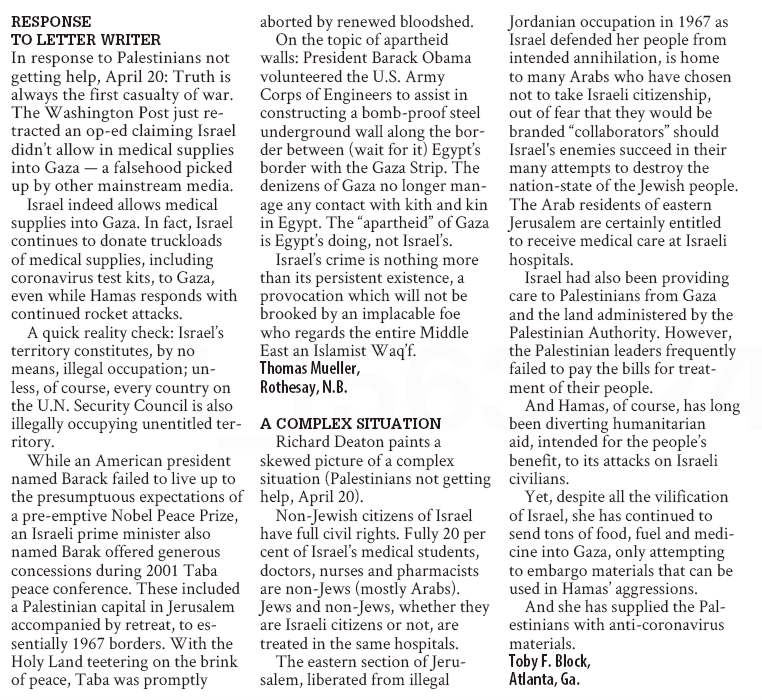 See the Jerusalem Post’s coverage today of HRC’s alert regarding a newspaper in Atlantic Canada which published a letter claiming that Israel is to blame for the spread of the Coronavirus among Palestinians. 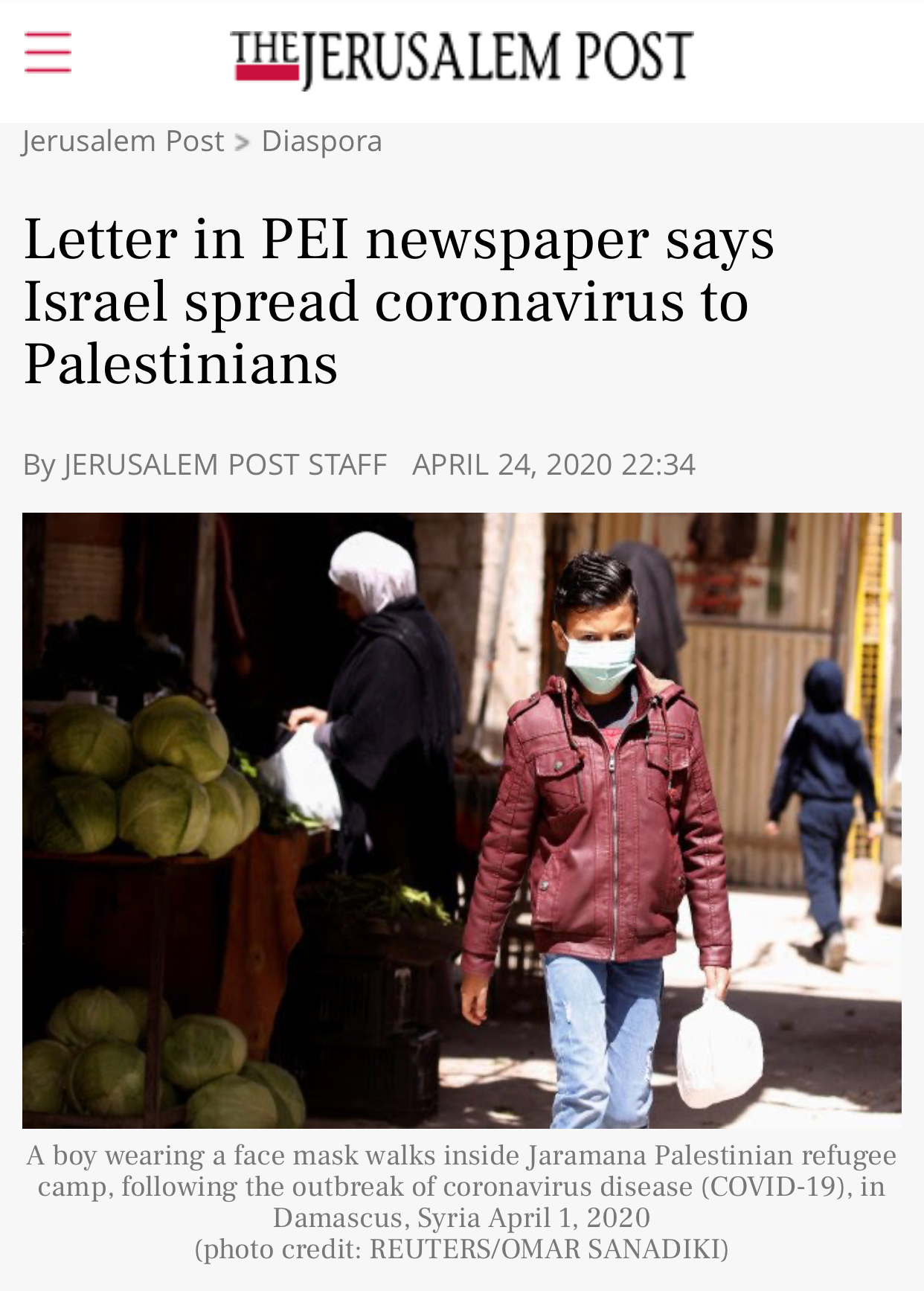 Kudos to HonestReporting Canada’s intrepid letter writers for contacting the P.E.I. Guardian en masse and for expressing your displeasure with the paper for publishing this antisemitic letter. Two such letters were published in the April 25 edition: 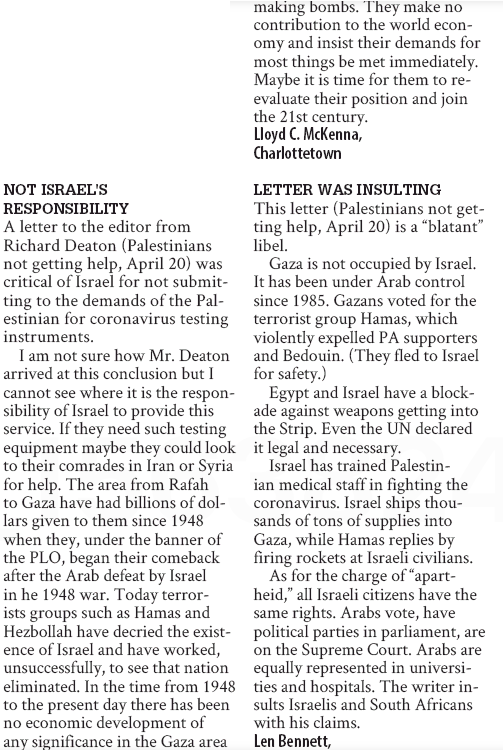 Since time immemorial, the virus of antisemitism has spread in times of great conflict, poverty, natural disasters and indeed, worldwide pandemics.

The COVID-19 outbreak has been no exception. In its path of death, destruction and illness, the malady of Jew hatred has gone viral with hatemongers attempting to scapegoat world Jewry by linking the Jews and the Jewish state to the virus’ existence and spread or for claiming that the Jewish people fabricated the disease entirely.

As acclaimed New York Times op-ed writer and editor Bari Weiss observed in her book: “How to Fight Antisemitism”: “In the 1300’s, the real culprit of the bubonic plague, which swept through Europe and killed tens of millions of people, were rats that had come to the continent via ship from Crimea. But Jews were blamed for spreading the disease by poisoning drinking wells.”

Fast forward to present day, this age-old discrimination has found fertile ground in bigots worldwide and those based domestically seeking to spread antisemitism, a disease without a cure and whose contagion cannot be stymied by social distancing and efforts to bend the curve. The rise of antisemitic hatred during COVID-19 led Ahmed Shaheed, the United Nations special rapporteur on freedom of religion or belief, to say he’s “Extremely concerned to see that certain religious leaders and politicians continue to exploit the challenging times during this pandemic to spread hatred against Jews and other minorities.”

True to form, Stanley Bridge resident and anti-Israel activist Richard Deaton used the COVID-19 pandemic and The Guardian as a platform to incite hatred against Israel and Jews. Deaton took to the pages of the Guardian on April 20 (see his letter in full at right) to blame Israel for the virus’ spread to Palestinians, outrageously claiming that Israel imposed a “death sentence for thousands of Palestinians” and has therefore committed “crimes against humanity”. His letter was also published to the Saltwire.com and Journal Pioneer’s website.

Deaton also claimed that Israel has been occupying all of Jerusalem ostensibly since Israel declared its independence in 1948, which is equivalent to claiming that the world’s only Jewish state and a sovereign UN member country, has no right to exist. For Deaton to outrageously imply that the birth of the Israeli state in 1948 was a historical mistake in need of rectification, he’s engaging in the disease known as antisemitism.

What Deaton did not mention was that tiny Israel has been regarded as the safest country in the world to live in now due to the drastic efforts its undertaken to fight the pandemic’s spread. Also ignored was how the pandemic has actually resulted in unprecedented cooperation between Israeli and Palestinian officials, to the point that even the anti-Israel United Nations praised their efforts to contain the epidemic.

As The Times of Israel reported: “Dozens of doctors, nurses and medical personnel in Gaza have been trained by Israeli teams in techniques to treat patients infected with the coronavirus… A training session was conducted for several hours for around 20 medical staff from Gaza at the Erez Border Crossing by a team from the Sheba Medical Center in Ramat Gan. In addition, a group was allowed to leave Gaza for training at the Barzilai Medical Center in Ashkelon and medical staff from both sides have held conference calls together, according to the report.”

As well, contrary to Deaton’s bold lies and outright falsehoods, COGAT (Coordination of Government Activities in the Territories) has delivered hundreds of testing kits into Gaza, along with over 20 tons of disinfectants to maintain hygiene and sanitation in the West Bank and 15 ventilators to Ramallah.

While all populations worldwide are at risk of the Coronavirus’s spread, the fact that the Gaza Strip’s health-care system is woefully under-resourced leaves only Hamas to blame. The terror organization that runs Gaza has failed to provide basic health care and to fund necessary medical infrastructure, training and to hire trained practitioners, instead using humanitarian aid and Palestinian tax dollars towards waging a terror war against Israeli civilians in the form of terror tunnels, rockets, weapons, and paying salaries to terrorists.

Importantly, while Israel and Egypt’s security blockade of Gaza is in place to prevent and thwart terror attacks, all kinds of food, medicines, and humanitarian goods continue to be transported to Gaza, week in and week out. Furthermore, Israel continues to allow any Palestinian to cross into Israel for medical treatment or for humanitarian grounds so long as they have the required permits.

As of this writing, Israel has 14,498 cases of Coronavirus and has tragically lost 189 lives. Israel has no reason to apologize for every effort it has undertaken to safeguard its populace. Instead, Israel should be applauded for being on the vanguard in preventing the virus’ spread and Israeli industries should be thanked for donating over 6 million hydroxychloroquine tablets as a potential treatment for COVID-19.

While we hope and pray for a speedy return to normalcy post pandemic, we remain resolute in our steadfast opposition to the antisemitsm that has taken root here in Canada and that serves to infect the minds and target Jews with baseless hatred.

Take action now: The Guardian has to take responsibility for electing to publish Richard Deaton’s hateful antisemitic screed which blamed Israel for the Coronavirus’ spread and for exposing the Jewish community to unwarranted discrimination and contempt. Send letters to: letters@theguardian.pe.ca.