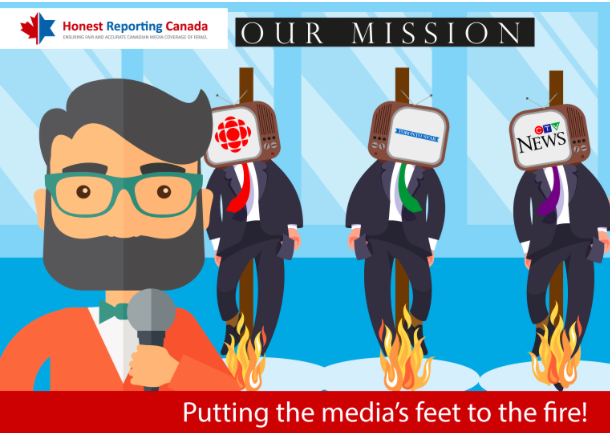 Israel is in the midst of a battle for public opinion – waged primarily via the media. To ensure Israel is represented fairly and accurately “‘HonestReporting'” monitors the media, exposes cases of bias, promotes balance, and effects change through education and action.

When media bias occurs, our worldwide base of subscribers take action by contacting news agencies, drawing issues of bias to their attention, and requesting changes. Media outlets, correspondents, and editors are now held accountable for biased reporting and are becoming more aware of the need for factual, impartial and fair reporting. Our subscribers also make use of our Communiqués to bolster their own knowledge and understanding of the often complex issues.

The work of HonestReporting Canada (HRC) yields results. Since 2003, HRC has prompted hundreds of apologies, retractions, and revisions from news outlets. These efforts are changing the face of the media and reporting of Israel throughout the world.

As an organization dedicated to defending Israel against prejudice in the media, we aim to provide educational tools and resources to anyone wishing to advocate for Israel. Our materials provide people with information that is helpful when responding to the media, in their dealings on campus or in the work place, and in any other sphere where having credible, considered background material is of value.

Why is the struggle for media fairness so important? The media sways public opinion, which directly affects foreign policy towards Israel and in turn the lives of her citizens. One person alone may not impact this struggle, but thousands united can!