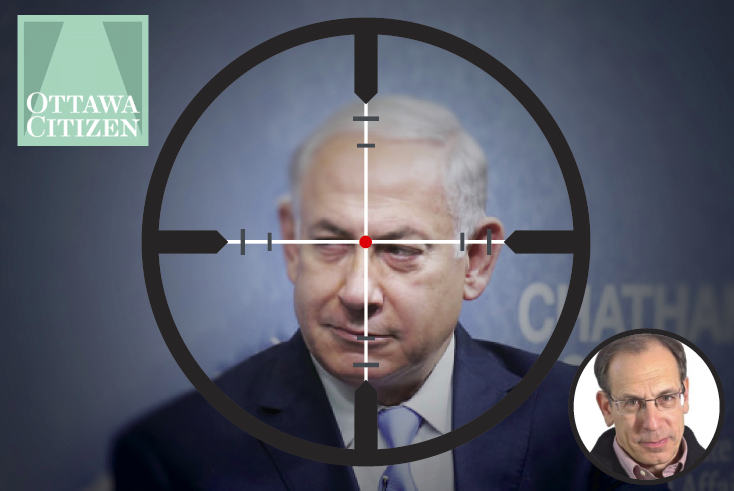 There’s an important line separating legitimate opinion that enhances the public discourse, from vapid rhetoric that interferes with constructive dialogue.

On March 7, the Ottawa Citizen published a commentary by journalist, professor and author Andrew Cohen entitled: “Netanyahu and Trump, twins of political disaster”. 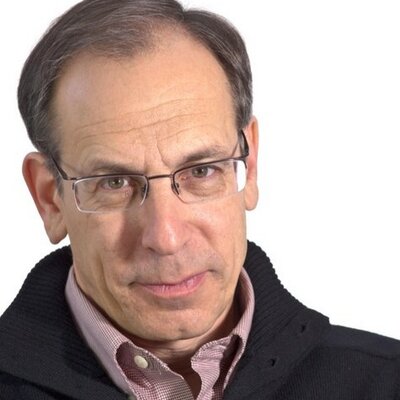 While Cohen (pictured right) is certainly entitled to his own opinions, we question the editorial judgement of the Ottawa Citizen for publishing this commentary as it was devoid of substance and serious argumentation and was replete with gratuitous name calling, smears and insults, largely directed at Israeli Prime Minister Benjamin Netanyahu.

Accordingly, the Citizen is as much deserving of criticism as Cohen is of contempt. Surely a news organization has to uphold some basic journalistic standards?

Cohen is clearly not a fan of U.S. President Donald Trump or the Israeli Prime Minister. That’s his prerogative, of course.

Here’s how he describes Netanyahu in the prominent pages of the Citizen:


Cohen criticizes Trump’s decision last December to recognize Jerusalem as the capital of Israel, and to move the United States embassy there from Tel Aviv. In a previous Citizen column on February 13, Cohen asserted that this effort “… is opposed by many, possibly most, Canadian Jews.” To wit, can Cohen substantiate this claim? Of course, even opinions have to be grounded in facts. 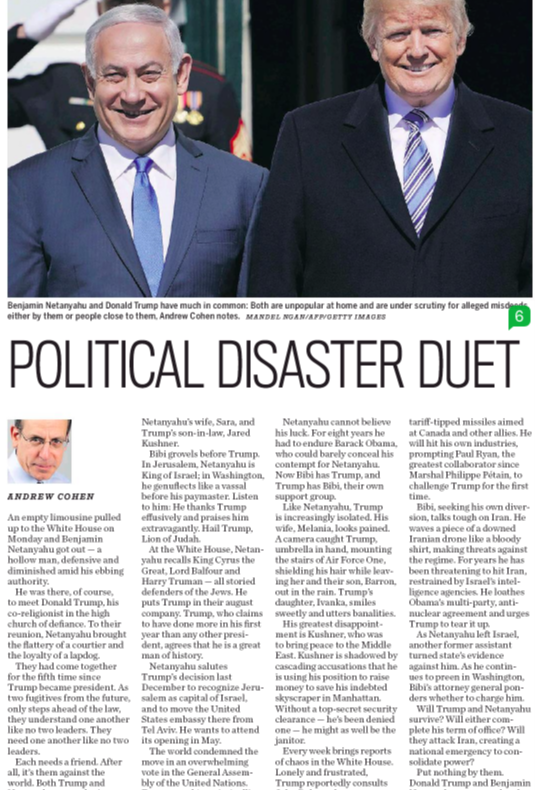 Untold by Cohen is that this policy would simply be recognizing reality and the facts on the ground. Jerusalem functions as the capital of Israel and has done so, since the time of the State of Israel’s first Prime Minister, David Ben-Gurion. This fact seems to be obscured in the debate on its status. It’s Jerusalem that’s the home of the President of the State, the Prime Minister, the Knesset, the legislative branch of the Israeli Government and the Supreme Court. It’s also the headquarters of many different Israeli ministries that are charged with running the country. The State of Israel has never ceased to declare Jerusalem to be its eternal capital and every sovereign country has the right to designate its own capital.

It seems that for Cohen, Netanyahu is presumed guilty, not innocent, of the corruption accusations being leveled against him domestically. Cohen acts as judge, jury and executioner. Whether Netanyahu’s guilty or not, Mr. Cohen fails to mention that the Israeli prime minister strenuously disputes all the charges against him. For Cohen though, Netanyahu is a “fugitive”, someone who has escaped a place or is in hiding to avoid arrest or persecution.

In concluding his polemic, Cohen claims that it’s Netanyahu who is “making threats against the (Iranian) regime.” Cohen claims that “He (Netanyahu) loathes Obama’s multi-party, anti-nuclear agreement and urges Trump to tear it up.” Of course, that’s not true. In fact, Netanyahu has said that the Iran nuclear deal should be changed to eliminate provisions removing restrictions on Tehran’s atomic program over time or it should be cancelled, as he said, “fix it or nix it”.

Cohen outrageously asserts: “Will they (Israel and America) attack Iran, creating a national emergency to consolidate power?… Put nothing by them.” To claim that Netanyahu would launch an attack on Iran, thereby putting the lives of Israeli and Iranian civilians at risk solely to maintain power in the face of corruption investigations, is beyond the pale. In fact, it’s only Iran that has been uttering threats and showing its intentions to wipe Israel off the map.

By publishing Cohen’s empty diatribe, the Ottawa Citizen’s reputation and credibility has suffered. So much for responsible journalism at the Citizen.