In a letter published in the Ottawa Citizen on January 28, only one day after International Holocaust Remembrance Day, letter writer Michael Price outrageously claimed Israel carried out a genocide of Palestinians akin to the Nazis systematic murder of 6 million Jews. See the letter appended below. In so doing, Mr. Price trumped up libelous claims that Jews – who were once the victims of the Nazis in the Holocaust – then became the victimizers carrying out a genocide of Palestinians. There’s no foundation to this inflammatory claim. It should be noted that comparisons of contemporary Israeli policy and actions to that of the Nazis fits the European Union’s, U.S. State Department’s and Canada’s Ottawa Protocol’s working definition of antisemitism.

As Deborah Lipstadt, professor of Modern Jewish and Holocaust Studies at the Institute for Jewish Studies at Emory University noted, comparing “Jews to Nazis is not only ill-informed, it demonstrates a certain prejudice – antisemitism – which will never help resolve the situation. Whatever one thinks of Israeli policy, to describe it as akin to the Nazi policy of murdering all of European Jewry is to engage in antisemitism and a form of Holocaust denial.”

Commentaries like Mr. Price’s only serve to fan the flames of hatred against Jews and are not worthy of publication by a respected newspaper like the Ottawa Citizen. 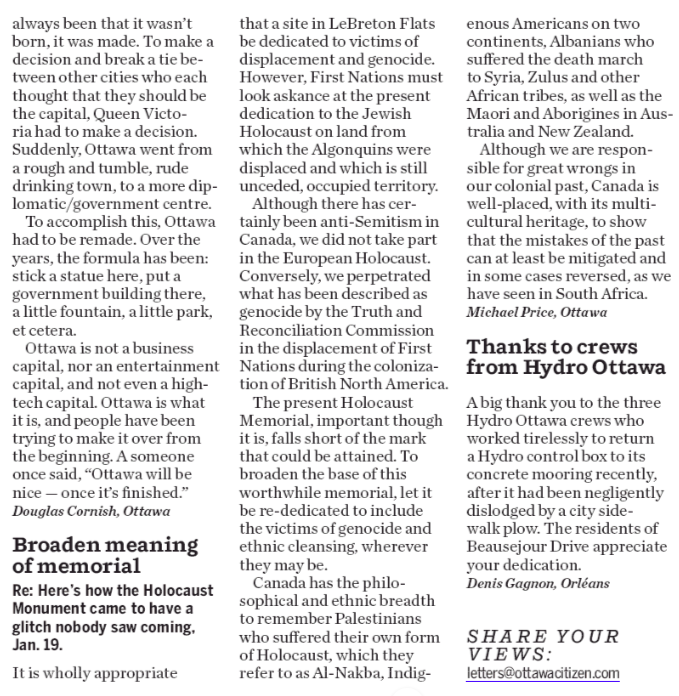