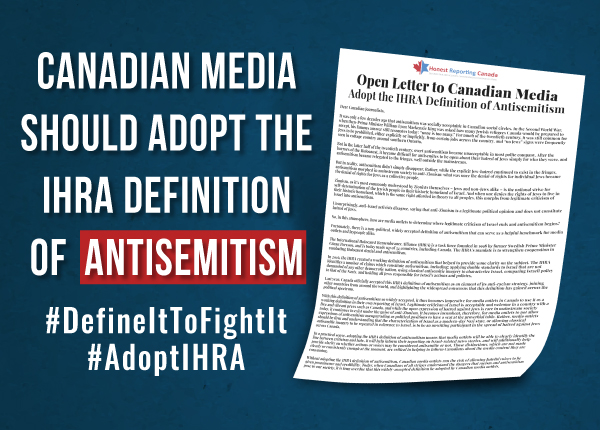 On the heels of the important AdoptIHRA campaign, where 140 NGO’s from around the world urged Facebook to adopt the International Holocaust Remembrance Alliance (IHRA) working definition of antisemitism, HonestReporting Canada issued this open letter calling on Canadian media outlets to adopt this internationally recognized definition of antisemitism.

It’s imperative that the Canadian media adopt the IHRA definition now, especially at a time when antisemitic incidents have reached near historic levels and Jews remain the most targeted minority group in Canada. Without a recognized definition for the term, there’s no way for various stakeholders (journalists, school administrators, police, union representatives, judges, etc.) to identify instances of Jew-hatred and enforce laws and policies to counter the scourge of antisemitism.

IHRA’s membership consists of nearly 40 member countries including Canada, the U.S., U.K., Germany, France, etc. each of whom “recognizes that international political coordination is imperative to strengthen the moral commitment of societies and to combat growing Holocaust denial and antisemitism.”

Today’s antisemites deny Israel’s right to exist, reject Jewish self-determination in our historic homeland and employs Holocaust denial and revisionism, while subjecting the Jewish people and Jewish state to demonization, double standards and delegitimization. That’s why it’s imperative for the media to know how to identify antisemitism and its many manifestations in order to know how to combat it, and to not give it an undue platform.

It was only a few decades ago that antisemitism was socially acceptable in Canadian social circles. In the Second World War, when then-Prime Minister William Lyon Mackenzie King was asked how many Jewish refugees Canada would be prepared to accept, his famous answer still resonates today: “none is too many.” For much of the twentieth century, it was still common for Jews to be prohibited, either explicitly or implicitly, from certain jobs across the country, and “no Jews allowed” signs were frequently seen in cottage country around southern Ontario.

But in the latter half of the twentieth century, overt antisemitism became unacceptable in most polite company. After the horrors of the Holocaust, it became difficult for antisemites to be open about their hatred of Jews simply for who they were, and antisemitism became relegated to the fringes, well outside the mainstream. 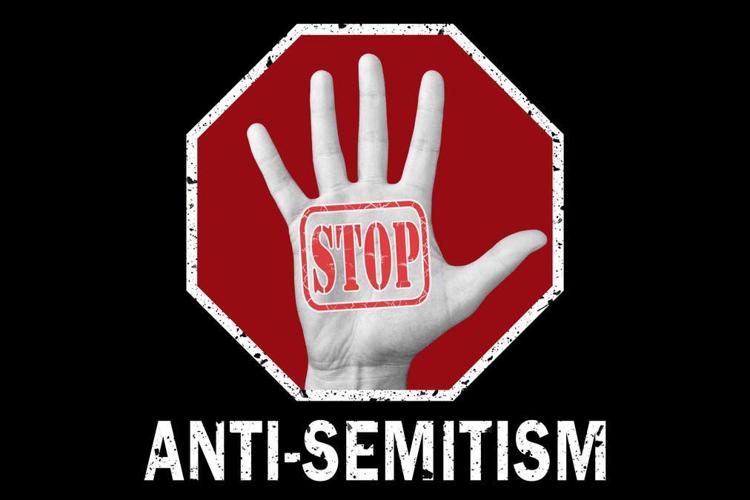 Zionism, as it’s most commonly understood by Zionists themselves – Jews and non-Jews alike – is the national strive for self-determination of the Jewish people to live in their historic homeland of Israel. And when one denies this right to Jews, which is the same right afforded in theory to all peoples, this morphs from legitimate criticism of Israel into antisemitism.

Unsurprisingly, anti-Israel activists disagree, saying that anti-Zionism is a legitimate political opinion and does not constitute hatred of Jews.

So, in this atmosphere, how are media outlets to determine where legitimate criticism of Israel ends and antisemitism begins?

Fortunately, there is a non-political, widely accepted definition of antisemitism that can serve as a helpful benchmark for media outlets and laypeople alike.

The International Holocaust Remembrance Alliance (IHRA) is a task force founded in 1998 by former Swedish Prime Minister Göran Persson, and is today made up of 34 countries, including Canada. The IHRA’s mandate is to strengthen cooperation in combating Holocaust denial and antisemitism.

In 2016, the IHRA created a working definition of antisemitism that helped to provide some clarity on the subject. The IHRA identifies a number of claims which constitute antisemitism, including: applying double standards to Israel that are not demanded of any other democratic nation, using classical antisemitic imagery to characterize Israel, comparing Israeli policy to that of the Nazis, and holding all Jews responsible for Israel’s actions and policies.

Last year, Canada officially accepted this IHRA definition of antisemitism as an element of its anti-racism strategy, joining other countries from around the world, and highlighting the widespread consensus that this definition has gained across the political spectrum.

With this definition of antisemitism so widely accepted, it thus becomes imperative for media outlets in Canada to use it as a working definition in their own reporting of Israel. Legitimate criticism of Israel is acceptable and welcome in a country with a free and vibrant press such as Canada, and while the open expression of hatred against Jews is rare in mainstream society today, it continues to exist under the guise of anti-Zionism. It becomes incumbent, therefore, for media outlets to not allow expressions of antisemitism masquerading as political positions to have a seat at the proverbial table. Rather, media outlets should be firm and understanding that the characterization of Israel as a modern-day Nazi state, or allowing classical antisemitic imagery to be repeated in reference to Israel, is to be an unwitting participant in the spread of hatred against Jews across Canada.

In a practical sense, adopting the IHRA definition of antisemitism means that media outlets will be able to clearly identify the line between criticism and hate, it will help inform their reporting on Israel-related news stories, and will additionally help provide clarity on whether actions or voices may be considered antisemitic or not. Those distinctions, which are not made clearly or consistently enough at the moment, are critical in helping to inform Canadians about the media content they are consuming.