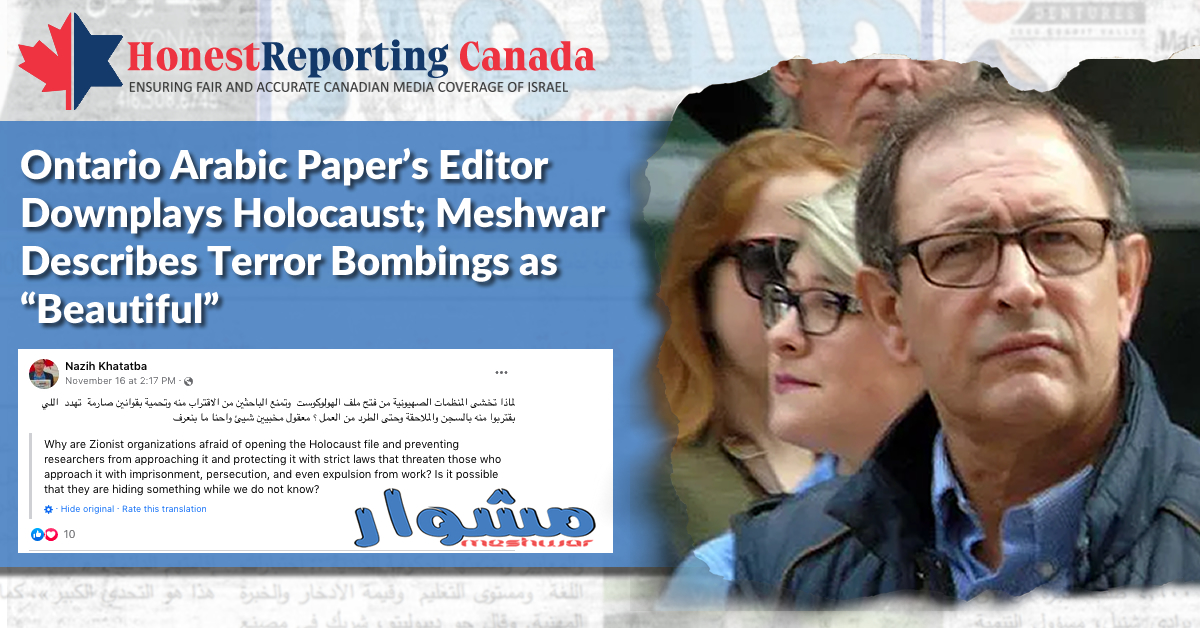 Canada recently made Holocaust denial illegal in the Criminal Code in an effort to stop hatemongers from denying and downplaying the Holocaust, that saw the systematic murder of six million Jews by the Nazis.

On November 16, Nazih Khatatba, Editor-in-Chief of the antisemitic and anti-Israel Mississauga-based Arabic-language publication Meshwar, wrote the following on his Facebook page:

“Why are the Zionist organizations afraid of opening the Holocaust file, preventing researchers from approaching it, and protecting it with strict laws that threaten those who come near it with imprisonment, prosecution, and even dismissal from work? Is it possible that they are hiding something, and we do not know?”

The Holocaust is the most documented genocide in history, with open and accessible archives that have been digitized for ease of research. No one is hiding anything.

Whether these comments amount to “willful promotion of antisemitism,” is a matter to be determined by relevant Canadian authorities who seek to enforce Criminal Code provisions related to Holocaust denial.

Meanwhile, on November 23, a Meshwar article described past terror bombing attacks that have murdered and maimed innocent Israeli civilians as “beautiful,” saying that the twin bombing attacks that killed 16-year-old Canadian-Israeli Aryeh Shechopek, was a “another qualitative operation, which upended all the security balances of the occupation, its army, and its intelligence services…”

HonestReporting Canada has independently verified the translation of Meshwar’s words from the original Arabic and they are as follows:

“The occupation entity woke up this Wednesday morning to It brought back the time of the “beautiful” bombing operations after a long hiatus and made the “occupation state” enter another unenviable tunnel in light of warnings that “the Palestinian anger is not over yet.”

Meshwar Media and its editor, Nazih Khatatba, deserve to be named and shamed for its toxic antisemitic and hateful anti-Israel content and investigated by relevant authorities to determine if his comments constituted Holocaust denial.