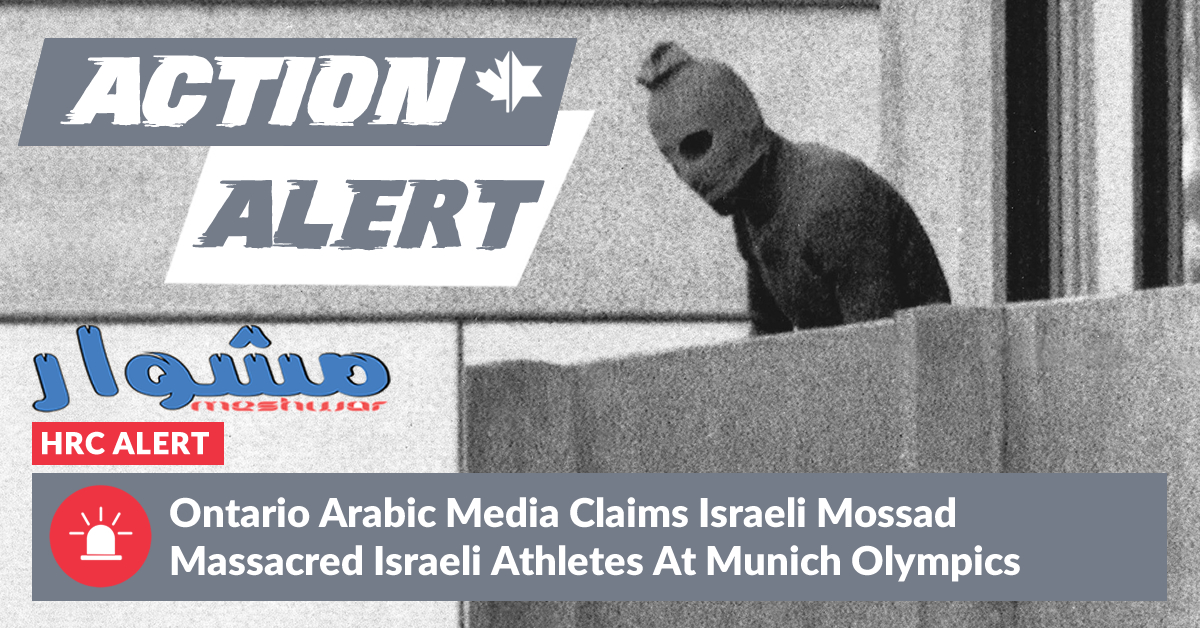 On top of monitoring Canada’s media in both of our nation’s official languages, English and French, HonestReporting Canada also scrutinizes Canadian Arabic-language news for its reporting and commentary that engages in antisemitism and anti-Israel activism.

In recent weeks, we’ve exposed and condemned Mississauga-based Arabic news outlet Meshwar, whose editor uttered the antisemitic dual loyalties slur, and the paper itself for peddling antisemitic propaganda and for featuring a column that called for Israel’s destruction.

This hateful trend continued on August 18, when Meshwar Media published an article on its website by Editor Nazih Khattaba which claimed that the Israeli Mossad carried out the massacre of 11 Israeli athletes at the Munich Olympics games in 1972.

“Those who carried out the massacre of the Israeli athletes in Munich [in 1972] were not [Palestinian] President [Mahmoud] Abbas, nor the Black September Organization [BSO – Palestinian terrorist group affiliated with Fatah movement], but the Israeli Mossad squad and the German police that stormed their place of detention. This group [BSO] wanted to swap them [Israeli athletes hostages] for the release of Palestinian prisoners in the occupation [Israel] prisons.”

Importantly, German forces exclusively carried out the rescue operation. Neither the Israeli Mossad nor Israeli troops participated in any military attempt to release the hostages and it was the Palestinian terrorists from the Black September group that killed the Israeli athletes.

Importantly, the International Holocaust Remembrance Alliance (IHRA) considers a statement as being antisemitic when: “Accusing Jews as a people of being responsible for real or imagined wrongdoing committed by a single Jewish person or group, or even for acts committed by non-Jews.”

Unfounded allegations like this have the potential to fan the flames of hatred against Canadian Jewry and the State of Israel. It’s incumbent upon Canadians from coast to coast to forcefully condemn Meshwar for making this antisemitic allegation. Please share our alert and take to social media to name and shame Meshwar for making the inflammatory, unsubstantiated and antisemitic allegation that the Israeli Mossad was responsible for the massacre of 11 Israeli athletes at the 1972 Olympic Games in Munich, Germany.