Even Palestinians Don’t Want A Boycott of Israel

Writing on the CBC News website on March 16, HonestReporting Canada Executive Director Mike Fegelman lauds Canadian parliamentarian’s for their overwhelmingly condemnation of BDS while calling out BDS activists for what they are: bigots, hate-mongers, and many who are virulent anti-Semites whose very efforts run contrary to the best interests of Palestinians.

To view HRC’s op-ed on the CBC’s website, please click here or read it as appended below: 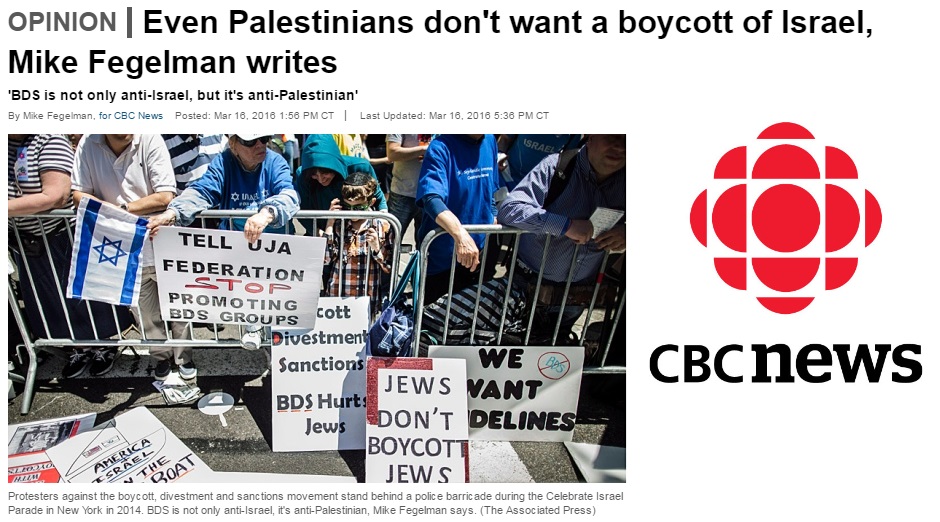 “No, we do not support the boycott of Israel.… We do not ask anyone to boycott Israel itself.… We have relations with Israel. We have mutual recognition of Israel.”

These words were uttered by none other than Palestinian President Mahmoud Abbas, whose clarion call to his domestic supporters and to Israel’s detractors abroad sought to dissuade those who would employ this tactic due to its self-defeating and counterproductive nature.

Regrettably, boycott, divestment and sanctions (BDS) advocates have not paid heed to Abbas’ call. Thinking they’re more Catholic than the Pope, BDSers believe they know what’s in the best interests for Palestinians (and Israelis).

And yet, BDS efforts against SodaStream, an Israeli company which produced some of their products in an Israeli “settlement,” is suspected of having influenced the company to shut down one of its factories. BDS campaigns saw close to 600 Palestinians who were gainfully employed at the SodaStream factory put out of a job. BDS pressure tactics cost Palestinian men and women equal-paying jobs, competitive employment benefits and generous health insurance packages.

Last year, BDS advocates revealed themselves as bigots, hate-mongers and anti-Semites when pressuring the Rototom Sunsplash reggae festival into demanding that Jewish reggae artist Matisyahu issue a statement in support of Palestinian statehood, a demand Matisyahu refused to comply with, which then saw the organizers cancel his performance. Matisyahu was the only artist at the festival asked to issue such a statement, and he was targeted simply because he is Jewish. In fact, his national origin is not even Israeli — he’s simply an American-Jewish artist, though to discriminate against him even if he were an Israeli would be bad enough, but Matisyahu was targeted simply because of his Jewish faith and because he supports the Jewish state: this was fundamentally anti-Semitic. Only after festival organizers were rebuked for their discriminatory actions did they re-invite Matisyahu to perform, which he defiantly did in front of thousands (some waving Palestinian flags), including playing his monumental hit song Jerusalem.

Boycotting Israeli products like Jaffa oranges and Dead Sea salts does nothing to help the Palestinians improve their lives, nor does it help to develop democratic institutions necessary for Palestinian statehood aspirations. BDS is not only anti-Israel, but it’s anti-Palestinian.

A couple of weeks ago, the House of Commons overwhelmingly voted by a margin of 229 to 51 to support a Conservative-initiated (and Liberal-backed) motion condemning the BDS campaign as it “promotes the demonization and delegitimization of the state of Israel.” In so doing, our parliamentarians demonstrated a commendable moral compass while affirming Canada’s longstanding friendship with Israel, the only liberal democracy in the Middle East and the world’s only Jewish state. Importantly, here in Canada, there’s an all-party consensus that affirms BDS is not only divisive, but it’s antithetical to propelling Middle East peace.

The aforementioned motion came at a time when a number of North American and European jurisdictions have taken steps to oppose BDS. “In the United States, state legislatures in New York, Pennsylvania, Florida, Alabama, Tennessee and Indiana passed anti-BDS resolutions, while the British parliament also announced a plan to enact legislation outlawing BDS. France passed such laws in 2003,” the Canadian Jewish News said.

Why are such steps necessary and even to be lauded? At its core, the BDS movement serves solely to demonize and delegitimize Israel. BDS advocates seek the annihilation of Israel through a demographic ticking bomb known as the “right of return,” which would flood Israel with millions of Palestinian “refugees,” rendering the Jewish state no longer Jewish, just another Arab-majority nation. BDS advocates call for a one-state solution and do not support the concept of two nations for two peoples.

Furthermore, BDS applies double standards by exempting pariah and human rights offending nations like Iran, North Korea, Saudi Arabia, China, Russia and the Palestinians themselves from legitimate scrutiny and criticism. BDS advocates are on the fringes of society. They don’t seek peace or conflict resolution, and BDS itself is a form of discrimination based on national origin as all Israelis are targeted for sanction.

Canada’s Ottawa Protocol dictates that “singling Israel out for selective condemnation and opprobrium — let alone denying its right to exist or seeking its destruction — is discriminatory and hateful, and not saying so is dishonest.”

As to the efficacy of BDS, even one of the most vocal anti-Israel adherents, Prof. Norman Finkelstein, has disavowed the campaign, calling it “silliness, childishness and a lot of leftist posturing. I mean we have to be honest, and I loathe the disingenuous. They don’t want Israel.… There’s a large segment of the movement that wants to eliminate Israel.”

BDS serves to normalize and mainstream anti-Semitism by using and abusing the language of human rights to isolate, stigmatize and defame Israel and its supporters. While BDS advocates demand self-determination for Palestinians, they deny agency to the Jewish people who assert their right to self-determination in their historic and ancestral homeland, Israel.

BDS doesn’t care about peace, tolerance and mutual respect. BDS encourages unilateralism, discourages dialogue and reconciliation, and its efforts have only protracted the conflict. BDS not only doesn’t recognize the existence of the state of Israel, BDS works toward Israel’s annihilation. It seeks to make Israel a pariah nation and paint it as a rogue regime whose 6 million-plus Jews must be blacklisted and slandered.

Despite being faced with calls and campaigns promoting BDS, Israel’s economy continues to experience immense economic growth, and locally, ties between Canada and Israel, whether cultural, academic or business, continue to thrive.

BDS advocates will fail in their attempt to bury the Jewish state because they don’t realize that Israelis are like resilient seeds that once planted not only grow, but flourish. After all, it was the Jews that made the desert bloom.

Mike Fegelman is the executive director of HonestReporting Canada, a non-profit organization that monitors Canadian media coverage of Israel.