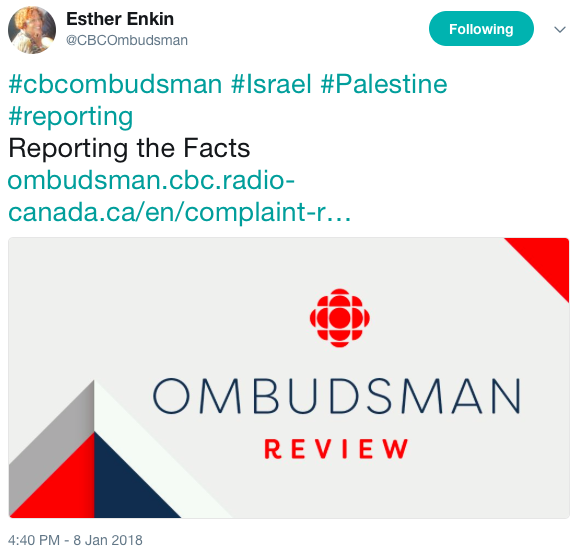 On January 3, CBC Ombudsman Esther Enkin published a review based on two HonestReporting Canada complaints which gave tacit approval for CBC editors to not prominently identify Palestinians as attackers in its news coverage.

With respect to our first grievance, we expressed our concern with the CBC’s July 30 report: “Israeli court upholds 18-month sentence for soldier’s shooting of Palestinian.” 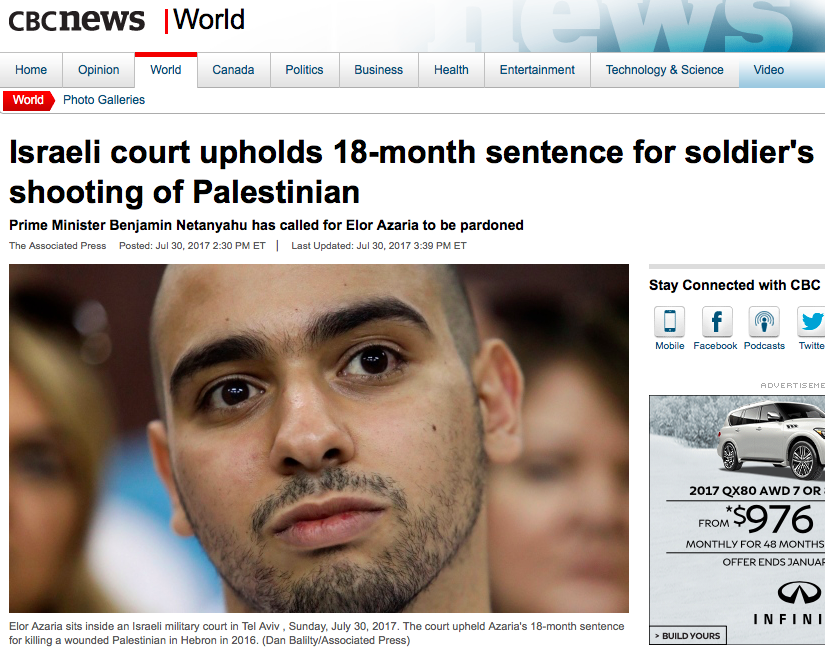 As we told the CBC, failing to mention in its headline that the dead Palestinian was an attacker or assailant, was unfair and had the potential to mislead CBC readers who only looked at the headline into thinking that an Israeli soldier killed an innocent Palestinian, whereas in fact, the dead Palestinian had attacked the solider with a knife and had wounded him. This is further compounded by the fact that readers view headlines 3:1 over the adjacent article and how social media platforms like Facebook, Twitter, etc. recirculate content using these headlines.

In prior coverage, CBC itself had several times mentioned that the dead Palestinian was an “assailant” in its reporting on the incident. 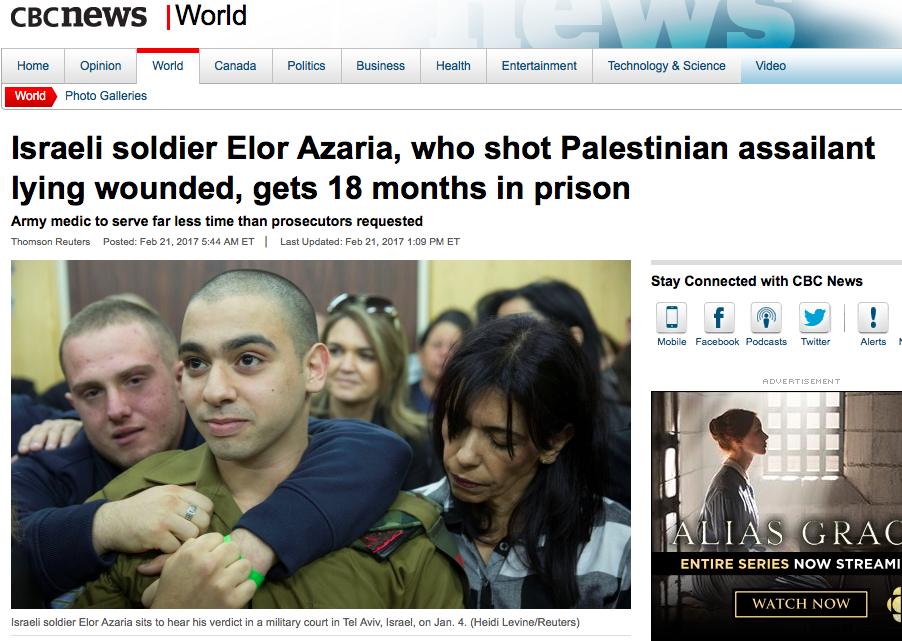 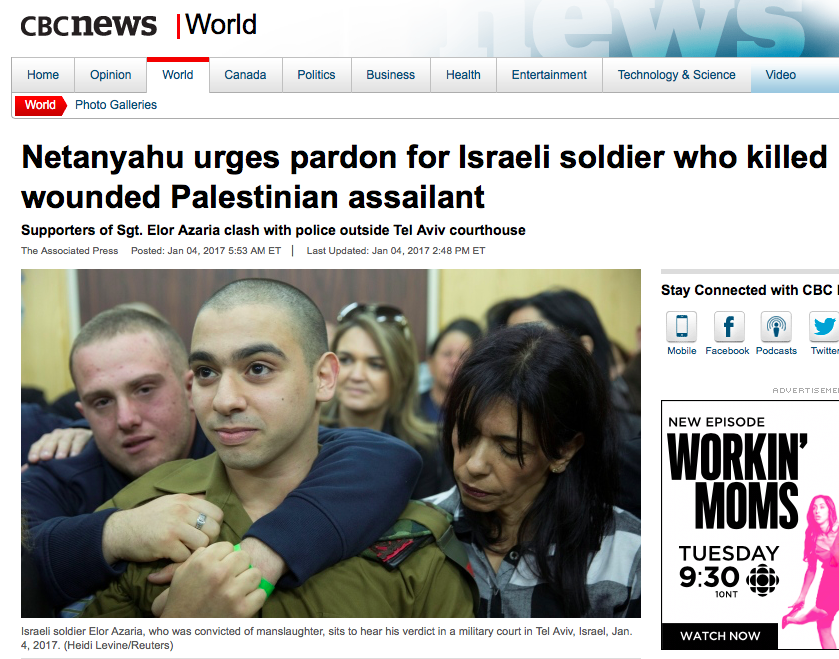 It would seem that CBC editors believed that this detail of the story was important enough to include it in its headline coverage. We argued that CBC should be consistent in its reporting on this matter and that editors should strive for precision.

Despite this, Ms. Enkin wrote that the headline was “appropriate” and defended CBC Management’s claim that CBC is “generally unable to include every detail of a story”. Enkin wrote: “It is not realistic to expect every headline to encompass the same details as every other.” In so doing, she misconstrues what we are complaining about. We didn’t ask for all the details in the headline, but only that the mention of an “assailant” should have been included. In this case, it’s absolutely necessary to mention that the Palestinian who was shot and killed was not an innocent and was an attacker.

With respect to our second complaint, we expressed our concerns about a September 16 CBC report about reconciliation efforts between Hamas and Fatah which included the following outdated and inappropriate photo and caption: 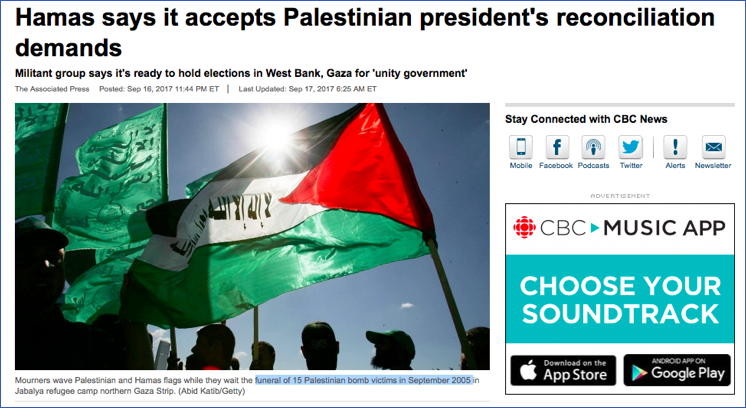 Of the thousands of photos that could have been used by the CBC for this article, we questioned the use of this 12-year-old image and its problematic caption.

Of importance, the original Getty Images caption states the following:

JABALYA REFUGEE CAMP – GAZA STRIP 24: Mourners wave Palestinian and Hamas flags while they wait the funeral of 15 Palestinian bomb victims in the Al-shuhada cemetery, September 24, 2005 in Jabalya refugee camp northern Gaza Strip. Thousands reportedly attended the funeral held for the 15 Palestinian victims killed September 23 in a car explosion during a Hamas military rally. Both Hamas and Israel are accusing each other of causing the explosion. (Photo by Abid Katib/Getty Images)”

CBS News reported at the time the following about this incident (emphasis added):

A pickup truck carrying masked Islamic militants and homemade rockets blew up at a Hamas rally Friday, killing more than a dozen Palestinians, including children, and wounding dozens more, hospital doctors and witnesses said. Witnesses told Israel’s Yedioth Internet Web site the first explosion triggered several other blasts in nearby vehicles that were also carrying rockets and ammunition. Estimates of the number of dead ranged from seven to 19. Hamas blamed an Israeli helicopter, but the Israeli military denied involvement and the Palestinian Interior Ministry said the blast was set off by the mishandling of explosives.”

While photos and captions sometimes are stories unto themselves, however, the reality is that these 15 Palestinians died because Hamas’ rockets/ammunition prematurely exploded, so said Israel and the Palestinian Interior Ministry at the time. In light of this information, we asked the CBC to replace this photo and caption.

In her review of our complaint, Ms. Enkin claimed that the photo and caption were “appropriate” and she further had the temerity to conclude that “The cause of the explosion is irrelevant.” Despite how the potential exists for CBC readers to wrongly conclude that Israel was in some way complicit for this bombing which saw 15 Palestinian civilians killed, including children, CBC elected to not amend the caption which could have prevented its readers from being misinformed in perpetuity.

In summation, these two reviews carried out by the CBC’s Ombudsman have alarmingly only given a green light for CBC journalists to not have to prominently identify Palestinian attackers in its news coverage.

The CBC Ombudsman’s full unabridged review is as follows:

The complainant, Mike Fegelman, the Executive Director of HonestReporting Canada, made two requests for reviews. One concerned a headline dealing with the sentencing of an Israeli soldier and the other questioned the use of an old photograph for a news report. He was concerned that the story behind the photo made it inappropriate, and he questioned why such an old photo would have been chosen. Both the headline and the photo were appropriate, and there was no violation of policy.

As you requested reviews at the same time regarding two different news stories published on cbcnews.ca, I will deal with both of them in this review. You have filed these complaints in your capacity as Executive Director of HonestReporting Canada.

The first one was a complaint about the headline in a story noting that an Israeli court upheld the sentence of a soldier convicted of shooting a Palestinian assailant who lay injured on the ground: “Israeli court upholds 18-month sentence for soldier’s shooting of Palestinian.” You said the headline should have referred to the Palestinian as an “attacker”, as is noted in the first paragraph of the story. You pointed out that in other CBC reports the word “assailant” was used in the headlines, and that CBC should be consistent and “strive for accuracy.” You asked that the headline be amended.

Your second concern was the use of an old photograph used to illustrate a story published in September 2017. It accompanied a report entitled “Hamas says it accepts Palestinian president’s reconciliation demands.” The photo, depicting people flying Palestinian and Hamas flags, was actually taken in 2005 at a funeral for bombing victims. They were killed when a pick-up truck carrying rockets and explosives detonated, and, according to reports at the time, killed over a dozen people. You questioned the use of a 12-year old photo to illustrate a current story. The caption on the story described it as one taken at the funeral of Palestinian bomb victims without mentioning the circumstances in which they were killed. You noted that at the time the photo was released the original information came with the photo from Getty images:

Of importance, the original Getty Images caption states the following: “JABALYA REFUGEE CAMP – GAZA STRIP 24: Mourners wave Palestinian and Hamas flags while they wait the funeral of 15 Palestinian bomb victims in the Al-shuhada cemetery, September 24, 2005 in Jabalya refugee camp northern Gaza Strip. Thousands reportedly attended the funeral held for the 15 Palestinian victims killed September 23 in a car explosion during a Hamas military rally. Both Hamas and Israel are accusing each other of causing the explosion. (Photo by Abid Katib/Getty Images)”

I know that photos and captions sometimes are stories unto themselves, but the reality is that these 15 Palestinians died because Hamas’ homemade rockets/ammunition prematurely exploded, so said Israel and the Palestinian Interior Ministry at the time.

You said using the image in this context was “outdated and inappropriate.”

Jack Nagler, the Director for Journalistic Accountability and Engagement, replied to your first complaint. He told you the headline was not inaccurate, and noted, as you did, the information about the Palestinian soldier shot was in the first paragraph of the story. He explained that headlines are “generally unable to include every detail of a story.” He added that the headline would not be changed.

He also replied to your second concern regarding the photograph. He explained there is always a preference to use photos generated from the event being covered, but when they are not available, editors turn to stock photographs. He explained why this image was chosen from the database:

The caption as written is accurate and makes no mention of who caused the bombing as it is not relevant for this particular story.

While there is no specific policy regarding headlines, the general rules of clarity and accuracy apply. Headlines will always present a challenge, especially ones written for contentious and highly scrutinized subject matter such as coverage of the Middle East and the Israeli-Palestinian conflict.

It is not realistic to expect every headline to encompass the same details as every other. Earlier stories used the qualifier “assailant” – this one did not – but as both you and Mr. Nagler noted, it is in the very first paragraph:

An Israeli military court on Sunday upheld the 18-month sentence of a soldier convicted of fatally shooting a Palestinian attacker who lay on the ground wounded after stabbing and wounding another soldier, in a case that divided a country where military service is mandatory for most people.

This is well within acceptable journalistic practice – there is no inaccuracy and the relevant details are concisely provided in the lede of the story. There was no violation of policy.

As to your second concern, the CBC News staff properly identified the provenance of this photo – that it was taken many years ago at a different event. That is appropriate and necessary. This is what appears in the story:

I appreciate that you would be aware of the backstory to this event, and the counterclaims of responsibility at the time. Had the story, or even the photo addressed that issue, then of course it would have to be dealt with in some way. The photo was chosen because it is a strong image illustrating this story – a report of reconciliation between Hamas and the Fatah movement, led by Palestinian President Mahmoud Abbas. The text under the photo accurately described where it was taken and what was going on. The language is neutral and provides the information necessary to place it in time and location. The cause of the explosion is irrelevant. The image is what would catch the eye, and for the average reader, it is highly unlikely it would evoke the original story or the competing claims around it. There is no violation of policy.