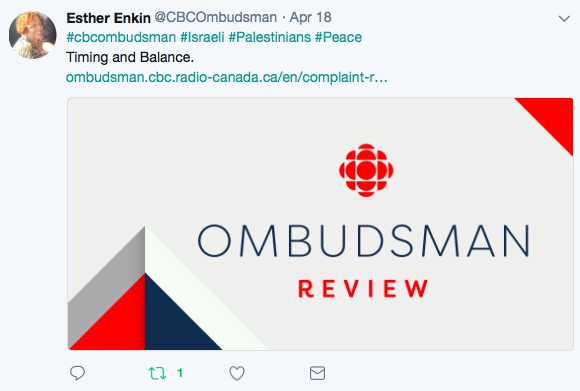 On April 18, CBC Ombudsman Esther Enkin released a review at the behest of HonestReporting Canada subscriber David Levy which found that The Current’s February 7 broadcast (which HRC critiqued as having demonized Israel) fundamentally “lacked balance” and “fell short” of the CBC’s Journalistic Standards and Practices.

As we noted in our original alert:

Entitled, “A generation born into conflict: Young lsraelis and Palestinians speak about the path to peace,” veteran CBC Anchor Anna-Maria Tremonti introduced the program by casting the Israeli-Palestinian divide in perilous terms and then by interviewing four individuals, all of whom hold extreme anti-Israel positions and who effectively singled Israel out for opprobrium and exclusive censure, all the while holding the Jewish state to a unique standard – unlike other nations of the world.

The program misleadingly presented itself as fair and balanced by featuring two Palestinians and two Israelis on the show, however, all these individuals were extremely hostile to Israel and none represented a mainstream Israeli perspective, nor was there a real exploration of Israel’s security concerns, its painful concessions and many generous peace offers.” 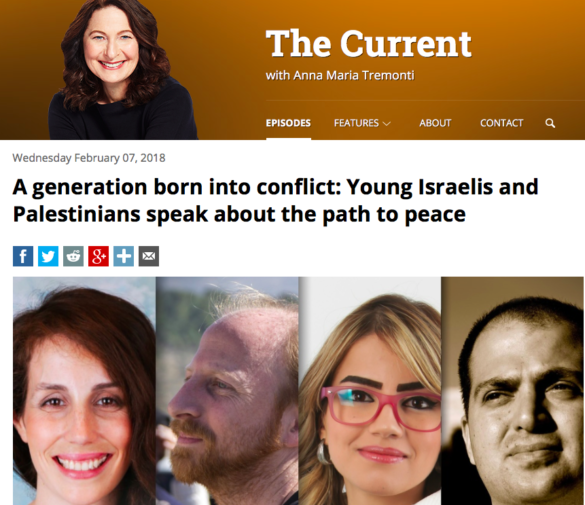 The CBC’s Ombud said that The Current and Host Anna-Maria Tremonti “did not convey an accurate reflection of the reality on the Israeli side and required balance.”

The Current ran a panel with two Israelis and two Palestinians to gauge the views of people under 35 regarding the peace process. While they were all critical of their respective governments, they were all equally critical of Israel and Israeli policies. The complainant, David Levy, said it was biased and served to “demonize” Israel. The panel lacked balance, but the programmers provided other perspectives shortly thereafter. In this case, the panel did not reflect the reality of public opinion and fell short, even though journalistic policy allows for balance over a reasonable period of time.”

The CBC Ombudsman’s full review entitled: “Timing and Balance” can be found appended below.

HonestReporting Canada thanks Ombudsman Enkin for carrying out this review and we congratulate all our subscribers who complained en masse to the CBC. Special thank you to David Levy for initiating this review! In so doing, our concerns have been validated. This CBC Radio program produced content which demonized Israel, which was one-sided and which lacked balance. We hope that our role in holding this program and our public broadcaster to account, will prevent future journalistic transgressions and media bias against Israel from the CBC.

You objected to a segment broadcast on The Current this past February entitled: “A generation born into conflict: young Israelis and Palestinians speak about the path to peace.”

The programme host, Anna-Maria Tremonti, spoke with two Israelis and two Palestinians under the age of 35. The conversation was introduced as an exploration of their attitudes and ideas about the peace process. You said this was one more example of The Current’s “hostility” to the State of Israel and that all four of the interviewees were extremely critical of Israel and sought to “demonize” it. You said the segment was slanted and there was no voice present which supported or spoke positively about Israel.

Lynda Shorten, the Manager in charge of The Current, replied to your concerns. She explained that the purpose of the panel “was intended to be a conversation among four young people who have grown up under conflict their whole lives.” She added it was a way to get their thoughts on the peace process and to get a picture of their daily lives, particularly looking at whether they mixed across religion, nationality and outlook. She explained the choice of guests:

We selected our guests, including two Jewish and two Palestinian youth, as a way to achieve both political, as well as gender and geographical, balance in the conversation. 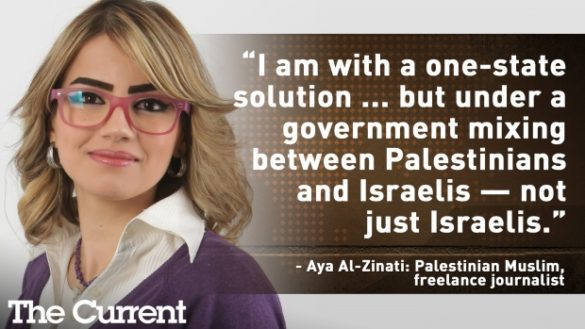 She noted that Ms. Tremonti informed listeners the show producers had reached out to other groups, including Likud Youth, but were unable to secure other interviewees. She also noted that while the guests all were critical of the present Israeli government’s policies, the Palestinians were also critical of their own leadership.

She told you the programmers realized, after the broadcast, that there was a missing perspective. To that end, they read comments critical of the discussion on the programme the next day. On February 12 they aired an interview with Asaf Romirowsky, whom she described as “an academic who has worked as a liaison for the Israeli government in the past” and who emphasized the level of support for the Israeli government and presented some of its views. She reminded you that CBC journalistic policy allows for balance over time and she felt this was achieved through the airing of audience reaction and this interview.

CBC Journalistic Standards and Practices describes balance in this way:

We contribute to informed debate on issues that matter to Canadians by reflecting a diversity of opinion. Our content on all platforms presents a wide range of subject matter and views.

On issues of controversy, we ensure that divergent views are reflected respectfully, taking into account their relevance to the debate and how widely held these views are. We also ensure that they are represented over a reasonable period of time.

The policy does not indicate what a reasonable period of time is; it is generally understood that the more controversial the subject, the shorter the time frame. Some stories are revisited frequently, and it is in this iterative process that balance and accuracy are mostly achieved.

The other important consideration is relevance and how widely-held views are. In other words, the representation of views should reflect their prevalence.

It is around this matter that the panel of four young people runs into some difficulty. The piece began with short excerpts from the Palestinian and Israeli leadership – Mahmoud Abbas, Yasser Arafat and several Israeli prime ministers, including Benjamin Netanyahu:

For a new generation of Israelis and Palestinians, those are some of the only leaders they’ve seen steering the politics of the region. And the arguments and obstacles on both sides have been playing out their entire lives. The guests you are about to hear were children and teenagers when the Mideast Peace Process—or processes—began in the early 1990s. A world of barriers, checkpoints, suicide bombings, military attacks, and political fights is all they’ve known.

The panel discussion centred around four people who feel disaffected and critical of their leadership. It would appear that was the purpose and focus of it. It is true, as Ms. Shorten noted, both the Israelis and the Palestinians were critical of their respective leaderships – in that way, there was balance. However, the episode set out to examine the attitudes of an under-35 generation, but left out the perspective of what a later broadcast referred to as a “majority of Israelis.” There is an acknowledgement of this gap in the postscript to the panel. Ms. Tremonti said:

We know there are other perspectives on the issues we’ve been discussing today and we’re interested in hearing them. We did also reach out to the Likud Youth Party to see if one of their members would like to join our discussion but we did not hear back. 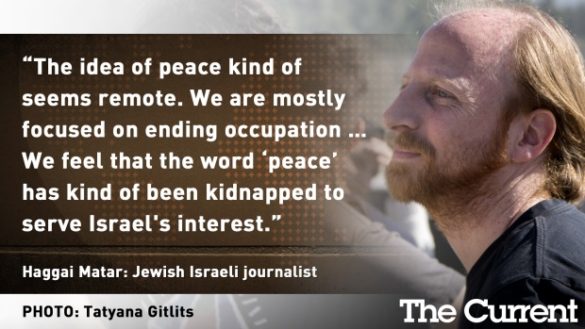 Programmers are frequently faced with a dilemma. If after due diligence they are unable to find an appropriate spokesperson, they must decide whether to abandon the segment or find other ways to achieve balance. Each one is a judgment call. The danger of cancellation is that one faction or group holding a particular view can have a de facto veto on coverage of a topic. In this case, the decision was made to go with the panel, and then provide balance. While it was interesting and valid to hear from those who feel disaffected with their leadership, it did not convey an accurate reflection of the reality on the Israeli side and required balance.

The Executive Producer affirmed that programmers realized they had not achieved appropriate balance and included listener feedback on the broadcast the next day. Five days later, Ms. Tremonti interviewed a spokesperson who explained the perspective of those young Israelis who support the government and its policies, and gave alternative views of its policies to those expressed in the panel. The interview began with an excerpt from one of the panelists stating that he was not in the majority of young Israelis in his view. Ms. Tremonti then introduced Asaf Romirowsky and explored the current political landscape and the reason for the support:

A 2016 poll of young Israelis found most do support the right-wing Likud government. So to continue the conversation today I’m joined by Asaf Romirowsky. He is a dual US-Israeli citizen, a former Israel Defense Forces International Relations liaison officer to the West Bank and to the Hashemite Kingdom of Jordan. He is currently the executive director of Scholars for Peace in the Middle East. And we reached him in Philadelphia, Pennsylvania.

It would have been preferable, given the level of support for the government and the strong negative views of the panelists, that this perspective had been presented on the same episode as the panel. However, the effort to right the balance was made within a reasonable period of time.