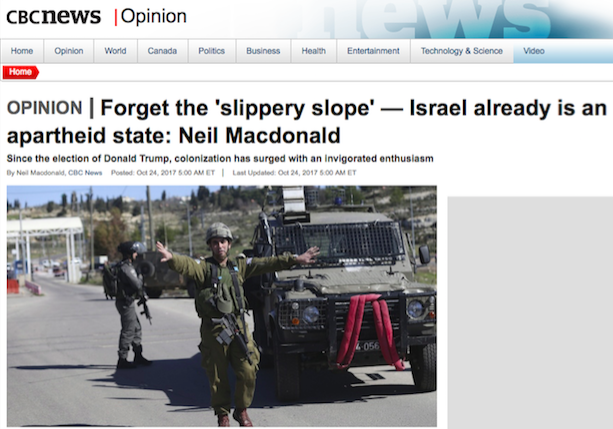 In a review released on November 30 and posted to the CBC Ombudsman’s website, Ombud Esther Enkin wrote that:

The complainant, Terry Specter, objected to an Opinion piece by Neil Macdonald in which he labelled Israel an apartheid state. She rejected the characterization and questioned Mr. Macdonald’s claims that statements from former Prime Ministers and high-ranking officials substantiated his claim. This was a provocative column but it did not violate CBC journalistic policy.”

HonestReporting Canada filed a complaint with CBC executives noting that Macdonald’s commentary crossed the line and was misleading, lacked context and was replete with errors. Our complaint is contextualized in our November 3 media action alert entiteld: “Neil Macdonald’s Apartheid Slur is Inflammatory and Unfounded”.

“You took issue with an opinion column published on CBC’s news website entitled “Forget the ‘slippery slope’, Israel already is an apartheid state.” You disputed Mr. Macdonald’s claim that various former Israeli leaders have labelled the country an apartheid state. You said the people he cited were actually saying the opposite…”

“You were one of many who wrote to complain about this column. Most pointed out, as you did, that those cited in support of Mr. Macdonald did not label Israel an apartheid state, but warned it could become one in the absence of the creation of two states at the end of the peace process. Others took exception to his characterization of the settlements on the West Bank, and, like you, questioned the notion of a Palestinian state, because it has “never been a state.”

Importantly, Enkin observed (emphasis added): “You and other complainants pointed out that the Israeli politicians cited do not declare Israel an apartheid state, but rather warn that it is headed in that direction. You are correct. It may have been clearer but Mr. Macdonald actually acknowledged that fact (emphasis added):

The time has come to call the duck a duck. It’s time to agree with a long list of Israeli political leaders, academics and public figures on both the political left and right, including three former prime ministers, a winner of the Israel prize, two former heads of the Israeli internal security service Shin Bet, and one of the country’s principal newspapers, all of whom have warned that the Jewish state is becoming, or already is, an apartheid state. I would choose the latter characterization.” 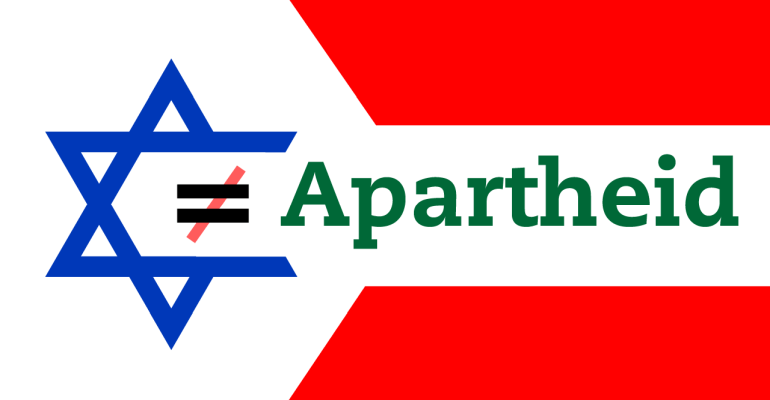 Enkin wrote (emphasis added): “It is he who declared that this was the reality on the ground. It is his analysis of the current situation and his assessment that there is little hope of a peace settlement. That is his personal view, and it is expressed in an opinion column. I have no doubt there will be other occasions to solicit other opinions and analyses as developments around the peace process occur.”

In short, Enkin implicitly acknowledged that there’s no foundation to Macdonald’s claiming that a long list of Israeli political leaders, academics and public figures, all of whom, have warned that the Jewish state already is an apartheid state. Enkin merely claims that these are simply Macdonald’s viewpoints, not theirs!

Enkin also noted that CBC’s publication of a rebuttal column by CIJA entitled “You can’t analyze Israel without understanding the experiences of its people,” was consistent with CBC policy on ensuring a balance of views on controversial topics.

As you pointed out, Israel is a democracy which enshrines free speech. As Mr. Macdonald pointed out, the argument about the shape of the future and the treatment of Palestinians is robust and open there. Canada too is a democracy with rights of free speech. I recognize that you strongly object to this characterization of Israel, and reject it entirely. That does not mean that there is no room for strongly-held views, as long as there is balance to provide other interpretations. You raise the issue of anti-Semitism. I recognize there are times when criticism of the state of Israel and its policies are a surrogate for anti-Semitic positions. This is not one of them. It is also true that one can be highly critical of the government and its policies, as are many Israelis and that it does not arise from anti-Semitism.”

Time and again, CBC has refused to address Neil Macdonald’s historical animus towards Israel. Whether as a reporter, or now, as a columnist, Macdonald’s modus operandi has served to demonize and stigmatize Israel, to tarnish the Jewish state’s hard-fought reputation and to malign its standing in the community of nations. Our public broadcaster is abdicating its responsibility to Canadians by failing to deal with this matter.”