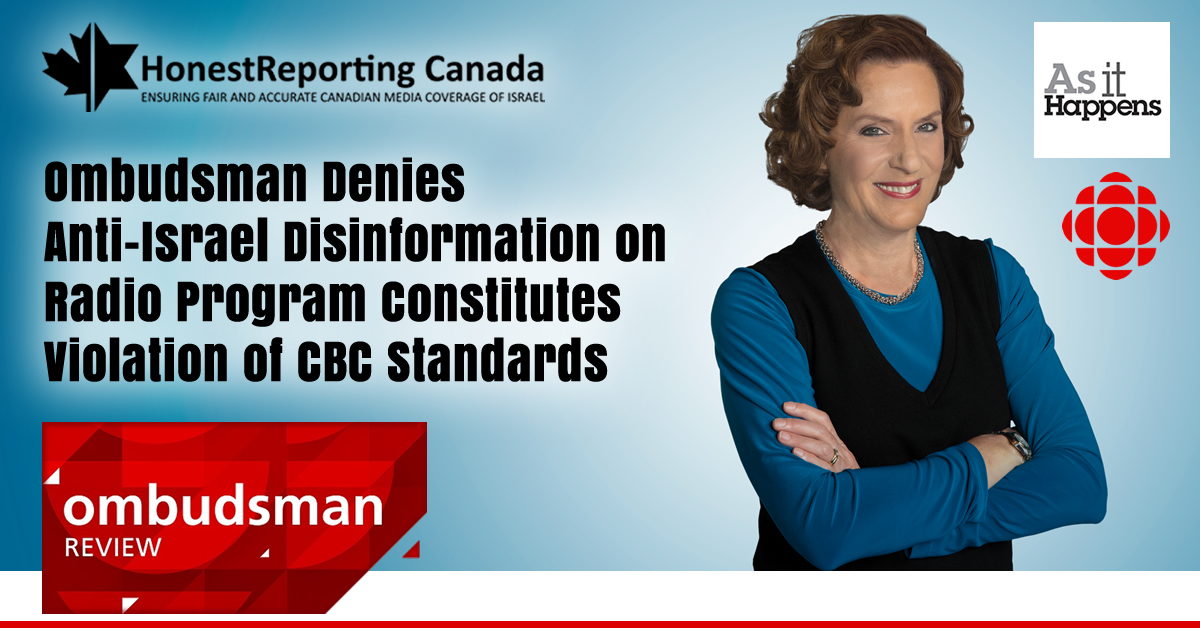 CBC Ombudsman Jack Nagler has denied that two of Carol Off’s radio interviews in May 2021, covering the war between Hamas and Israel on her former program, As it Happens, constituted a violation of CBC Journalistic Standards and Practices.

The complaint made by HonestReporting Canada subscriber Murray Teitel, took Carol Off to task for two radio interviews on May 14 and May 25, 2021.

In the first broadcast on May 14, Off interviewed a Palestinian woman in Gaza named Rima Aburahma, who made repeated false statements, including that Israel does not allow any building materials into Gaza in order for bomb shelters to be constructed, that Israel was targeting homes where only children were present, and that Israel was “killing people and taking over our land.”

In his review, which can be read in full by clicking here, CBC Ombudsman Nagler wrote that “a radio guest making a claim is not the equivalent of CBC making a claim,” and that “the bar for me to find a violation of journalistic standards based on something the radio guest says is pretty high. The falsity of the statement needs to be incontrovertible, and the significance of the falsehood needs to be incontrovertibly high.”

Nagler wrote that while the interview subjects may have made claims which were objectionable to many, she was, in one instance for example, “was entitled to describe her reaction.”

Unfortunately, in the eyes of HonestReporting Canada, this is an insufficient defense. According to CBC’s journalistic standards, “In the case of comments made by a person expressing an honest opinion, we ensure that the opinion is grounded in facts bearing on a matter of public interest.”

The claim that Israel prevents the entry of building materials into Gaza may be a sincerely held belief by this Palestinian woman, but it is nevertheless demonstrably false. CBC points out that Israel has (temporarily) restricted cement imports in the past to Gaza, which is true, but this is hardly the same as an outright ban, as claimed by the interviewee. Israel only restricts dual-use materials that could be repurposed into weapons like rockets.

The claims around Israel targeting homes with only children present, and that the Jewish State was “killing people and taking over our land” are even more egregious.

This is problematic, first because, as pointed out by Teitel in his complaint, under Gaza’s oppressive Hamas regime, the lack of free expression means one can never truly express their free opinion, and secondly, personal opinion notwithstanding, these claims are certainly incontrovertibly false. There is simply zero evidence that Israel purposefully targets innocent civilians, nor is it indiscriminately murdering Palestinians and stealing land.

In the second broadcast on May 25, Off interviewed a Palestinian man, Refaat Alareer, who made the same unfounded statements about Israel’s allegedly “deliberate attack.”

In his complaint to CBC, Teitel pointed out that this Palestinian man’s Twitter account shows well over 100 instances of anti-Israel content specifically comparing Israel to Nazi Germany. The Executive Producer of As It Happens, Robyn Smythe, was quoted in Nagler’s report saying “she had not been aware of them” prior to the complaint being made and that it would be “unreasonable” to do an examination of Alareer’s entire social media history.

This is a surprising defence for two reasons. Firstly, if Teitel was able to discover these Twitter posts, then it would seem that CBC would certainly be able to do so as well. Secondly, and far more problematically, comparing Israelis to Nazis is not just a claim based on falsehoods, but it is bona fide antisemitism.

According to the International Holocaust Remembrance Alliance’s (IHRA) Definition of Antisemitism, adopted by Canada, antisemitism can also include “Drawing comparisons of contemporary Israeli policy to that of the Nazis.”

While the IHRA definition does not constitute binding policy, it is a stark reminder that drawing a parallel between Israelis and Nazis is more than simply false; it is outright defamatory, and indeed an incitement to hate. It is therefore very surprising and problematic that CBC ostensibly does not deem these statements problematic, nor disqualifying for a prospective interview guest to have made.

CBC defends its interviews by saying that “The program has the right to interview whomever it wants” and that “the behaviour of a guest before or after the interview is their own responsibility.”

While it is certainly true that people are responsible for their own words, in our view, CBC failed to uphold its journalistic practices by allowing such overt disinformation to be broadcast on its radio program. As Canada’s publicly funded broadcaster, it must do better in future.