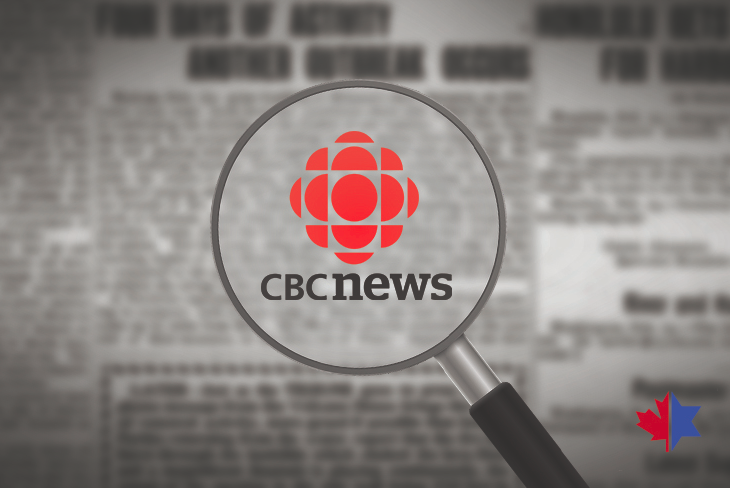 In a review published yesterday entitled “Managing opinion”, CBC Ombudsman Esther Enkin found that CBC’s newly-minted opinion section stood in violation of CBC policy for not having featured a broad range of views on highly contentious topics about Israel. Ms. Enkin “strongly urge(s) CBC management to find other columnists to write about this contentious topic.”

You can read the full review at the CBC’s website by clicking here, or it can be found in full appended below.

A summary of the review is as follows: “The complainant, Alex Kogan, objected to Neil Macdonald’s strong defense of the position taken by the Canadian Journalists for Free Expression. The organization was protesting the shooting of a Palestinian journalist during the confrontations at the Israel-Gaza border. He thought the opinion writer left out facts and distorted the truth. The article itself did not violate CBC journalistic policy, but there continues to be an imbalance in the range of views available in the Opinion section on this highly contentious matter – and that violates policy.” 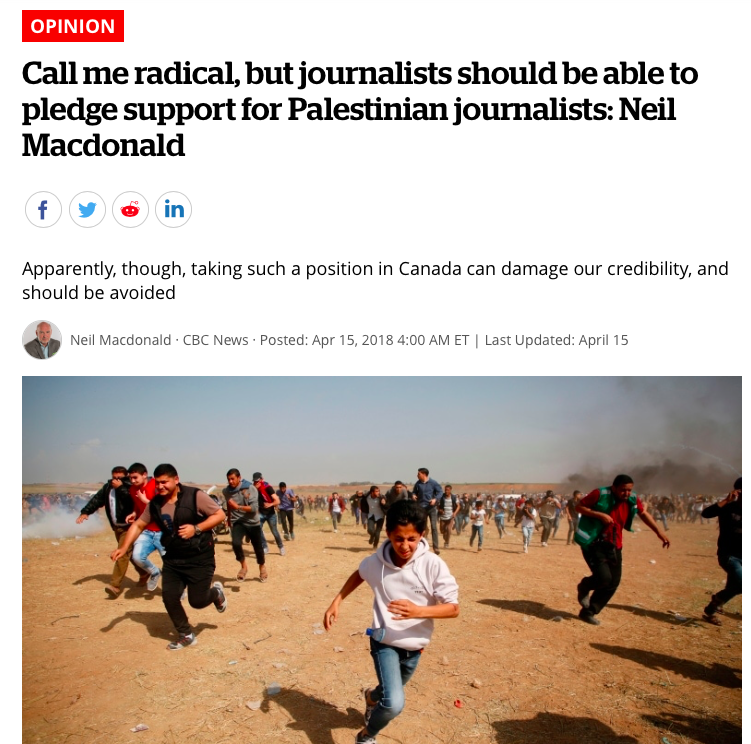 Indeed, HonestReporting Canada took note of Mr. Macdonald’s highly critical commentaries about Israel recently. Most noteworthy, his anti-Israel polemics published on CBC Opinion on May 15 and April 15. That is why HonestReporting Canada on May 17 submitted a pro-Israel op-ed to the CBC for publication on the topic of the recent violence on the Israel-Gaza border to provide an alternative perspective for the CBC’s readership.

Regretfully, CBC declined to publish it, despite our emphasizing that CBC readers need to see a different perspective on the controversial topics at hand. It’s important to keep this in mind as the lack of balance on CBC Opinion was not because commentaries hadn’t been submitted, it’s because CBC chose not to publish them.

We will continue to monitor CBC Opinion and to submit pro-Israel commentaries hoping that CBC policy is observed and to ensure that a broad marketplace of ideas on the Arab-Israeli conflict is prevalent on the CBC’s website.

The complainant, Alex Kogan, objected to Neil Macdonald’s strong defense of the position taken by the Canadian Journalists for Free Expression. The organization was protesting the shooting of a Palestinian journalist during the confrontations at the Israel-Gaza border. He thought the opinion writer left out facts and distorted the truth. The article itself did not violate CBC journalistic policy, but there continues to be an imbalance in the range of views available in the Opinion section on this highly contentious matter – and that violates policy.

You thought that a column by Neil Macdonald published on the CBC Opinion page on April 15, 2018 represented a biased point of view. You said he wanted to be “bald and deliver a brave statement,” and in so doing he fudged the truth and misrepresented facts. You thought CBC should not have given this view a platform and was tacitly endorsing it by doing so. Mr. Macdonald wrote a column commenting on a controversy which arose from a statement by CJFE, Canadian Journalists for Free Expression. The organization publicly condemned and protested the death of a Palestinian journalist who was covering the ongoing clashes between Gazans and Israeli troops near the Gaza-Israel border. The column was titled “Call me radical, but journalists should be able to pledge support for Palestinian journalists: Neil Macdonald.” In the article, Mr. Macdonald noted that the CJFE had condemned the suppression of free speech and journalism in a variety of countries, and there was no controversy. He believes that journalists have a right to speak out about “freedom of expression, and attacks on journalists.” He rejected the controversy over the CJFE’s wording in its condemnation, which referenced “extrajudicial killings” and the use of “one-sided force” against the protestors. He pointed out that the CJFE had condemned the use of force against journalists and protestors in other countries as well. Mr. Macdonald cited some of his own experience covering protests and confrontations in Israel.

You questioned the validity of many statements Mr. Macdonald made in the article as part of his analysis:

Steve Ladurantaye, Managing Editor @cbcnews, responded to your concerns. He reminded you that the article you read was opinion and clearly labelled in that way. He noted that the Opinion section is obliged to carry a range of views and perspectives on a variety of subjects, including the Middle East. He agreed with you that opinion pieces must be grounded in facts, and that this one met that criterion. He responded to the points you had raised:

CBC Journalistic Standards and Practices has specific policy on Opinion. Two aspects pertain in this context. First of all, the policy allows for CBC journalists to be assigned to write opinion. This is a recent addition to the JSP:

On an exceptional basis, the Editor in Chief may also choose to appoint certain journalists as columnists, who have licence to express their opinions. In order to protect the integrity of CBC’s journalism, we will restrict the role of such columnists to opinion and commentary, which will be clearly identified.

Mr. Macdonald has such a designation. While editorial writers generally take a position which represents the newspaper, those who write opinion for CBC’s section are more like those who write for an op-ed page – they are writing their personal views, but the page is managed by the news organization’s news staff. So, while you see the publication of this article as an endorsement by CBC news management, it is something more nuanced than that. The principle behind the use of Opinion in the JSP provides that context:

Our programs and platforms allow for the expression of a particular perspective or point of view. This content adds public understanding and debate on the issues of the day.

When presenting content (programs, program segments, or digital content) where a single opinion or point of view is featured, we ensure that a diversity of perspective is provided across a network or platform and in an appropriate time frame.

When we choose to present a single point of view:

The policy states, and Mr. Ladurantaye reiterated, that there is an obligation to present a range of views. This is reinforced in the definition of balance, which emphasizes that in matters of controversy this is critically important. The Opinion section editors are obliged to ensure over time that a range of views is present in the section. On the matter of the Middle East, they are not doing a good enough job. The policy on balance refers to a reasonable period of time, but does not define it. I looked at the last six months and I looked at Middle Eastern topics generally – not specifically the Gaza protests or the controversy around the CJFE statements. There are four – three of them are written by Mr. Macdonald. There were others about events in the region but did not directly pertain to Israel or the ongoing conflict. This does not live up to the spirit nor the letter of the policy. You refer to Mr. Macdonald’s blunt wording – it is indeed that, and a hallmark of his style. He is provocative. You take issue of much of what he said, questioning his facts. This is one more reason why it is so important to have a range of views. You mentioned he should use “pure and factual journalistic sources” when it comes to matters as controversial as the Middle East. I am hard-pressed to know what those might be. That is why there is a need for a range of views and perspectives; that is why reporting is iterative. As Bill Kovach and Tom Rosenstiel state in “The Elements of Journalism:”

The truth is a complicated and sometimes contradictory phenomenon, but if it is seen as a process over time, journalism can get at it. (p.58)

I am pretty certain whatever sources a person would cite would be those that tend to align with their own narrative and world view about an intractable and complex situation.

When Mr. Macdonald brought up the previous condemnations of regimes like Iran and Syria, his point was that there was no protest about those. He started the piece by stating:

Call me radical, but I’ve always thought there are at least two subjects on which journalists are absolutely entitled to express public opinions: freedom of expression, and attacks on journalists.

I am all for the former, and firmly against the latter. Surely we all are.

That is the equivalence he is making – that when there are attacks on the press, it is hypocritical to accept some and not others. Later in the piece he noted he did not see “organized malevolence” by the IDF toward the press.

Mr. Ladurantaye answered your other concerns in some detail. You may question the interpretation of the facts, or question what you consider critical omissions – but the facts are not wrong, despite how strongly you disagree with the conclusions drawn from them. In this instance it is fair to say that there has been a wide range of coverage on the protests at the Gaza-Israel border, the blockade by Israel and Egypt, the accusations about Mr. Murtaja’s associations and activities, and the controversy surrounding the statements made by the CJFE regarding extrajudicial killings.

There is no violation of policy in publishing this piece – the issue is the broader consideration of opinions represented in this section of the website. In that regard, it does not meet CBC standards. I strongly urge CBC management to find other columnists to write about this contentious topic.