In a recent HRC alert last month, we notified you about how our efforts prompted the CBC to amend its reporting to acknowledge that Israel denies responsibility for targeting and 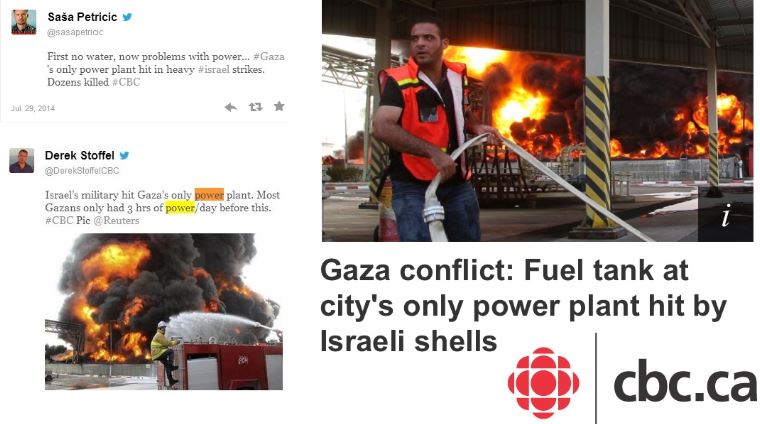 shelling a power plant in Gaza.

In an effort to further hold the CBC to account, HRC asked the CBC’s Ombudsman to review our concerns and on September 8, Ombudsman Esther Enkin upheld our concerns finding that on matters of controversy, CBC is tasked with maintaining balance and must represent both sides whenever possible. CBC’s inconsistent reporting was “not acceptable” according to Enkin.

Here is an abstract of the CBC Ombudsman’s review which is hosted on the CBC’s website for the public’s consumption:

CBC’s Journalistic Standards and Practices demands that CBC reporting be accurate and balanced. In a breaking news story, the facts and what is the complete story are not always apparent at the outset, and that is why stories are amended and rewritten over a period of time. In a war situation it is even more chaotic and difficult to get the facts. But CBC policy is clear about stating that “we will sometimes receive conflicting information from credible sources. We may choose to report this, making clear the circumstances of the situation and citing the sources while we work to reconcile the information in light of the reality on the ground.”

When the story was first published, in the early hours of July 29, the story quoted Palestinian officials stating that Israeli tank shells had shut down the territory’s only power station:

Israel on Tuesday unleashed its heaviest bombardment in a three-week-old war against Hamas, striking symbols of the militant group’s control in Gaza and firing tank shells that Palestinian officials said shut down the strip’s only power plant.

Thick black smoke from the plant’s burning fuel tank rose for hours. The station’s shutdown further disrupted the supply of electricity and water to the 1.7 million people packed into the narrow Palestinian coastal territory.

When Israeli spokespeople responded to the accusation later in the day, saying that Israeli Defense Forces had not targeted the power plant, but may have hit it accidently, the story needed to be updated. On the afternoon of July 29, on another CBC outlet, CBC News Network’s Power and Politics, a foreign ministry spokesperson gave the Israeli government response. Evan Solomon, host of the program, asked Yigal Palmor how Israel could justify hitting a power plant, since that disproportionately affected the civilian population. Mr. Palmor replied:

There is no justification and it wasn’t shelled by Israel. We have spent the whole day reviewing and checking all army operations in that area and it is very clear to us that no army operation took place anywhere near that power plant. I am unable to say what did happen, but I am able to say this: It wasn’t anything that had to do with Israeli army operations.

And as you pointed out, elsewhere an IDF spokesperson was quoted as saying that the power plant was not deliberately targeted, but may have been hit by mistake. When you pointed this out to CBC News staff, the story was amended to include Mr. Palmor’s remarks. CBC News abided by its policy on corrections; to do so as soon as they are pointed out. In this case though, they should have rewritten the story when the new information was first made available.

As for the second story on August 6, the reference to the shelling of the plant is a passing one in a much longer story. It was made in the context of a discussion of the challenges faced by Gazans trying to return to their homes:

Utility crews were working frantically to repair downed electricity and telephone lines. Gaza’s only power plant was shut down after it was badly damaged by an Israeli attack and repairs are expected to take months, leaving the densely populated strip with only two to three hours of electricity a day, via Egypt and Israel.

One of the great challenges in covering this conflict is that so many facts are in dispute, and not every story can present each position every time. So there will be lapses. Having said that, in this case, since there is still no clear answer about what happened at that plant the story should have qualified the statement.