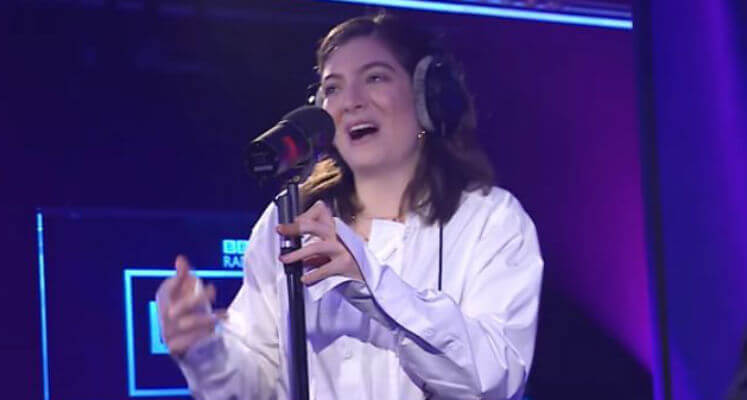 In a January 2 commentary published on IPolitics, Michael Coren criticized those who labelled New Zealand singer/songwriter Lorde, as being a “bigot” and an “anti-Semite” for her kowtowing to BDS activists by cancelling her proposed June concert in Tel Aviv.

Coren wrote that Lorde is “now being condemned by some as a bigot and an anti-Semite… There is, of course, no evidence that either grimy accusation is true…” (emphasis added).

Whether you agree or disagree with Lorde’s decision, is it fair to refer to her as a “bigot” and an anti-Semite”?

Consider this. At its core, the Boycott, Divestment, and Sanctions (BDS) movement serves solely to demonize and delegitimize Israel. BDS advocates seek the annihilation of Israel through a demographic ticking bomb known as the “right of return,” which would flood Israel with millions of Palestinian “refugees,” rendering the Jewish state no longer Jewish, just another Arab-majority nation. BDS advocates call for a one-state solution and do not support the concept of two nations for two peoples. Furthermore, BDS applies double standards by exempting pariah and human rights offending nations like Iran, North Korea, Saudi Arabia, China, Russia and the Palestinians themselves from legitimate scrutiny and criticism. BDS advocates are on the fringes of society. They don’t seek peace or conflict resolution, and BDS itself is a form of discrimination based on national origin as all Israelis are targeted for sanction.

Canada’s Ottawa Protocol on Combating Antisemitism dictates that “singling Israel out for selective condemnation and opprobrium — let alone denying its right to exist or seeking its destruction — is discriminatory and hateful, and not saying so is dishonest.”

As HonestReporting previously pointed out: “Unlike the vast majority of the western world and the majority of Israelis and Palestinians themselves, BDS does not support a two-state solution, but works toward the end of Jewish self-determination. Accordingly, their activities place themselves squarely within the definition of antisemitism adopted by the IHRA working definition of antisemitism as adopted by all 31 EU member countries, including the UK.”

BDS is abhorrent and falls outside the Canadian consensus, where the governing Liberals, opposition Conservatives, and the NDP view it as discriminatory and counterproductive to the prospects of peace. Consider the following words spoken by Palestinian President Mahmoud Abbas: “No, we do not support the boycott of Israel … We do not ask anyone to boycott Israel itself … we have relations with Israel. We have mutual recognition of Israel.” The Palestinians’ own leader views BDS as antithetical to the prospects of peace as it unfairly singles Israel out for opprobrium and doesn’t advance Palestinian interests.

BDS serves to normalize and mainstream anti-Semitism by using and abusing the language of human rights to isolate, stigmatize and defame Israel and its supporters. While BDS advocates demand self-determination for Palestinians, they deny agency to the Jewish people who assert their right to self-determination in their historic and ancestral homeland, Israel. BDS doesn’t care about peace, tolerance and mutual respect. BDS encourages unilateralism, discourages dialogue and reconciliation, and its efforts have only protracted the conflict. BDS not only doesn’t recognize the existence of the state of Israel, BDS works toward Israel’s annihilation. It seeks to make Israel a pariah nation and paint it as a rogue regime whose 6 million-plus Jews must be blacklisted and slandered.

Lorde’s support for economic sanctions against Israel unfairly assigns blame to the Jewish state and is at odds with Canadian values, as it applies differential treatment to Israel.

Don’t just take our words for granted. In fact, a couple years ago, Michael Coren himself acknowledged that BDS’ers really just want “an end to Israel’s existence”. Coren made this statement on-air while stating that he’s “one of those people who stand by Israel as well.”

In 2011, Michael Coren wondered about the BDS movement’s deafening silence over the butchery being carried out by former Libyan dictator Muammar Gaddafi. Coren wrote:

In Iran, a psychotic regime once again shot down ordinary people in the street; in Tunisia, there was gross violence and fatal shootings; and in Yemen, Jordan and Syria, political dissidents were arrested and have disappeared. Note that while some of these governments are pro-western, this cannot be said of Iran, Syria, or Libya.

“Where’s the outrage? Yet where are the massive street protests in Europe’s large cities? Where are the calls to boycott countries? Where are the labour unions demanding action? Where are the student groups using words like “apartheid” and “Nazi”? Where are the moralistic editorials condemning Arab intolerance, Islamic barbarism and the need for Arab countries to be banned from international sporting, cultural and literary events?

All of that is said about Israel, whether it engages in conflict or not. When it responds to the slaughter of its children, it is labelled a terrorist state, and when it allows its people to settle in lands that are historically Jewish, the religion of Judaism is spoken of as archaic. Retired Israeli generals travelling to London or Madrid to raise money for handicapped children are told they may be arrested on landing, Israeli athletes are promised death if they dare to appear alongside “civilized” rivals.”

In his IPolitics column, Coren argued: “As for New Zealand — the country has had three prime ministers of Jewish ancestry, one way back in the 1870s, and no history of anti-Semitism beyond the odd basement-dwelling Nazi.”

Tell that to the New Zealand Jewish Council who recently expressed their concerns at the rise of anti-Semitism in New Zealand. (For more information, click here.)

Importantly, untold by Michael Coren is that New Zealanders are clearly divided about Lorde’s decision to boycott Israel, with many critical and a majority of Kiwis being supportive of Israel.

Is Lorde an anti-Semite? Maybe and maybe not. Either way, she has most certainly aligned herself with an anti-Semitic movement.