Why Are Anti-Israel Activists So Afraid of The...
McGill Tribune Publishes Op-Ed Calling for a Boycott...
Ontario Arabic Paper’s Editor Downplays Holocaust; Meshwar Describes...
How the War in Ukraine is Having a...
Toronto Star Columnist Shree Paradkar Wrongly Claims IHRA...
After Vancouver Adopts IHRA, CBC Radio Interviews Fringe...
Qatar Prepares For The 2022 World Cup: Will...
Lawfare: Who is Using the Law More Effectively?...
Official Publication of the College of Physicians and...
French Rapper Accused of Antisemitism; HRC Comments on...
Home Media Action Alerts2022 Official Publication of the College of Physicians and Surgeons of Ontario Gives Extensive Coverage to the Threat of Contemporary Antisemitism 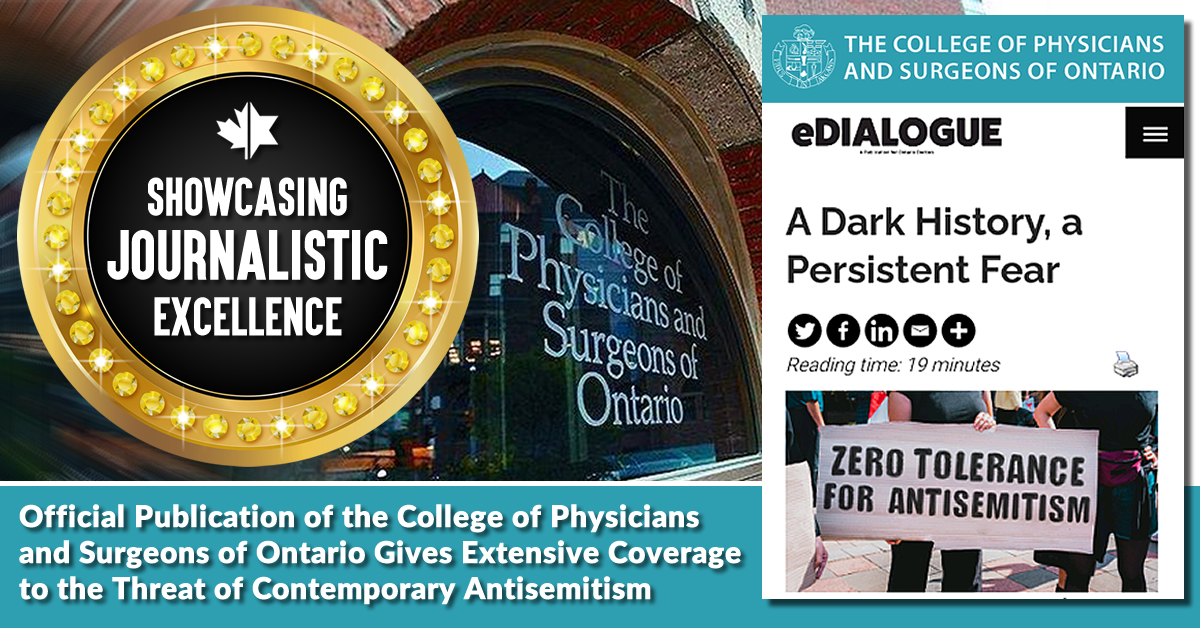 Far too often, in the face of problematic anti-Israel or antisemitic content being published or broadcast in the Canadian news media, HonestReporting Canada is forced to mobilize our 50,000 subscribers who call for corrective action be taken.

It’s very rare that we are able to expose excellence and applaud news outlets for doing praiseworthy work that deserves positive recognition.

This is one of those cases.

In the September 20 edition of eDialogue, the official publication of the College of Physicians and Surgeons of Ontario (CPSO), published a 4,000+ word feature article entitled: “A Dark History, a Persistent Fear,” which gave in-depth coverage to the issue of contemporary antisemitism, and specifically how it relates to medical practitioners in the healthcare system, as part of an ongoing series on racism and cultural discrimination in the health care industry.

The feature-length article began by citing anecdotes of how antisemitism can manifest in healthcare, and interviewed a urologist at Humber River Hospital, Dr. Sharon Sharir, who shared examples of antisemitic incidents she experienced. These included her having a patient who spewed anti-Jewish comments at her, to an incident where an organizer at a diversity program expressing disquiet over having a Jewish speaker present to marginalized communities, because Jews are viewed as privileged.

Referring to the disproportionate amount of hatred that Jews face – though representing 1.25 percent of the Canadian population, they face 60 percent of religiously-motivated hate crimes, according to Statistics Canada – eDialogue cited new procedures from the CPSO aimed at combatting hatred in healthcare,  including one draft policy called ‘Human Rights in the Provision of Health Services,’ which aims to create “obligations for physicians to create and foster a safe, inclusive and accessible environment” for patients from diverse backgrounds.”

The feature article also documented the history of antisemitism in healthcare,  including how medical schools instituted quota systems on the number of Jews who could enroll, and how Mount Sinai Hospital in Toronto was created 99 years ago because no hospital at the time was willing to hire Jewish doctors. Today, Mount Sinai Hospital is ranked as one of the top hospitals in the entire world.

eDialogue interviewed Dr. Sandy Bachman, a Jewish physician and past president of the Canadian Medical Association, who pointed out that one of the challenges in combatting antisemitism is that Jews are not seen as being victims of hate by virtue of their perceived privilege. As such, he told the magazine how critical it is for both Jews and allies to be vocal in their opposition to antisemitism, telling the magazine that “I think we have finally come to grips with the fact that we do have something to say about what it feels to be targeted and harassed just by virtue of belonging to a particular minority group.”

The article gave a concrete example showing how contemporary Jews, despite their experience with antisemitism, can be often overlooked in the fight against discrimination, but also how those challenges can be overcome.

eDialogue cited the University of Toronto Diversity Mentorship Program, which connects undergraduate medical students and residents from minority groups with faculty members “to assist them in their educational and professional growth.”

However, despite its intentions, the article shared the experience of Dr. Sharir from Humber River Hospital, who became involved in the program, only to later quit, seeing that Jewish students were not generally included. But thanks to feedback, “the program began making outreach efforts to welcome Jewish students into the program,” according to the report.

This openness to critique and improvement on the part of the University of Toronto program helped to get Dr. Sharir re-involved. “It was the first time in my social activist life that I’ve ever seen this kind of recognition happen. I really give them kudos for doing this,” Dr Sharir told the publication.

As eDialogue pointed out, antisemitism can often rear its head in response to contemporary issues.

The Covid-19 pandemic was used by some individuals to send antisemitic hate to Jewish physicians, a chilling reminder of how during the Black Death, Jewish communities in many parts of Europe were attacked due to accusations that Jews were somehow responsible for the bubonic plague.

The article concluded with the reminder that antisemitism in medicine targets more than just Jews; it also lowers the quality of medical service offered to everyone. “If you can’t bring your true self to work, if you face hate, you’ll be burned out and won’t be as good a doctor,” Dr. Ayelet Kuper, the former Senior Advisor on Antisemitism at the University of Toronto’s School of Medicine, told the publication.

Kudos to eDialogue for giving such extensive and comprehensive space to this critically important issue.