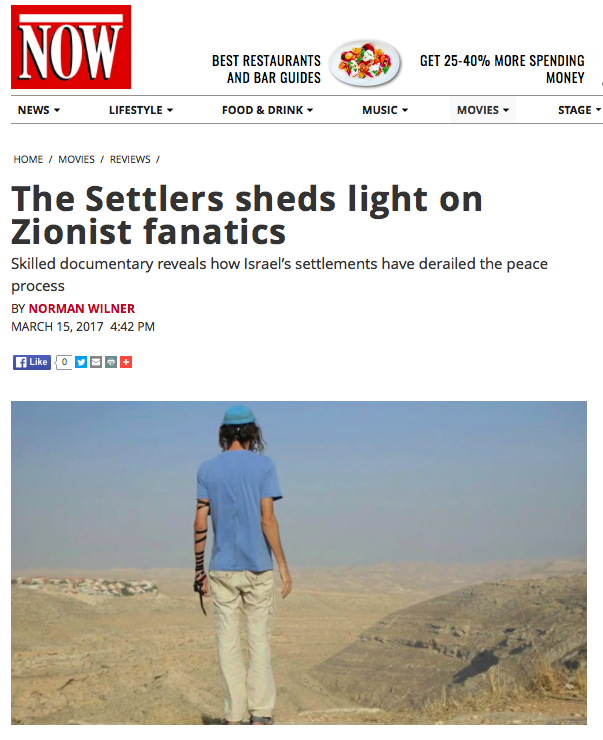 In a March 15 review on the documentary film “The Settlers” by Shimon Dotan, Now Magazine writer Norman Wilner writes that Israeli settlements have “derailed” the peace process and that the settlements are built on inherently “Arab” land.

No mention that Palestinian intransigence, unilateralism, incitement, and violence have produced a process, but no peace and has protracted the conflict. No mention that the Palestinian failure to accept the right of the Jewish state to exist is what is truly impeding peace.

Nor was there any mention of the Israeli religious claims and legal rights to the lands where the settlements exist and how the 1967 Six Day War was a war of self-defence waged against pan-Arab armies threatening Israel’s annihilation.

No sense of balance could be found in the review, nor was an Israeli perspective included. Instead, Now Magazine readers were made to fear of “Zionist fanatics.” What about Israel’s fear of Hamas “fanatics” bent on a genocide of Jews?

The publication’s review states that former Israeli prime minister “Ariel Sharon, who used the Palestinian violence provoked by the settlers as an excuse to drag his feet on peace negotiations.” 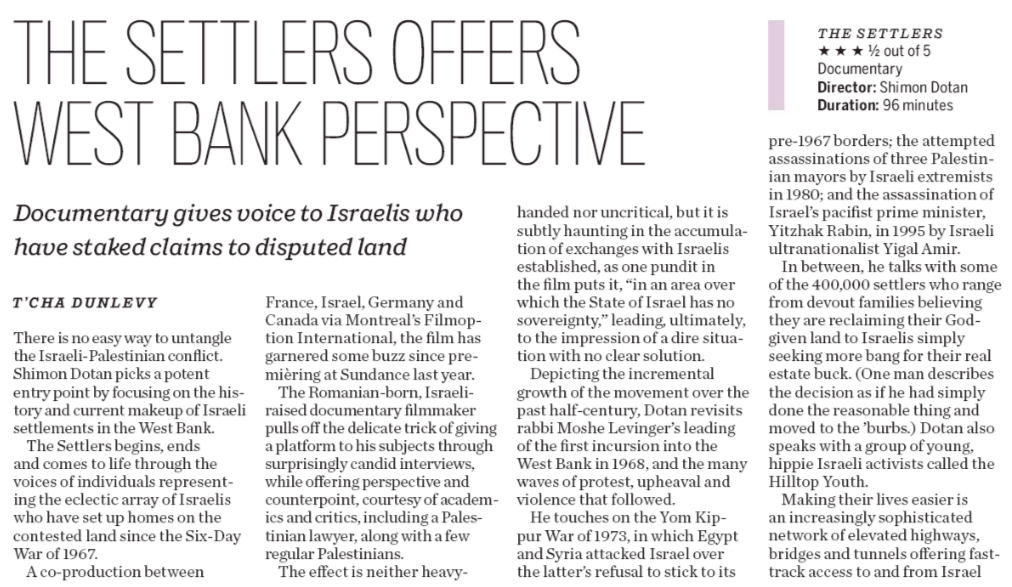 Talk about historical revisionism. Sharon did not drag his feet on peace negotiations, he unilaterally disengaged from Gaza, uprooting 8,500 settlers, closing all settlement in Gaza and several isolated ones in the west bank, all while pulling all soldiers out of Gaza, in an effort to safeguard Israel and trade “land for peace”. He did this without getting anything in return. Even $14-million dollars worth of 3,000 greenhouses were left intact, only to be destroyed by Palestinians who ransacked them. (Palestinian terrorists in the years since then have fired tens of thousands of rockets at Israeli cities, deadly bombs which have maimed, traumatized, and murdered innocent Israelis.)

In sharp contrast, the Montreal Gazette’s review of “The Settlers” by critic T’Cha Dunlevy makes a point of saying that the lands in question are “contested” and “disputed” in the following passage and sub-headline (see image left): “The Settlers begins, ends and comes to life through the voices of individuals representing the eclectic array of Israelis who have set up homes on the contested land since the Six-Day War of 1967.”

Please write a letter to the editor to Now Magazine to criticize this biased one-sided anti-Israel review. Send letters to: letters@nowtoronto.com.