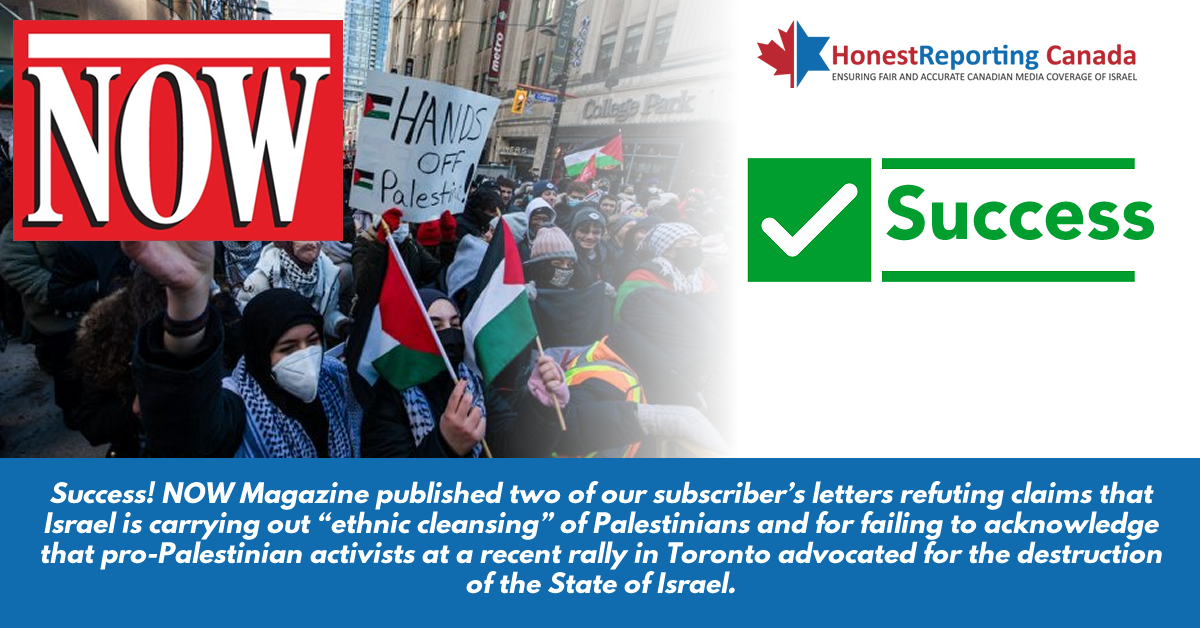 Subsequent to the release of our alert on February 1 about how a recent Now Magazine article had ignored a pro-Palestinian rally’s calls for Israel’s destruction and had spread the “ethnic cleansing” falsehood, HonestReporting Canada subscribers were published taking the Magazine to task for its biased anti-Israel reporting.

Their letters are as follows:

Re In Photos: Hundreds march in Toronto in support of Hands Off Palestine (NOW Online, January 30)

Shame on NOW Magazine for giving an undue platform to the false narrative that Israel is engaging in ethnic cleansing. You have an obligation to your readership to present a reasonably balanced understanding of any sensitive issue and call out rather than promote as you did those who call for Israel’s destruction.

Your article on the Hands Off Palestine protest states that “Israeli forces continue evicting families from their homes in Sheikh Jarrah to make way for more Jewish settlers” and referred to “pro-Palestine activists” marching through Toronto to protest the “recent expropriation of Palestinian land in the West Bank”.

According to a recent court decision, the title of the homes in the Sheikh Jarrah neighbourhood are registered to Jewish owners going back to before Jordan had control of the area. There’s actually no dispute about this. Jewish owners agreed to allow Palestinians to continue to live there until their parents die, but they refused those terms. A court was forced to rule that the homes have to be returned to the legal owners immediately and Palestinian protests ensued.“

Pro-Palestine activists” were also mentioned here. While that could be true, it was clear in the statements and chants of the “activists” they were advocating the destruction of the state of Israel. 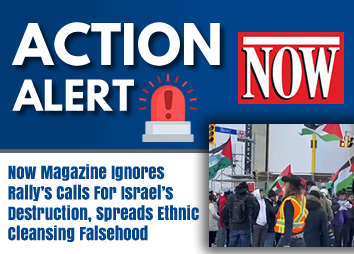 On January 29, hundreds of people attended an anti-Israel rally in Toronto with protestors chanting “From the river to the sea Palestine will be free,” and “intifada, intifada” and “we don’t want two states bring us back to ’48.”

Instead of promoting peace and coexistence between Israelis and Palestinians, these protestors called for violence, for the Jewish state’s destruction and for the implicit genocide of Jews.

Amazingly, Now Magazine’s coverage on January 30 completely ignored these genocidal proclamations. Instead, Now Magazine spread a falsehood that Israel was engaging in ethnic cleansing of Palestinians by reporting the following:

Untold by Now Magazine, this was a case of a local property dispute where the occupants, the Salihiya family, were lawfully evicted by Israeli Police as they illegally built a residence and commercial business on the land in question. The Israeli Police were enforcing a 2017 Jerusalem District Court decision to evacuate the area in question which had been designated as a statutory area for public needs.

It’s been reported that the Salihiya family refused compromises and alternative arrangements, preferring to continue to illegally occupy the land in question.

Like all democracies, Israel respects the rule of law. Accordingly, when land is designated as public property and is illegally occupied by individuals who built illegal homes and private businesses, eviction orders are enforced for the good of the public. 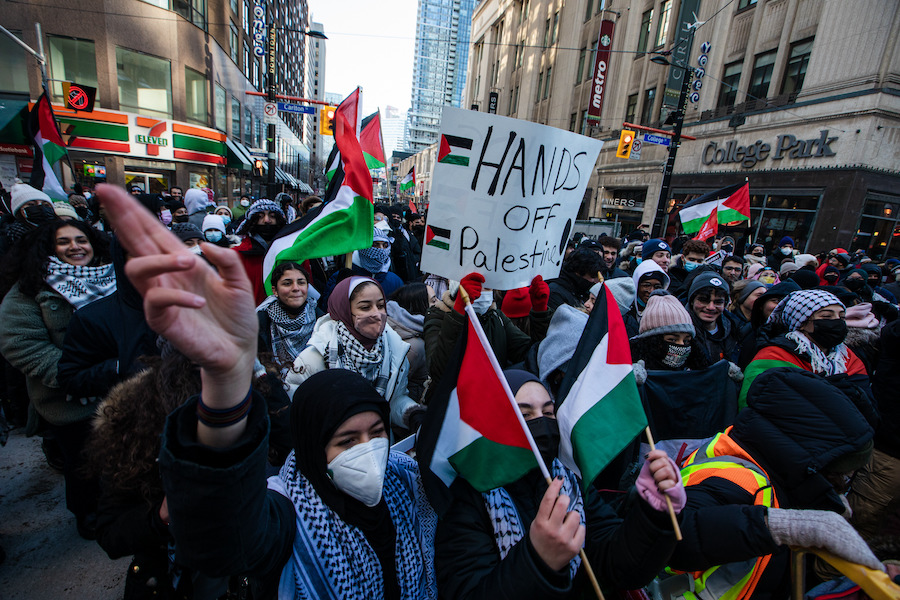 Now Magazine ignored how the Jerusalem Municipality is promoting an important and historic plan to establish an educational complex tailored to Arab children with special needs in east Jerusalem. As part of the plan, 18 classrooms will be built, along with 6 kindergartens, sports fields and leisure facilities.

The Jerusalem Municipality says that “The claims that the area will be expropriated for the purpose of transferring it to Jewish residents are false and unfounded.”

In the last Hamas against Israel war, the terror group used a property dispute in Jerusalem to justify rocket barrages against the Jewish State. In the neighbourhood of Shimon HaTzaddik/Sheikh Jarrah, a group of Arab tenants refused to pay rent to their Jewish landlords, claiming to be the true owners. Despite copious legal evidence proving the Jewish ownership, no evictions have taken place since 2017, certainly none that were violent. Instead, Israeli courts proposed a compromise that would allow the Palestinian-Arabs living in this neighbourhood to be granted “protected status” and not be evicted. In exchange, they would have to pay a small and symbolic fee to the legal owners of the land.

It’s been reported that some of the families were inclined to accept this offer, but after pressure by Hamas and the Palestinian Authority, they refused.

Shame on Now Magazine for giving an undue platform to the false narrative that Israel is engaging in “ethnic cleansing” and for ignoring how these anti-Israel protestors called for the Jewish state’s annihilation.