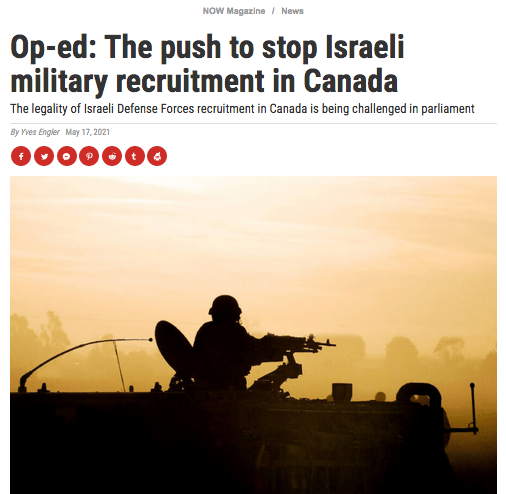 In the war to delegitimize the Jewish State, there appears to be a new campaign of disinformation being used against Israel.

In Yves Engler’s May 17 op-ed in Now Magazine, “The push to stop Israeli military recruitment in Canada,” he claims that the Israel Defence Forces (IDF) are illegally recruiting for soldiers in Canada, in contravention of the Canadian Foreign Enlistment Act, and that Parliament should soon step in and put a halt to this recruitment effort.

The Enlistment Act specifies what is illegal about foreign enlistment: “Any person who, within Canada, recruits or otherwise induces any person or body of persons to enlist or to accept any commission or engagement in the armed forces of any foreign state or other armed forces operating in that state is guilty of an offence.”

But if one digs down just a bit deeper, despite this oft-repeated claim of illicit Israeli recruitment in Canada, the reality is that this claim of the IDF widely recruiting in Canada is simply false.

The truth is in fact far simpler. There are an estimated 15,000 to 30,000 Israeli citizens living in Canada, most of whom are in the Greater Toronto Area (GTA), but with sizeable populations in Vancouver and Montreal, as well. They represent anywhere from eight to 15 per cent of Canada’s Jewish population.

But Israeli citizens, even if they live outside of Israel, are still subject to their country’s laws, particularly with respect to military enlistment, which is compulsory.

As Galit Baram, Israel’s Consul General to Toronto and Western Canada, clarified to the Canadian Jewish News (CJN), any IDF information is aimed specifically at Israeli citizens living in Canada, and not to anyone else.

“Israeli law dictates compulsory military service to Israeli citizens over the age of 18, whether male or female. Consequently, Israeli citizens of drafting age living abroad are required to settle their status with the Israeli authorities, through Israeli consulates around the world,” Baram told the CJN.

Furthermore, an estimated 35,000+ Canadians currently live in Israel, and any Canadian who decides to move to Israel is required by law, depending on age and other circumstances, to enlist in the armed forces. As such, holding information sessions about the IDF is clearly within the realm of that mandate.

With a modicum of research, then, it is abundantly clear that contrary to Engler’s claims of widespread IDF recruitment to Canadian citizens is simply without basis. But the bigger issue is why, of all the 200+ countries in the world, he takes issue with one tiny country, smaller than Vancouver Island, defending itself against armed aggression from Islamist terrorist groups?

He writes that “It’s long past time to stop Toronto’s direct complicity in violence against Palestinians,” but writes nothing about the barrage of rockets from Hamas & Islamic Jihad, two groups who are sworn to Israel’s destruction, and who have fired more than four thousand rockets, indiscriminately at Israeli civilian centres, in recent weeks.

These Palestinian murder rockets purposefully target Israeli schools, hospitals, and power stations in Israel which provide electricity to the Gaza Strip, and even Israeli aid convoys to the Hamas-run enclave.

So while Palestinian rockets rain down on Israeli civilians, murdering foreign workers from Thailand and India, an elderly woman, an Arab Muslim father and daughter, a five year old boy, and others, and Jews are assaulted here in Canada by pro-Palestinian activists for standing up for Israel, Engler argues that Israel educating Israeli citizens is one of the most pressing threats facing Canada.

Engler – who in 2016 argued that “antisemitism is of such insignificance that increasing something so insignificant is not that big a deal” – contrary to Statistics Canada’s own research showing Jews are the most targeted religious group in the country, is wrong on two major counts: that Israel is actively recruiting for the IDF to Canadian citizens, and that Canadians should be taking issue with that, if it were in fact happening.

But, contra Engler, what Canadians should be taking issue with is the misuse of facts to serve one’s ideological agenda, and to disallow Israel’s right to defend itself against a murderous, Islamist terrorist group – the same right and responsibility that all countries have to their people.

Send your considered comments to Now Magazine and add your views to the message board appended to this column.