Now Magazine published the following letters by three HRC subscribers in response to their previously giving a platform to antisemitic tropes: 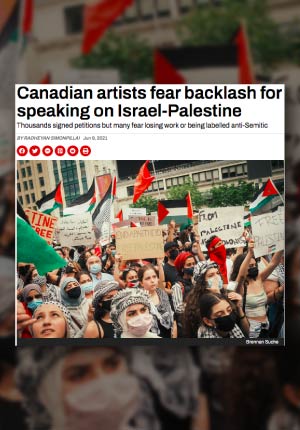 What inspires a writer to do a piece on the backlash against artists who express support for the Palestinian cause when there is none?

That’s not to say that examples aren’t put forward in this article. The author does refer to the two times that Hollywood stars walked back their criticisms of Israel – a celebrity couple in 2014 and The Incredible Hulk in 2021.

Then there’s the CBC which we are told felt it better not to have its Israel-Palestine coverage provided by journalists who openly accused Israel of indiscriminate killing and ethnic cleansing. You see this too, right guys? Of course, fearing the reach of the Jewish tentacles of power (sorry, “the really powerful arms of Zionism”) is nothing new. But it sure is disappointing to read an article working so hard to justify that phobia in a Toronto weekly.

The problem with this article is that Palestinian and Arab extremism is glossed over so that your readers have a slanted understanding of what is happening in Israel and the Palestinian Territories and Gaza.

NOW Magazine and its interviewees seem to think that Zionism, a political movement striving to return national sovereignty to the long-exiled Jewish people in their ancestral homeland, should be filed away in the same drawer of evil as an ideology intent on harming and destroying the Jewish people.

This absurd stance is not too surprising from a historical perspective. Hatred towards Jewish people has always been dressed up in the current taboos of society. Now the Jewish people’s desire for self-determination marks them as the bugaboos of colonizers and oppressors.

Your article mentions celebrities and artists who have experienced pushback because of their antagonism towards Israel. Aside from the obvious fact that the political Left itself birthed and engages in the techniques of cancel culture, the lived experiences of Israeli actors like Gal Gadot should illustrate that it is not always so peachy being pro-Israel. Weeks back, she published a post on social media that displayed her support for the IDF and her desire for peace between Israel and its neighbours. Her punishment for this affront was to be vilified across the internet by the anti-Israel camp, with calls for her to be fired from the role of Wonder Woman. 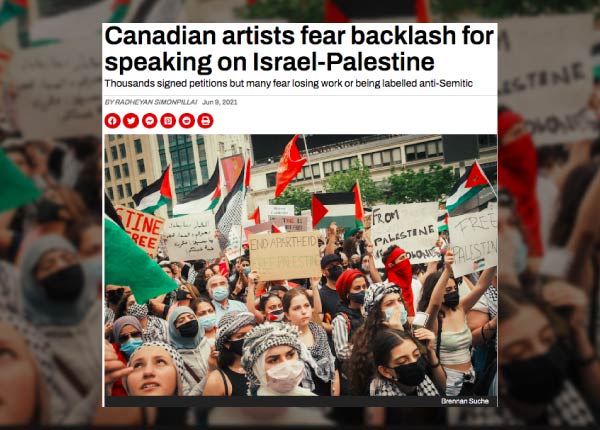 At a time when antisemitic attacks, harassment and discrimination are at an all time high in Canada, Now Magazine has the gall to quote an anti-Israel group who claims that Zionism “serves the goals of global white supremacy.”

That statement was made by none other than the radical and fringe anti-Israel Canadian organization known as Independent Jewish Voices (IJV).

In a June 9 article by Radheyan Simonpillai, ostensibly about Canadian artists who fear backlash for speaking on the “Israel-Palestinian conflict”, IJV’s “communications lead,” Aaron Lakoff, made the following statement:

‘A lot of the time we actually forget the really powerful arms of Zionism are also supported by Christian Zionists or by white WASP Republican groups or white conservatives,’ says Lakoff. We have to remember that the goals of Zionism really do serve the goals of global white supremacy.'”

Associating Zionism, which is defined as the right of the Jewish people to self-determination in their ancestral homeland, to white supremacy, is beyond the pale. White supremacy is the belief that white people are a superior race and should dominate society, to the exclusion or detriment of other racial and ethnic groups, in particular black or Jewish people.

Richard Cravatts, the immediate Past-President of Scholars for Peace in the Middle East, describes this tactic as follows: “Nazifying ideological opponents is a tactic that campus anti-Israel groups and individuals have long used as part of the ongoing cognitive war against Israel, in which Zionism is racism, Israelis are the new Nazis, Gaza is equivalent to the Warsaw Ghetto, Israel is committing genocide against the guiltless Palestinians (a ‘Holocaust in the Holy Land,’ as one student event called it), and the Star of David of the Israeli flag is regularly manipulated to incorporate a swastika.”

Cravatts argues: “And this assumption is dangerous because, if it is accepted by other leftist and radical campus groups, it will mean that, as the UN infamously achieved in 1975, Zionism again will be equivalent to racism, and any supporters of Israel can thereby be condemned and thrown into that ideological bucket of white supremacists, racists, and neo-Nazis that now seem to so animate the imaginations of Democrats, liberals, and marginalized and oppressed minorities.”

IJV’s Lackoff commits antisemitism as he denies Jews their right to self-determination by claiming that Zionism, and Israel’s very existence, is a racist endeavor and by drawing tacit comparisons of contemporary Israeli policy to the Nazis.

Now Magazine’s article also had an insidious underlying tone that powerful Jews (“pro-Israel groups”) control the entertainment industry and that they somehow stifle people from showing their support for Palestinian human rights for fear of reprisal and that they would lose their jobs. The article says: “But sustained pushback from pro-Israel groups still prevents many from speaking out for the fear of losing work or being labelled anti-Semitic…. We’re seeing the muzzling of voices here in Canada as well…”  Make no mistake, these are all bona fide antisemitic tropes.

IJV’s Lackoff also claimed that pro-Israel organizations “paint a picture of ‘an incredible rise’ in antisemitism.” In sharp contrast, Statistics Canada’s own research found that Canadian Jews are the most targeted group for hate crimes. Lackoff then claims that “well-funded websites exists to dox anyone supporting the Palestinian cause.” Once again, Jewish-funded (“pro-Israel funded”) websites dox Palestinian supporters.

Fundamentally, claiming that Zionism is akin to white supremacy is antisemitic. White supremacy is based on hate, racism, and sowing discord, whereas Zionism is the national liberation movement of the Jewish people’s right to sovereignty in their historic homeland, which protects minority rights in Israel and where Jews seek to live in peace and harmony with Israel’s non-Jewish citizens.

IJV uses antisemitic tropes and comparisons to white supremacy to vilify Zionism and to challenge the legitimacy of the State of Israel. Shame on Now Magazine for giving a platform to toxic antisemitism that has the potential to fan the flames of hatred. Send your complaints to Now Magazine now (click here) and send Tweets to @justsayrad and @NowToronto.