No Place for Antisemitism in Toronto Star: An Open Letter to Editor-in-Chief Michael Cooke 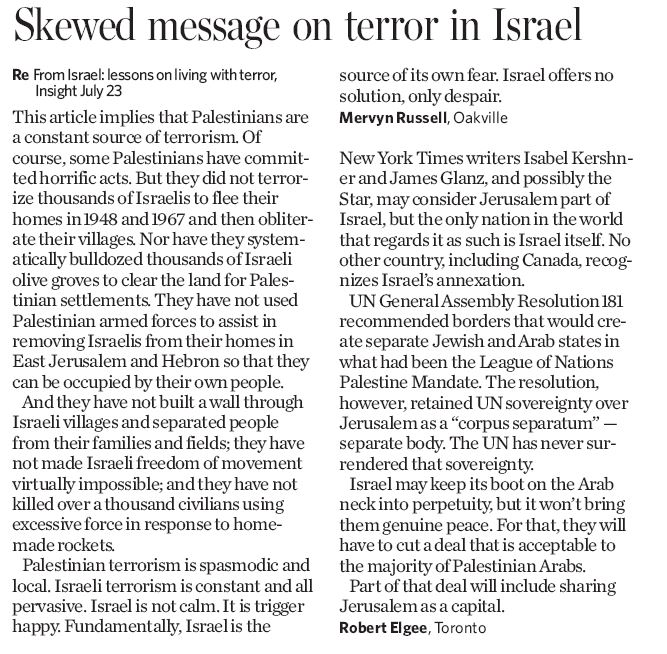 There’s an important line separating legitimate opinion that enhances the public discourse, from hateful rhetoric that interferes with constructive dialogue. As a non-profit organization which ensures fair and accurate Canadian media coverage of Israel, HonestReporting Canada (HRC) is a staunch advocate for freedom of expression and a wide marketplace of ideas, but there are limits.

On July 31, Toronto Star editors published several letters to your website under the headline: “Skewed message on Israel terror” with letters claiming that Israel commits terror attacks on Palestinian innocents. In other words, that Israel deliberately murders innocent Palestinian men, women, and children for political purposes. Of the seven letters published, 6 were anti-Israel and only 1 was pro-Israel (In the print edition, the Star published two of the anti-Israel letters written by Mervyn Russell and Robert Elgee.). So much for balance and fairness.

In Robert Fantina’s letter, Israel is accused of carrying out a “genocidal attack on Gaza.” To allege that Israeli military actions in the Gaza Strip are akin to “genocide,” which is defined as “the deliberate and systematic destruction of a racial, political, or cultural group” is inflammatory commentary not fit for publication and which we contend is in breach of the Star’s own “commenting guidelines” as this claim is “defamatory, obscene, profane, and contain(s) hate speech.”

This HonestReporting.com infographic puts to rest the allegation of a Palestinian “genocide”: 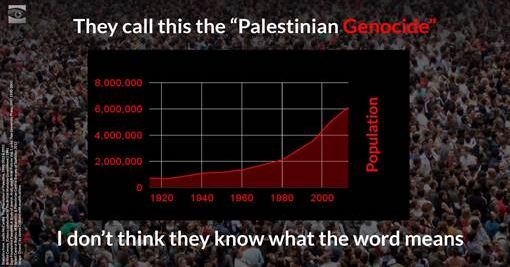 Secondly, Toronto-resident Vera Szoke invoked a comparison of contemporary Israeli policy to that of the Nazis when stating the following:

“On Jan. 8, 2009, in the midst of Operation Cast Lead, I participated in a press conference that was reported in the Star by Haroon Siddiqui. Holocaust survivor Ursula Franklin, who just passed away at the age of 94 this past week, was one of the speakers. Her words are more meaningful and apropos than ever: she directly linked the horrors of World War II with Israel’s atrocities in Gaza, which were condoned and needlessly prolonged by the Canadian government’s opposition to a ceasefire.

Comparing the situation in the Gaza Strip to the Holocaust and World War II, crossed the line from fair opinion to hateful discourse. This comparison not only unfairly maligned the state of Israel, it also exploited the Holocaust through contemptible comparisons between the Nazis and the Jewish state. Szoke’s sordid attempt at linking the situation in the Gaza Strip to the suffering that Jews endured in the concentration camps during the Holocaust was beyond the pale. The reason this analogy was used is to trump up a libellous claim that Jews, who were once the victims of the Nazis during the Holocaust, are now the victimizers carrying out the “genocide” of Palestinians. It should be noted that comparisons of Israeli policy and actions to that of the Nazis fits the Ottawa Protocol’s and the U.S. State Department’s working definition of antisemitism.

Szoke also spewed the “apartheid” libel despite the fact that 20% of Israel’s population is comprised of Arabs who are afforded the same exact rights as Israeli Jews. Szoke also promulgated the “water libel” by claiming that “Very telling is the fact that Gazans have extremely limited access to clean water, while Jewish settlers water their lawns in the desert and fill their swimming pools.”

Facts are anathema to these anti-Israel activists. Israel exports volumes of water to the west bank greatly in excess of what the Oslo Accords had mandated. This is done, among other reasons, to compensate for the Palestinian Water Authority’s repeated failures to implement approved water projects. Over the past 20 years, the Palestinians have drilled at just one-third of sites identified for drilling in accordance with the Israel-PA Joint Water Committee, despite the fact that the international community has offered to finance the drilling of all sites. The Palestinians refuse to build water treatment plants, despite their obligation to do so under the Oslo agreement. The international community has offered to build a desalination plant for the Palestinians in the Gaza Strip. The Palestinians have refused this gift. As for theft, it’s the Palestinians who steal water by pirate tapping into pipes belonging to Mekorot, Israel’s national water company. As a result, Mekorot’s ability to supply water to Israelis and Palestinians alike has been compromised.

Ms. Szoke’s comments do not hold up to scrutiny and while constructive criticism of Israel is certainly legitimate, her comments crossed the line and we question the Star for giving her a platform.

Other letters published by the Star were misleading, contained half truths, and affirmed how a lie can travel halfway around the world while the truth is putting on its shoes.

Letter writer Mervyn Russell accused Israel of “terrorism,” of using “excessive force” and of killing 1,000 civilians while Palestinians shot only “home-made rockets” – not thousands of deadly mobile bombs. Russell claimed that “Palestinians did not terrorize thousands of Israelis to flee their homes in 1948 and 1967 and then obliterate their villages.” In reality, when the British Mandate over Palestine expired on May 14, 1948, the Jewish People’s Council proudly declared the establishment of the State of Israel. Immediately after, five Arab armies (Egypt, Syria, Transjordan, Lebanon and Iraq) invaded Israel in a war of annihilation. As Azzam Pasha, Secretary-General of the Arab League said at the time: “It will be a war of annihilation. It will be a momentous massacre in history that will be talked about like the massacres of the Mongols or the Crusades.” Most Arabs fled at the behest of Arab leaders (who had waged a war to wipe the nascent state of Israel from the map) to make way for the Arab victors, before returning to their villages. As Sir John Troutbeck, the head of the British Middle East Office in Cairo, stated during a 1949 fact-finding mission to the Gaza Strip: ‘We know who our enemies are,’ they [the Arab refugees] will say, and they are referring to their Arab brothers who, they declare, persuaded them unnecessarily to leave their homes.”

Most egregiously, letter writer Elizabeth Block of the anti-Israel group “Independent Jewish Voices” actually wrote “And of course Palestinian violence is useful.” Are suicide bombings at pizza parlours, stabbings of teenagers and shootings of Israeli civilians “useful”? Block also outrageously claimed that Israel attacks “… their children (including kindergarteners) on the way to school.” There is no foundation to this repugnant claim which was echoed by letter writer Robert Fantina who claimed that “illegal Israeli settlers’ murders of Palestinian children”. Fantina (the letter writer who as mentioned earlier accused Israel of committing a Palestinian “genocide”) also seemingly justified Palestinian terror against innocent Israelis by saying that “the United Nations-endorsed right of an occupied people to fight the occupier.”

Mr. Cooke: As Editor-in-Chief of the Toronto Star, Canada’s largest daily newspaper, you are entrusted with the responsibility to curate commentaries which contribute positively to the marketplace of ideas, and to not publish hateful rhetoric that salaciously tars the Jewish people collectively and the State of Israel with falsities and which fanes the flames of hatred. On behalf of our 30,000 subscribers, we appeal to you directly to intervene and to institute editorial policies ensuring that only constructive opinions be published by the Toronto Star.

We look forward to your reply.

Following the issuance of our open letter sent yesterday to the Toronto Star, the following two pro-Israel letters were published (one in print, two online) under the headline “Letters missed mark on Israel”: 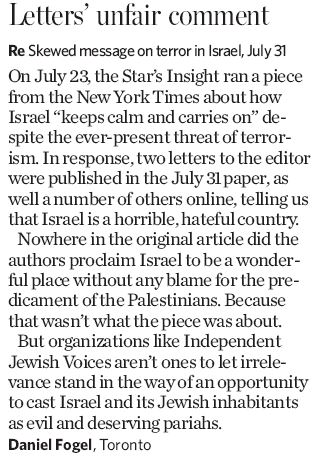 UN sovereignty over Jerusalem as a “corpus separatum” was provided, but the Arabs never accepted the resolution and invaded Palestine. The Kingdom of Transjordan (later Jordan) taking over the Old City and the West Bank destroying all synagogues as well as evicting all Jews.

Resolution 181: Part D provided for 10 years (1948 to 1958) at which a referendum be held – at that date the majority was overwhelming Jews but Jordan never relinquished control.