How did a report on the crisis in the Ukraine become all about Israel? Leave it to the CBC’s Senior Washington correspondent, Neil Macdonald, to use the Ukraine as a platform for a gratuitous attack on Israel. 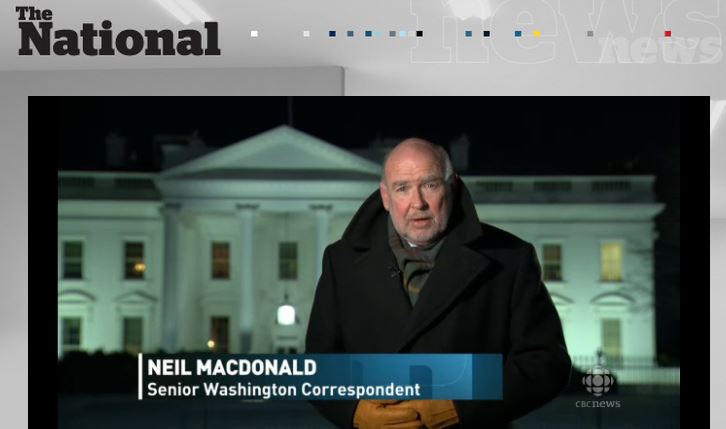 The central thrust of Macdonald’s March 3 CBC National report (watch by clicking on the image at right) was that Obama’s criticism of the Russian move into the Crimea stood in violation of international law which, according to Macdonald, is hypocritical.

Macdonald cited the Americans for alleged hypocrisy by featuring a clip showing Israeli Prime Minister Benjamin Netanyahu and U.S. President Barak Obama in the Oval Office, and implied that the West’s hypocritical attitude towards the Russian incursion was reflected in how Israel “occupies” the west bank.

Here is a transcript of what Macdonald said (emphasis added): “America, of course, has invaded multiple countries on its own authority and today, Obama lectured Russia while sitting alongside an ally who occupies the west bank in violation of international law. But hypocrisy is part of the warp and wepth of diplomacy…”

Macdonald also produced an “analysis” piece on the CBC’s website on March 5 entitled “The Ukraine crisis through the whimsy of international law” where he again dragged Israel into the story, to the absurd point where the lead photo of this report about Russia and the Ukraine depicts Obama and Netanyahu at the Oval Office: 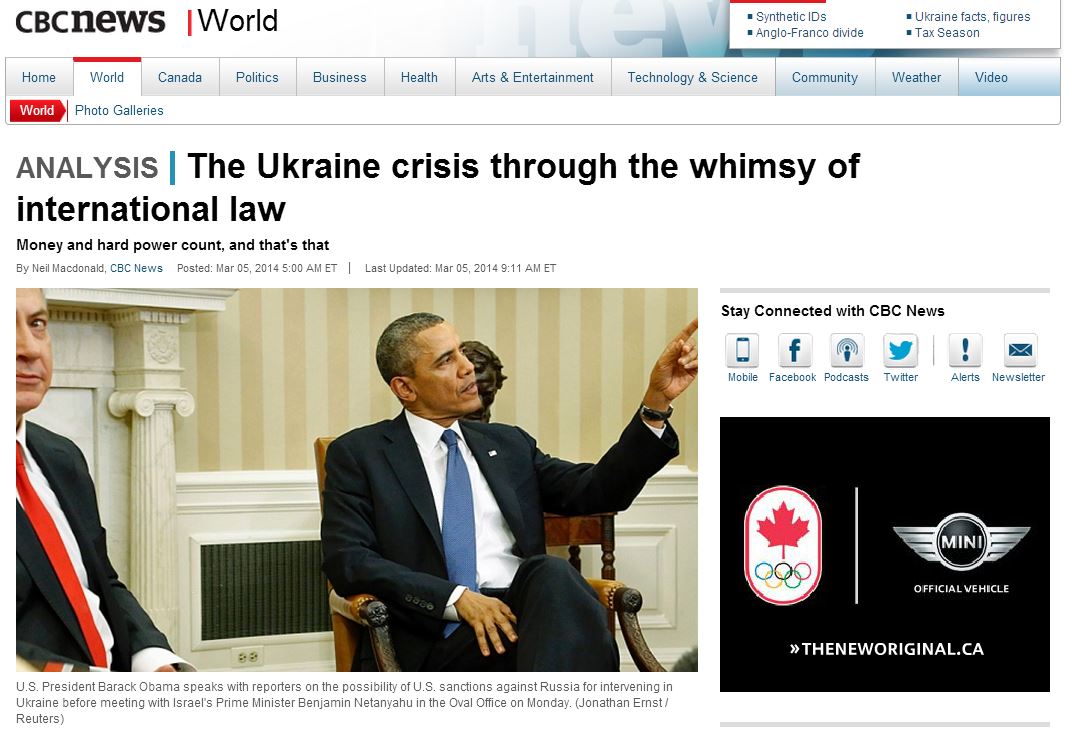 Macdonald wrote the following in his CBC.ca “analysis” (emphasis added):

“In Obama’s case, sitting beside him on Monday as he gave his lecture on international law from the Oval Office was close ally Benjamin Netanyahu.

The Israeli prime minister, having just engaged in a protracted, robust handshake for the cameras, presides over country that operates a military occupation in the West Bank, violating the “international law” Obama was demanding Putin obey.

The U.S. insists that Israel’s occupation can only be solved by respectful negotiation between the parties themselves, and it vehemently opposes punishing Israel with the sort of moves currently being contemplated against Russia.

It’s easy to go on and on in this vein — Britain’s prime minister, who leads a nation that helped invade Iraq on a false pretext, denouncing Putin’s pretext for going into Crimea. The NATO powers that helped bring about the independence of Albanian Kosovars complaining about the separatist aspirations of Russian-speaking Ukrainians, etc.

But that’s diplomacy. Hypocritical declarations and acts are woven into its essence.”

In 1967, Israel came to control east Jerusalem and the West Bank in a defensive war after another attempt by Arab nations (Syria, Jordan and Egypt) to crush Israel. East Jerusalem and the west bank had been unlawfully occupied by Jordan since 1948 after the first war of annihilation against the nascent State of Israel. Until the fate of the territories is decided by a final peace agreement, Israel has the right to administer these lands.

In other words, the so-called “occupation” is hardly illegal, coming as it did in a defensive war. The legal status of the territories is thus “disputed”, in accordance with UN resolutions 242 and 338. Indeed, Israel also has legal and historical claims to the region. Israel’s legal claim to the west bank is by virtue of the Balfour Declaration, the San Remo Declaration of 1920, the League of Nations instrument, Article 80 of the UN Charter and the laws of conflict, which Mr. Macdonald, given his obsession with Israel, would do well to read.

Dragging Israel into a report on the Ukraine is further evidence of Macdonald’s apparent obsession with Israel’s alleged misdeeds. HonestReporting Canada has consistently exposed Macdonald’s modus operandi, in which he twists unrelated world affairs stories into criticisms of Israel. In fact, there are so many journalistic transgressions that space prohibits listing them all, but here are the top 10:

CBC journalists are tasked to be politically neutral and to embargo their personal views in their professional work. Macdonald’s apparent obsession with Israel seems to be the exception to the rule, allowing him to use CBC resources to attack Israel, time and again. Enough is enough. It’s time for the CBC to acknowledge that a problem exists with Macdonald’s reporting.

Please file a complaint with CBC Editor-in-Chief Jennifer McGuire by sending emails to: Jennifer.McGuire@CBC.CA. Please cite Neil Macdonald’s gratuitous smear against Israel in his  reporting on the crisis in the Ukraine. Please refer to Macdonald’s March 3 CBC National report and his March 5 “analysis” piece on the CBC’s website.