Neil Macdonald: “I Still Believed…. That The Holocaust Happened.” 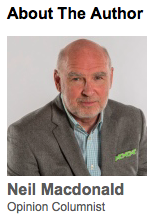 In an opinion commentary published on the CBC’s website entitled: “Censorship is patronizing. Always has been, always will be”: Neil Macdonald writes that “From trying to silence Holocaust deniers to shouting down Richard Spencer: censorship never changes.”

In his polemic, Macdonald states the following:

“I had heard just about every argument made by Holocaust deniers, and yet none of it had had the slightest impact: I still believed, as I do now, that the Holocaust happened.”

Importantly, the Holocaust and the murder of six million Jews is an undisputed fact and well documented part of history . We don’t just “believe” it happened, we know it did.

People may “believe” in Santa Clause and the Tooth Fairy, not the Holocaust!