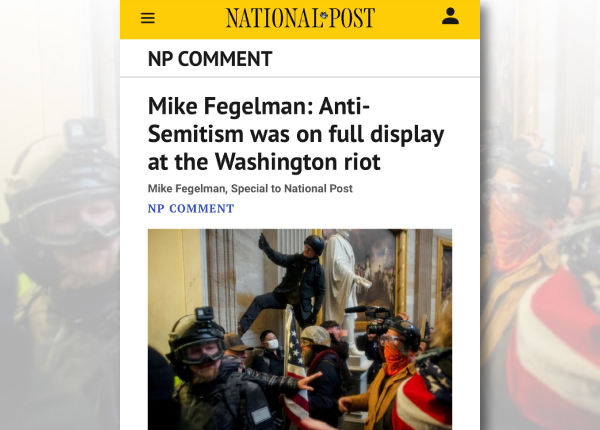 Today, the National Post published an important HRC op-ed about the recent insurrection in Washington DC, which should serve as a clarion call about the dangers that hate mongers pose and how Jews worldwide were disturbed to see toxic antisemitism openly displayed.

As we noted in our commentary about the riot, the virus of antisemitism is alive and growing, malleable and mutating. This cancer is malignant and has metastasized. It needs to be isolated, exposed and rooted out, or it may find fertile ground and grow.

Read our full commentary immediately below or on the National Post’s website:

The images from last week’s riot in Washington, D.C., were shocking for many reasons. While mayhem and violence are tragedies under any circumstance, it was especially jarring to see an insurrection in the capital of the most powerful country in the world. And there were some images that, for the Jewish community in Canada and elsewhere, sent especially chilling messages.

One rioter, a bearded, middle-aged man, was spotted wearing a sweatshirt that read, “Camp Auschwitz: Work brings freedom,” with the word “staff” on the back. “Work brings freedom” is a rough translation of the German phrase, “Arbeit macht frei,” a sign that greeted prisoners at the Auschwitz-Birkenau death camp during the Holocaust.

The man with the sweatshirt has since been identified and arrested, but for Jews around the world who saw his image, it was a stark reminder that the virus of anti-Semitism is alive and growing, malleable and mutating.

It was also reported that two white nationalists known for their racist and anti-Semitic rhetoric live-streamed themselves breaking into the Capitol. On social media, videos circulated showing a man harassing an Israeli journalist who was trying to do a live report outside the building. It’s also been revealed that at least half a dozen neo-Nazi and white supremacist groups were involved in the insurrection.

From the extreme right to the extreme left, Jews are targeted with harassment and violence. The extreme left often refers to Jews with the pejorative brush and thin veneer of “Zionists,” but they’re clearly referring to the vast majority of Jewish people who support the existence of the State of Israel.

This far-left ideology blames “Zionists” for the alleged occupation of Arab land, and of warmongering and profiting off wars, claiming that Israel is the puppet master of the United States and that it is populated by extremist Jewish settlers and rabbis who espouse hatred and intolerance. The BDS movement has found a welcome home in the extreme left, where it can promote false claims about Israel within the framework of an anti-colonialist and progressive milieu.

Not to be outdone, the extreme right also peddles in anti-Semitism. For those who espouse this ideology, Jews are seen as “globalists,” an amorphous and undefined group who control global banking, mainstream media and global commerce.

The so-called alt-right movement and QAnon conspiracists have wholly embraced this type of anti-Semitism. According to them, Jews seek control over global industries to enrich themselves and to keep their opponents under their thumbs. They also believe that the global Jewish conspiracy seeks to keep the United States in a perpetual state of war so it will remain distracted enough not to notice that Jews run the world.

Today, anti-Semitism is a hodgepodge of BDS activists and anti-Israel propagandists, alt-right and QAnon enthusiasts, neo-Nazis, Holocaust deniers and more. Jews around the world are squeezed between violent extremists on both the far right and far left.

Jews are simultaneously communists and capitalists, religious extremists and godless atheists — guilty of two contrasting views at the very same time. If the situation weren’t so dangerous, it would almost be comical.

Unfortunately, the supposedly “Jewish-owned media” doesn’t often fully explain the extent to which the Jewish community faces hate. According to the most recent data available from Statistics Canada, the Canadian Jewish community has the dubious distinction of being the country’s most targeted group for hate crimes. While representing just over one per cent of Canada’s population, Canadian Jews are the victims of 20 per cent of all hate crimes, which includes vandalism, verbal assaults and violent crimes.

There are no winners when it comes to hate — every person and institution that is targeted is a victim. But the Jewish community’s current situation is unique: it faces violent opposition from both extreme ends of the ideological spectrum. One could go to a far-left rally or a far-right rally and see anti-Jewish messages being spread, often with remarkably similar phrasing.

Let us hope that decent people in America and around the world heed this clarion call, because the dangerous ideologies that were on full display in Washington last week need to be isolated, exposed and rooted out, or they may find fertile ground and grow. That would pose a tremendous danger to Jews and non-Jews alike.

Mike Fegelman is the executive director of HonestReporting Canada, a non-profit organization that ensures fair and accurate Canadian media coverage of Israel.