UPDATE: The Montreal Gazette has sent HonestReporting Canada the following apology for publishing Amnesty International Canada”s anti-Israel advertisement saying it did not meet its advertising guidelines and standards. Furthermore, the Gazette has scheduled a mandatory training session for its sales team to reinforce its polices and standards.

“The Amnesty International ad copy that was published in the Montreal Gazette on page A-4 on Monday, Dec. 6th, does not meet our advertising guidelines and standards. This advertisement should not have been published and was a direct result of human error. Our entire Local Sales Advertising Team across Canada will be attending a mandatory training session on Thursday December 9th, to further reinforce our processes and standards. We apologize for this mistake and believe the training and additional rigor around our submission processes will help to avoid this issue in the future.”

We commend the Gazette for recognizing its mistakes and for taking immediate corrective action to ensure that an incident like this doesn’t happen again. 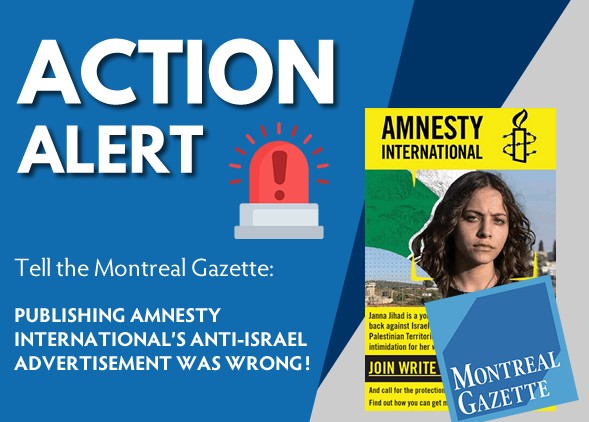 On December 6, The Montreal Gazette, published an advertisement by Amnesty International Canada, which was replete with anti-Israel misinformation and allegations devoid of any context.

The ad featured the photo of Janna Jihad, a 15-year-old Palestinian girl asserting that she’s “fighting back against Israel’s oppressive system in the Occupied Palestinian Territories,” and added that she “faces death threats and intimidation for her work speaking up for human rights.”

The Amnesty International Canada resources profiling Janna Jihad claim that she has been “harassed for exposing Israeli violence,” but nowhere does it provide a scintilla of evidence of any abuse, intimidation or harassment which Israel had allegedly committed against Jihad.

Amnesty International Canada points out that Jihad witnessed her uncle’s shooting death at the hands of the Israeli military, but conveniently omits the facts of the case. 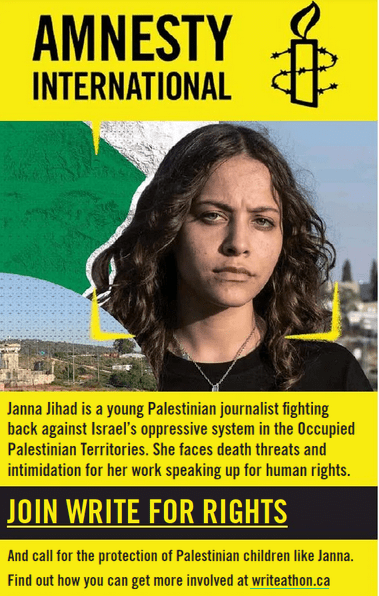 Jihad’s uncle, Rushdie Tamimi – a relative of Ahed Tamimi, the Palestinian teenager who was filmed physically assaulting Israeli troops –was killed in 2012 when he was part of a mob which was lobbing rocks at Israeli forces. It is critical to recognize that stones, far from being harmless pebbles, have been used by anti-Israel rioters to injure and even murder Israeli civilians. And while it is also true that an internal IDF probe found that the soldiers who fired were not justified in doing so, that very fact is a powerful rebuttal to Amnesty International Canada: that Israel is a country governed by the rule of law, and even when its soldiers act in self-defense, it will still be scrutinized and criticized if necessary.
Amnesty International Canada’s reference to “Israel’s oppressive system in the Occupied Palestinian Territories” is a masterclass in obfuscation and misdirection.

It is critical to first recognize that Israel’s presence in Judea & Samaria (frequently called the West Bank in media reports) is hardly a modern phenomenon. For three millennia, the Jewish People have called this land home, and in fact the term Jew – Yehudi in Hebrew – comes from the land of Judea, or Yehuda, in Hebrew. Jews have lived in their ancestral homeland for three thousand years, and fought against foreign invaders like the Romans, Greeks and others for millennia to maintain independence. But to Amnesty International Canada, that seemingly means nothing at all.

It’s also critically important to mention that Amnesty International Canada’s claim that Israel has an allegedly “oppressive system” is a meaningless and misleading term. Israel’s presence in its historical homeland is demonized by organizations such as Amnesty International Canada, and when faced with violence and terrorism, any steps Israel takes to defend itself are likewise harshly criticized. It seems that not only does Israel have to apologize for its very existence in its own ancestral 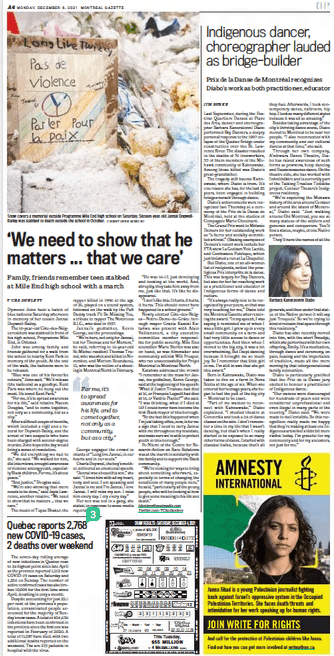 land, when it dares to defend itself, it only digs itself a deeper hole.

But what is perhaps the most tone-deaf about Amnesty International Canada’s references to the “death threats and intimidation” allegedly facing Janna Jihad is that while it certainly is a stretch to refer to Israel in those terms, it describes to a tee the actions of the Palestinian Authority (PA) against any party who dares to threaten its rule in Judea & Samaria/the West Bank. No less than Amnesty International reported that the Palestinian Authority was known to “arbitrarily arrest…peaceful demonstrators, opponents, critics, journalists and human rights activists.”

Of course, Janna Jihad is no threat at all to the Palestinian Authority’s rule. In fact, she’s been one of the most powerful propaganda tools used by the Palestinian leadership against Israel, and has been trotted out since she was a child in an attempt to demonize Israel to the world.

Amnesty International Canada is no stranger to spreading anti-Israel misinformation, but The Montreal Gazette certainly should have known better than to run an advertisement like this. Reasonable people can have differing views on Israel’s governmental policies, but that does not give Amnesty International Canada – or, by extension, The Montreal Gazette – the right to erase Israel’s legitimate and historical presence in its own homeland, and then give selectively omitted facts to help bolster their anti-Israel case.

Send your considered and polite comments to the Montreal Gazette at: letters@montrealgazette.com.