Middle East Peace Should Be Celebrated, Not Condemned: HRC Says In The Hill Times 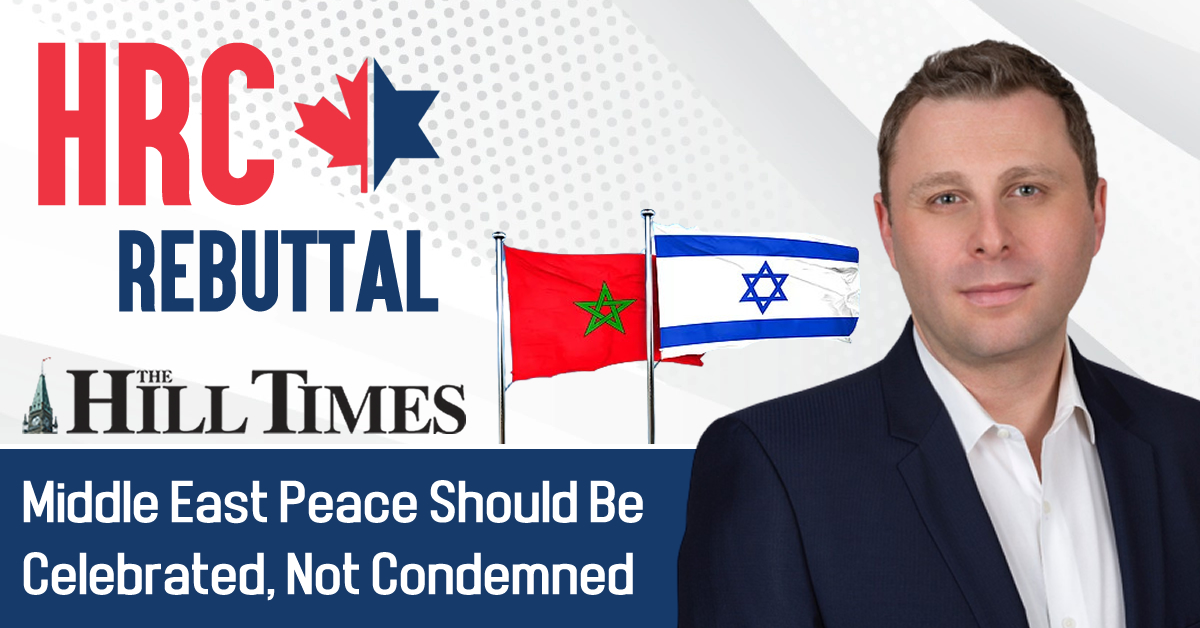 On October 10, the Hill Times newspaper published the following letter by HRC Executive Director Mike Fegelman which argued that Middle East peace should be celebrated and not condemned:

In a recent October 3 letter in The Hill Times, Michael Bueckert of Canadians for Justice and Peace in the Middle East (CJPME) took issue with a recent op-ed by CIJA’s Richard Marceau, lauding the recent peace agreement between Israel and Morocco, claiming that Israel has been “belligerently occupying someone else’s territory for decades,” and referring to Israel as a rogue, authoritarian regime. These claims are utterly without basis in fact.

Contrary to widely disseminated misinformation, Israel is not occupying anyone’s territory. Bueckert is presumably referring to Judea & Samaria (West Bank), home to both Israelis and Palestinians. The vast majority of Palestinians there live under the control of the Palestinian Authority (PA). More to the point, Judea & Samaria is not now, nor has it ever been a sovereign Palestinian state. According to international law, not to mention simple reason, Israel cannot be occupying the territory of a country that has never existed, though the Jewish State has repeatedly extended its hand in peace many times, only to have its offers rejected by the Palestinian Authority.

Bueckert’s references to Israel as a pariah and authoritarian state are simply absurd. Israel is a vibrant liberal democracy, where peoples of all faiths enjoy equal rights under the law – in stark contrast to the majority of the Middle East. And today, the biggest Middle Eastern pariah is not Israel, which enjoys a rapidly growing list of diplomatic wins, but the Palestinian Authority, whose long-time intransigence is finally causing much of the Arab world to make peace with Israel, with or without the Palestinians.

The Palestinian failure to negotiate in good faith with Israel has caused many countries like Morocco to establish or otherwise deepen ties with Israel, even in the absence of a deal with the Palestinians. That is precisely why Israel and Morocco signed a normalization agreement, creating formal diplomatic relations for the first time ever. Successes like these and peace in the Middle East should be celebrated, not condemned.